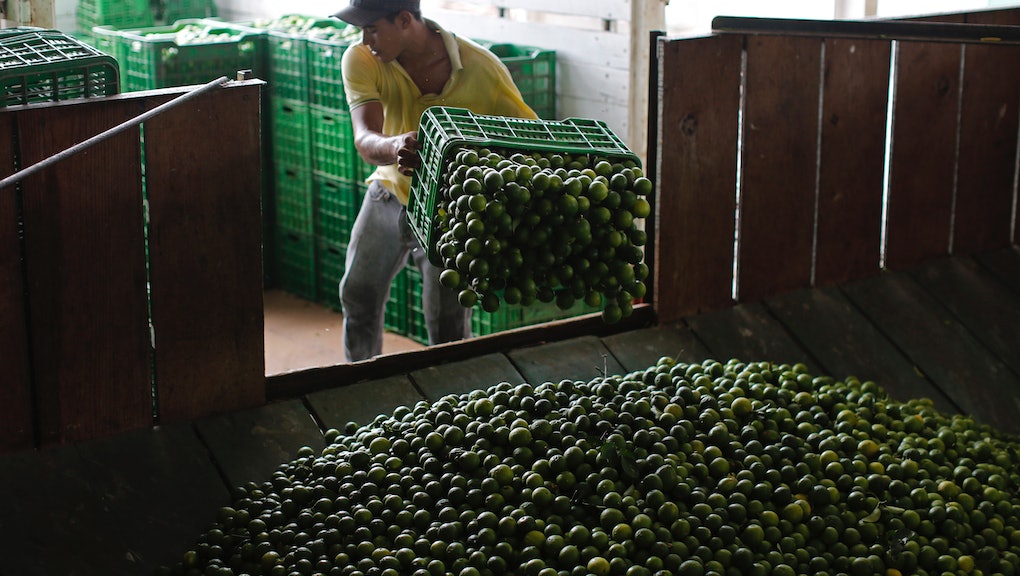 There's a Lime Shortage in America, And the Reason Is Straight Out of a 'Breaking Bad' Episode

Most people don't really spend their time thinking about limes, the tangy green fruit we use in margaritas and as food garnishes. But across the country, people are starting to take notice as the price of limes skyrockets — $100 for a 40-pound box, from $25 a year ago. The reason? A Mexican cartel war.

Mother Nature had already been threatening Mexican limes for a while: A severe drought was followed by the spread of a bacterial disease (huanglongbing) that attacks citrus trees, then by a harsh winter that killed tree blossoms. As the lime supply grew more and more valuable, a Mexican gang saw an opening for an investment opportunity.

In the southwestern state of Michoácan, where most Mexican limes are grown, the notorious Knights Templar gang started hijacking lime trucks and demanding ransoms from farmers. Since the limes are so valuable — nearly $300,000 per truck — a farmer usually paid the extortion fee and moved along. But some were putting their lives on the line to protect their livelihood from the cartel.

"So what they've done over the last couple of years, is that, if they're nice, they put humongous taxes on the farmers. If they're not nice, they just kill farmers and take the land and take over lime production themselves," says journalist Gustavo Arellano. The farmers essentially have no choice other than to defer the cost to customers. "So when you have such chaos in the region, price speculators are just going to drive the price of limes up."

Michoácan is the biggest lime supplier in the world, and the ripple effects could be felt far outside its borders. The U.S. alone receives more than 95% of its lime supply from Mexico, and limes are now sold at grocery stores for around $1 each.

But not everyone was taking the abuse lying down. Vigilantes began rising up against the Knights Templar, eventually forming into heavily-armed local militias. Though the Mexican government was hesitant at first, it eventually teamed up with the militias to take down the Knights Templar. The gang has since retreated, with its leaders hiding out in caves.

Still, the lime crisis continues. The power vacuum has been filled by these armed militias, with around 15,000 to 20,000 vigilantes roaming the region. There are reports that some are demanding quotas from farmers or have ties to rival cartels — perpetuating the cycle of violence and intimidation that led to the uprising in the first place.

So while the cartels, the militias and the Mexican government duke it out, the true losers in the fight are the innocent farmers who are simply trying to make their living. It's something worth remembering the next time you buy that bag of limes.