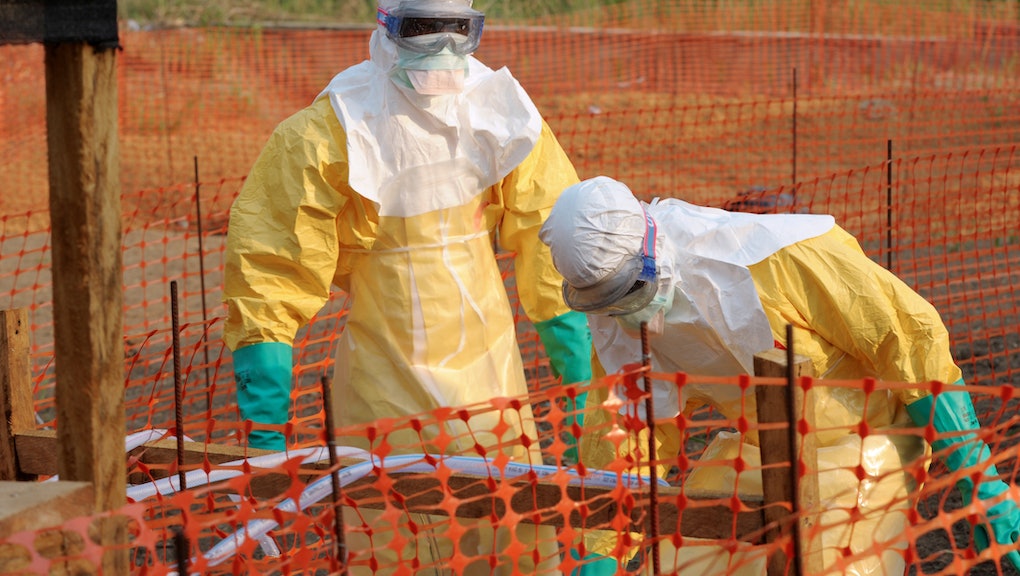 The ongoing Ebola outbreak continues to ravage West Africa, fueling fear and paranoia as authorities try to educate the panic-stricken public on what's going on. Aid workers are now describing the situation as an "unprecedented epidemic" with the potential to spread far beyond the region.

How did the outbreak begin? Guinea's ministry of health first reported 86 cases of Ebola on March 24. All of the cases were from four southeastern districts: Guekedou, Macenta, Nzerekore and Kissidougou. By Mar. 27, four confirmed cases were found in Conakry, the capital of Guinea. Since then, the virus has crossed borders to spread to other countries.

The definitive cause of the outbreak has yet to be confirmed, although authorities suspect that it may have initially started by people eating bats. Fruit bats are considered a delicacy in Guinea despite the fact that they are the natural hosts of the Ebola virus. The government has now banned eating bats to prevent the disease from spreading further.

What is Ebola? The Ebola virus spreads through contact with infected people or animals, mostly through bodily fluids such as blood, saliva and sweat. Nearly 90% of people who contract Ebola die.

The virus causes viral hemorrhagic fever, which affects multiple organ systems and is accompanied by external and internal bleeding. Currently, there is no known cure or vaccine for the virus; health care workers can only isolate the patients and treat their complications.

Since its discovery in 1976, Ebola has been mostly limited to Central and West Africa. The last major outbreak took place in the Democratic Republic of Congo in 2012, killing 29 people. Around the world, Ebola is estimated to have affected 1,800 people and killed 1,300.

How bad is this outbreak? More than 90 people have died already in Guinea and Liberia. A young girl in Ghana has also died of viral hemorrhagic fever, although authorities are waiting on lab results to confirm whether she had Ebola. A case of the virus has also been reported in Mali, and there have been two suspected deaths in Sierra Leone as well.

The current outbreak is also believed to be that of the Zaire strain, considered the most deadly strain of five Ebola strains.

But as of now, the most pressing issue may be the public reaction. In Guinea, fear and misinformation have incited a riot against international aid workers in the area. Believing that foreigners brought the disease, locals in the rural town of Macenta attacked a Médecins Sans Frontières (Doctors Without Borders) treatment center last week.

"We have evacuated all our staff and closed the treatment centre," MSF spokesperson Sam Taylor said. "We're working with the authorities to try and resolve this problem as quickly as possible so we can start treating people again."

What measures are being taken? In order to contain the outbreak, countries are enforcing more strict travel restrictions and screenings. Senegal has closed its border with Guinea, while Morocco has stepped up border control. Anyone flying out of Guinea also has to fill out a health form and have their temperature taken; those with a fever will be tested for Ebola.

Will the epidemic grow bigger? Because Ebola requires close contact with body fluids, authorities believe that it won't spread too far if those with the virus are quickly isolated. Despite the worrying size of the epidemic, the UN maintains that "this outbreak isn't different from previous outbreaks," and that traditional methods to combat Ebola — quarantine, protective gear, public health education — are effective.