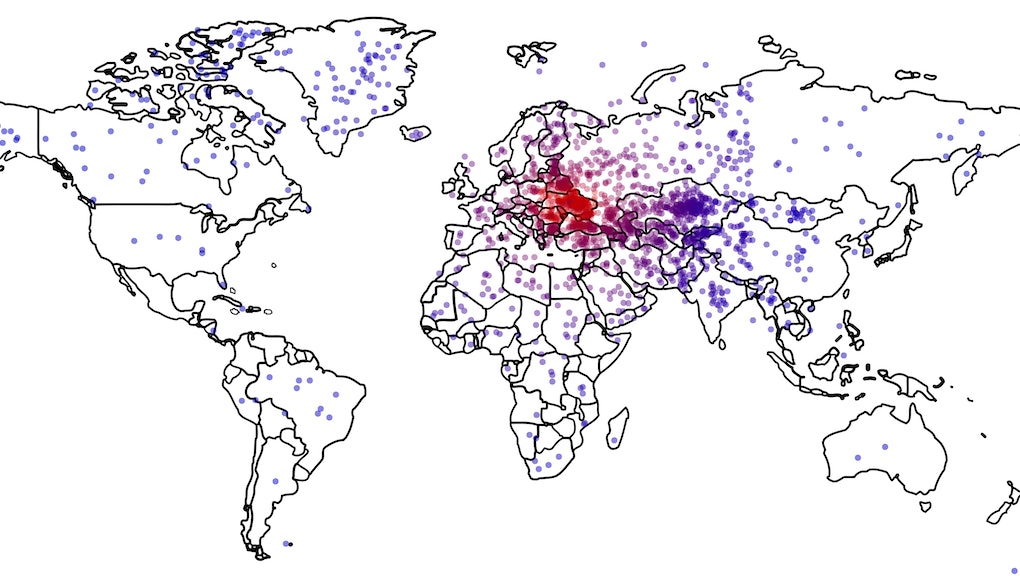 Where Do Americans Really Stand on Ukraine? Connect the Dots on This Map

Turns out many of the people calling for a military intervention in Ukraine as a response to the illegal Russian annexation of the Crimean peninsula have one thing in common: They have no idea where Ukraine is on a map.

No, really. According to polling data from political scientists Kyle Dropp (Darthmouth), Joshua D. Kertzer (Harvard), and Thomas Zeitzoff (Princeton), there's a direct statistical correlation between not knowing where Ukraine was and wanting the United States to intervene with military force. The researchers asked a national sample of 2,066 Americans at the end of March about their demographic characteristics as well as their general foreign policy attitudes. Then they asked to the respondents to pinpoint Ukraine on a map, which is where it gets pretty dicey. The results can be seen above; the dots shift from blue to red as they near the actual location of the conflicted country.

Not great. It's a pretty sad showing in general. Just 16% of Americans correctly identified Ukraine even after weeks of major national news coverage. At least one person thinks it's in Florida, while a whole bunch think it's Greenland. But the researcher also demonstrated something more insidious. From their op-ed:

"... the further our respondents thought that Ukraine was from its actual location, the more they wanted the U.S. to intervene militarily. Even controlling for a series of demographic characteristics and participants’ general foreign policy attitudes, we found that the less accurate our participants were, the more they wanted the U.S. to use force, the greater the threat they saw Russia as posing to U.S. interests, and the more they thought that using force would advance U.S. national security interests; all of these effects are statistically significant at a 95 percent confidence level. Our results are clear, but also somewhat disconcerting: The less people know about where Ukraine is located on a map, the more they want the U.S. to intervene militarily."

In other words, belligerence is directly connected to ignorance, as long as you accept the authors' fairly agreeable point that "information, or the absence thereof" is capable of influencing Americans' policy attitudes and views on individual politicians' ability to control the agenda.

The split isn't partisan in the traditional sense, with the polling demonstrating that just 14% of Democrats and 15% of Republicans — but 29% of self-identified independents — could locate the country. Young adults aged 18 to 24 years olds (27%) and college graduates (21%) were among the most likely to find Ukraine, but as the authors depressingly noted, that second number isn't much higher than the 18% of Americans who told Pew that President Obama is a Muslim in 2010.

Money talks. Fortunately, Americans did show restraint when the costs of blood and treasure were made clearer. While 45% supported boycotting the G-8 (which Russia is now no longer a member of), just 13% want boots on the ground. But — and it's hard to overstate this point — ignorance kills. People who have incomplete information on a topic are prone to making rash decisions, especially regarding a stressful issue. And America's short-term history is likewise not encouraging. It's difficult not to see the poll results and be reminded that after three years of combat and 2,400 American fatalities, two-thirds of Americans aged 18-24 couldn't find Iraq on a map.

You could argue that knowing a country's precise geography isn't completely necessary to understanding its role in international affairs. But it might be slightly more important to know just where a country is before you decide to blow it up.