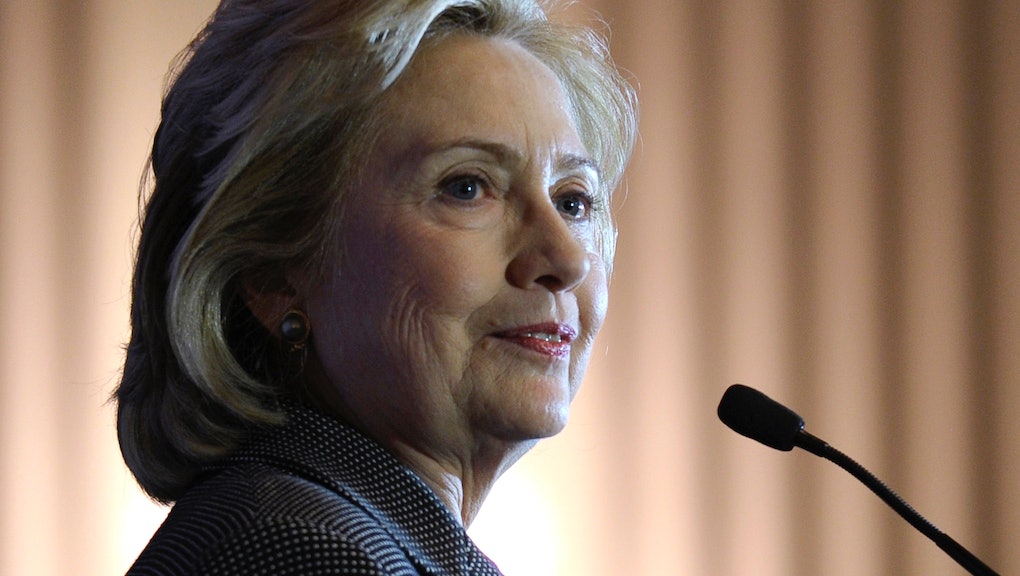 The Global Gender Gap Index Is Out, And America's Rank Is Even Worse Than We Thought

At the annual Women in the World Summit last Thursday hosted by veteran Vanity Fair and New Yorker editor Tina Brown, New York Times columnist Thomas Friedman coyly asked former Secretary of State Hillary Rodham Clinton about a future job she'd be interested in, a favorite topic of speculation among Democrats and Republicans alike who have their eye on the 2016 presidential election.

"Comptroller of the State of Illinois, or something?" he teased. "You know what I mean …"

"Not right now. Not right now," Clinton answered. Friedman pressed on, imagining a world in which Managing Director of the International Monetary Fund Christine Lagarde, who was being co-interviewed, was president of the European Commission and Clinton was the next president of the United States.

It's an idealistic image. Lagarde, who is not a declared candidate for European Commission president, has already been lauded by the Economist as being "the best woman for the job" if elected, and the prospect of Clinton in the White House already has polls buzzing and super PACs forming, despite no official campaign announcement. Nevertheless, Friedman's fantasy about Clinton breaking the Western political glass ceiling roused the audience, leaving behind a palpable sense of empowerment.

But coupled with this excitement is the reality that we haven't come that far in terms of women's and human rights across the board. Amid a culture of technological innovation and industrial modernity lurks a society still plagued with gender injustice. We're really not as progressive as we think.

Since 2006 the World Economic Forum has annually released the Global Gender Gap Index to provide a perspective on economic, political, educational and health-related gender disparities around the world. Since the United States is, after all, the land of the free, one would think that we'd rank highly. Yet the U.S. was ranked 23rd out of 136 countries in 2013, far behind five-year front-runner Iceland.

In fact, the U.S. scores were fairly lousy on several indices, including being ranked 40th for labor force participation, 67th for wage equality and having one of the highest rates of maternal mortality for a developed nation. Political empowerment scored no better, with America earning a big fat zero in the "years with female head of state" category. To put it plainly, if our nation was a basketball team, we'd be the Duke of this year's March Madness.

The underrepresentation of women in politics isn't confined to our country, of course, but it's telling to note how many countries around the world have already elected a female head of state.

Take Brazil, which elected Dilma Rousseff as the country's first female president in 2011. Since her inauguration, she's tackled corruption and initiated the Stork Network to combat maternal mortality and improve prenatal health. While maternal mortality is higher in Brazil than in the United States, their childcare ecosystem has longer maternity leave and provides maternity leave benefits, as opposed to our country's nonexistent national program.

When countries like Brazil, Argentina, Iceland, Ireland, Sri Lanka and Kyrgyzstan elect female leaders, it sends a powerful message about gender equality in politics, one on which our nation still has to get onboard.

So what does this say about the United States and the global status of gender equality? It says that we've got a long way to go. As Louis C.K. lamented in his recent Saturday Night Live monologue, it hasn't been that long since American women secured the right to vote in 1920, making our democracy actually only 94 years old.

That's not even taking into account Jim Crow laws, which worked to suppress the African-American vote until the Voting Rights Act was passed in 1965. One could also argue that our democracy didn't start until 1973, when the Supreme Court recognized a woman's right to an abortion, which would put our "democratic age" at an even more pitiful 41 years old.

Or, one could argue that we still don't live in a democracy, since the human rights of the LGBTQ community are still challenged, voting rights of private citizens are leveraged against big corporate money, women are still fighting for their reproductive freedom and the ever-powerful white capitalist patriarchal agenda continues to perpetuate deep economic divides between races and classes.

If the U.S. wants to be a world leader, we need to address this global gender disparity. UN Women and the Inter-Parliamentary Union's Women in Politics Map 2014 report notes that only 5.9% of women are heads of state and just 7.8% are heads of government. For those keeping score, that means men hold roughly 86% of worldwide political leadership positions.

If this is what the world looks like when the majority of power is allocated to men, imagine what a paradigm shift could do to preserve gender justice and human rights. It's time for our nation — and all nations — to step up and start taking gender equality seriously.

In the words of Queen Bey, it's time that far more girls have the chance to run the world.