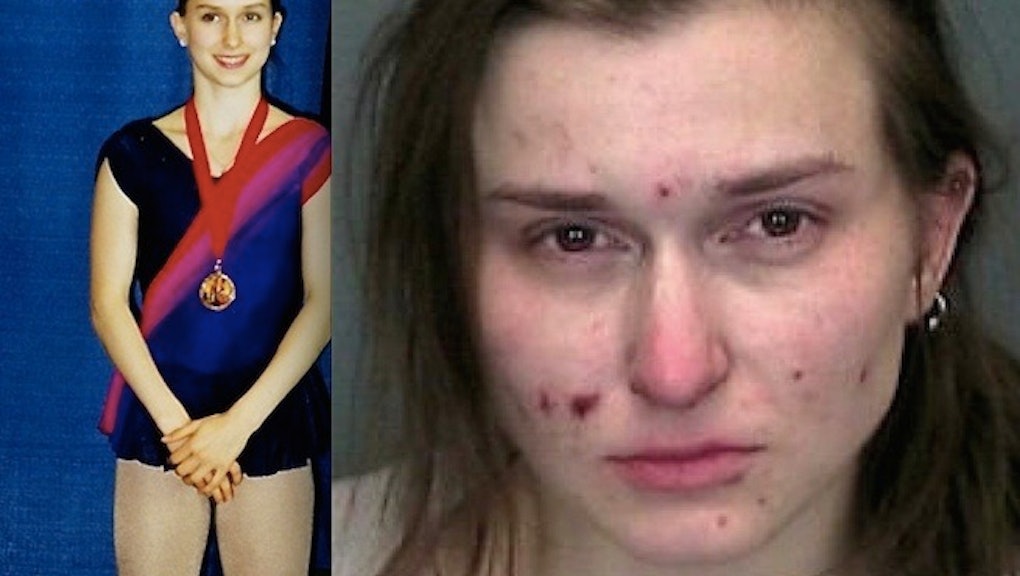 "I want a cigarette. I know I have a cigarette here. Which friggin pocket did I put it in? I'm patting myself down frantically trying to find this damn pack because nothing makes me want a cigarette like the massive shot of heroin I just did."

Thus opens the first chapter of Keri Blakinger's manuscript of her book IV League — a title, purposely misspelled, that alludes to her drug use during her time at Cornell University from 2007-2010. She wrote the book, which she finished in January, because she found that people she met in prison were fascinated by her story, as it wasn't a "particularly common prison background story," she said.

In the book's opening, she proceeds to describe the panicked episode that occurred in December 2010, when she was just days away from finishing what was supposed to be her last semester.

"So here I am walking back to my house with my Tupperware full of smack, and I can't find this damn cigarette for the life of me." A policeman showed up, responding to a call about a suspicious person. "He damn sure appears to have materialized out of thin air," Blakinger wrote. She tossed the container — which held six ounces of heroin, worth over $50,000 — underneath a parked car nearby. She thought she was free and clear, but a middle-aged woman approached, holding the container out to the cop.

The officer asked Blakinger, 26 at the time, to empty her pockets. "Shit, empty out my pockets? There's an eight ball of coke and 20 80-milligram Oxycontin in the pockets of my black Tripp pants," she wrote in the manuscript. "I take out the coke with my left hand and as I'm handing it over, I take my right hand and pop all 20 pills into my mouth and swallow them dry."

For a comparison, a doctor might prescribe a patient to take one or two 5 or 10-milligram doses of Oxycontin per day when recovering from surgery. Blakinger swallowed 1,600 milligrams. She describes the hours that followed as a series of "snapshots of clarity surrounded by dense pillars of cognitive fog." There was a flash of handcuffs, of an interrogation room, an arraignment, an orange jumpsuit, a metal toilet and shower "caked in vomit."

She was not offered bail because she had six ounces of heroin in her possession, an extreme quantity. (A bag of heroin, or one hit, is .1 grams. There are about 28 grams in an ounce, so Keri's six ounces translates to 1,600 "doses" of heroin.) She was planning to keep some of it herself and sell some of it to continue supporting her habit.

On Dec. 19, 2010, she was charged with criminal possession of a substance in the second degree. Because she had over four ounces, the crime was classified as an A-II felony.  She was offered a class B felony charge in a plea deal and accepted. She was sentenced to two and a half years in prison.

Blakinger served the majority of her sentence at Albion Correctional Facility, a medium-security prison exclusively for women in Orleans County, New York. The facility — situated between Rochester and Buffalo — holds roughly 1,000 inmates. She was released on a two-year parole in September 2012.

As the other prisoners pointed out to her, Blakinger's background doesn't exactly foreshadow a future felony conviction. Blakinger, now 29, is from Lancaster, Penn., a small city with a population of about 59,000. She has a younger brother, 25, and her parents — who both attended Ivy League schools — are still married.

She was a passionate and talented athlete who started figure skating at age 8. When she was 11, she developed anorexia and bulimia. She said that she couldn't definitively blame skating for her eating disorders, but that it "probably contributed." She began pairs skating at 13 and realized she was competitive in the sport at age 14, when she was landing double axels, "a major stumbling block for many." She said in a phone interview, "[Skating] was my passion, my plan for the rest of my life."

In 2001, when she was 17, her skating partner of several years decided to branch off.

She already had tendencies toward self-harm, but facing a possible end to skating catapulted her into a dangerous depression. She started experimenting with drugs and quickly gravitated toward heroin. "I was floundering for something," she said. "It happened really quickly. I was in a place mentally where I was incredibly self-destructive." She said that she did not use drugs to feel better; she used them "to feel less." Blakinger struggled to find another partner, as there were far fewer males in the sport. She started to panic. "You've been taught at 15 that you're reaching middle age," she said. "At 17, I'm hearing the clock ticking, so I was distraught. ... I just fell apart in general."

School was always her measure. "I justified that it was okay as long as I could continue to maintain decent grades and not get kicked out of school. … I just chose to look only at those factors and ignore all the other damage it was doing in my life."

She graduated from high school and began college at New Jersey's Rutgers University in the fall of 2002. She transferred to Cornell in the spring of 2007 at age 22. She'd always wanted to go to an Ivy League school because both of her parents did. She added, in addition, "I wanted some sort of change in my life. … What I wanted was some direction, really. And so I thought transferring to another school could do that." Her parents shared in the same hope and interest in her getting through college.

But moving to Ithaca, N.Y. did not inspire a new start. "I was still using [drugs] off and on. … I was still drifting since the skating, and had turned to drugs and become very depressed." Suicide was "something [she'd] been contemplating," and after one semester at Cornell, she jumped off the Stewart Avenue Bridge. "I was coming undone at that point," she said. She fell 98 feet but only broke her back and didn't suffer any permanent damage.

Following the incident, she took a year off and saw a therapist at the school health center sporadically. She continued to use heroin throughout the rest of her time at Cornell, but managed to write for the school newspaper, The Cornell Sun, and maintain As and Bs until her arrest. "No matter how depressed I was, I guess I had instilled in me from a young age the importance of education. My mom is a teacher and my parents both went to Ivy Leagues," she said. "No matter how much my life would fall apart, that was the one thing I wanted to keep together."

She didn’t quite keep it together, though. By December 2010, the top skater and English major was tossing a container holding six ounces of heroin underneath a parked car.

Blakinger is bright, articulate and talented. Carrying $50,000 ounces of heroin was beyond her better judgment. Dr. Arnold Washton, executive director and co-founder of Compass Health Group in New York City, has been working with high-functioning addicts for 30 years. In a phone interview, he said, "It's not so simple," Washton said. "You can't start applying logic to a problem that is fundamentally irrational. … It doesn't matter if the person is the president of the United States or a factory worker."

Dr. Andrew Tatarsky, the director for The Center for Optimal Living in New York City, traced Blakinger's path from childhood. "Here is a person who was struggling from a very early age," he said. Her eating disorders signal that she put an intense amount of pressure on herself, creating tremendous anxiety. Her decision to try heroin suggests "self-hate," he said. By the time her brain chemistry changed and her brain became addicted, she was likely in a "vicious cycle of isolation of despair."

Washton said, "In every case, I could say without exception, did they know better? Yes." He went on, "If I.Q. and success gave people immunity to addiction, the population of people with addictions would be much narrower. Addiction is an equal opportunity disease. … It's not stupidity. That is for sure." Blakinger compares the behavior of addiction to repeatedly returning to an ex that you know is bad for you. "Addiction is sort of like that. You know you shouldn't be doing it, but you do anyway."

Tatarsky emphasized that addiction is a "very, very complex process." He said that it's treated as a criminal issue when it is actually a "health and human" issue. Still, a vast number of people continue to stigmatize addiction; they have yet to realize that it's not an affliction reserved solely for the underbelly of society. In the documentary A Hungry Heart, Dr. Fred Holmes, who treated young addicts for years, said, "They don't look different, talk different, walk different. They're just like the others who are our children. It's just that the nature of their disease is difficult and more challenging."

The orange jumpsuit compounds the already existent judgment. And it further separates that person from the rest. From us. But in fact, that person was the girl next door who went off to an Ivy League university.

Blakinger decided to get clean when she was in jail. She said it was the first time she was the only sober person in the room seeing "all these other people be high." She thought they looked "stupid and embarrassing," and realized "[She] didn't want to be the one person in the room that was the fuck-up."

She plans to graduate from Cornell. She has two classes left to complete her degree. And of course, she's determined to publish her book. She's currently looking for a publisher.

"One of my hopes for [the book] is that it will humanize inmates to people," especially for readers who think of them "as people that aren't like you."