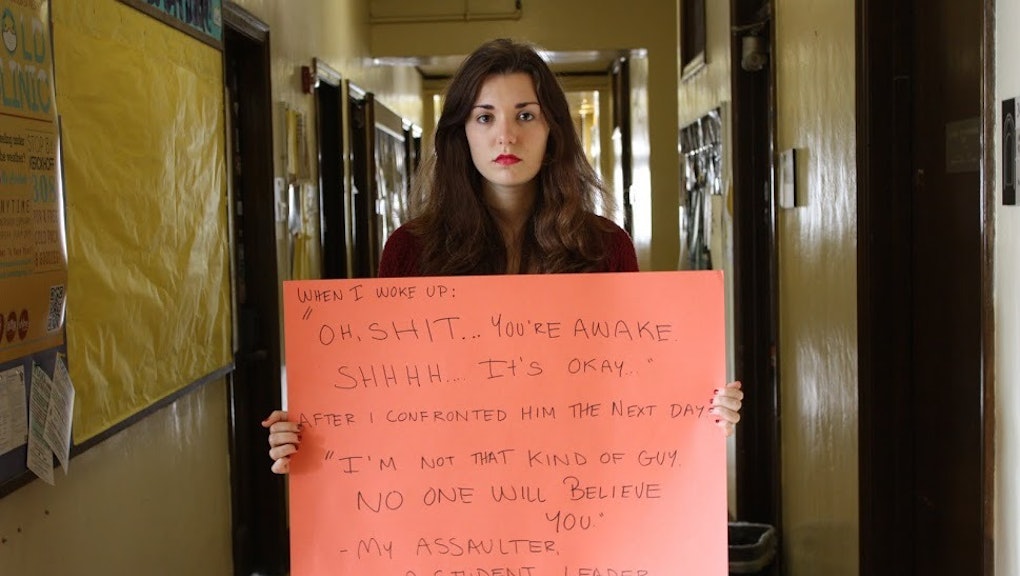 On March 31, an anonymous Harvard student published a searing op-ed in the Crimson, the university's student-run newspaper, criticizing the school for its poor handling of sexual assault cases. The piece came directly on the heels of two other high-profile incidents highlighting the urgent reality of rape culture on college campuses. Just five days prior, BuzzFeed published a damning exposé about the "sexual assault civil war" at Occidental College. Two weeks before that, more than 50,000 people signed a petition started by the women's advocacy group UltraViolet demanding Dartmouth "take action immediately to curb [its] sexual assault crisis."

Colleges clearly have a problem, and students aren't willing to stand for it any longer. From coast to coast, brave student activists are taking a stand for survivors and holding those in power accountable.

A poster from the student advocacy group 7000 in Solidarity at UCLA.

As daunting as it is to go up against a school administration, it's more important than ever for students to do so. Studies show that 1 in 5 women will be victims of completed or attempted sexual assault during their college career, yet less than 5% of assaults get reported to law enforcement. Too often campuses promote an atmosphere of silence, discouraging survivors from speaking out to due to fear of punishment or retaliation.

With President Obama's recent creation of a task force to coordinate federal enforcement efforts on school campuses, there has never been a better time to keeping fighting. In honor of Sexual Assault Awareness Month, eight of the most inspiring young activists across the country told PolicyMic about the realities of fighting institutionalized rape culture. Here are their ideas for how to make campuses safer for everyone.

Ariella is a sophomore at George Washington University, where she is the On-Campus Representative for the Feminist Student Union and the Head Peer Educator at Students Against Sexual Assault. She is currently working to get sexual assault resources and Title IX language included on the back of student ID cards and class syllabi. Ariella was featured in the 2011 documentary Miss Representation.

"When I asked students about their understanding of Title IX , I commonly found that individuals either had no prior knowledge or associated it with women and sports. Considering the realities of campus sexual violence, it is essential students know their rights and the contact information for the Title IX coordinator."

"I think one of biggest obstacles to dismantling rape culture is universities not acknowledging it's existence and problematic effects. By neglecting to recognize rape culture, institutions can not fully take action to create safe environments or make institutional changes reflecting the needs of the community."

Savannah is a junior at UCLA and the Campaign Manager of 7000 in Solidarity, a sexual assault prevention group behind projects like #AlcoholIsNotConsent (featured in BuzzFeed) and a pledge card campaign that empowers students to be active in talking about consent. Savannah came out as a sexual assault survivor to her school paper in September.

"We cannot make strides to end violence against women if we do not acknowledge violence against men. And, in terms of male allies, we need to redirect the conversation from 'you are the aggressor' to 'you can be the solution.' Instead of '5% of men commit 95% of sexual violence,' we can say '95% of men know sexual violence is wrong and don't do it, be an effective bystander.'"

"For our art exhibition, '7,000 Rising: A Consent Revolution,' we left a wall of the gallery barren with only three posters that had negative quotes by administrators to survivors. We left underneath those three posters a pile of colored papers, posters, pens, and tape with a sign saying 'Add your own story.' Students passing through the gallery filled the wall with stories, quotes, thoughts, and much more. It was so beautiful to see the reaction by students."

John is a junior at Tufts, where he is involved with the sexual misconduct task force and is an organizer of the student group Consent Culture Network. He also works with the Know Your IX and the ED ACT NOW campaigns, focusing on male and queer survivors' experiences. He has been featured on CNN, Feministing and Jezebel.

"I first got involved in advocacy around sexual violence after coming to terms with my own experiences of intimate partner violence and rape. I went through my school's sexual misconduct adjudication process, and realized just how dehumanizing and ineffective a system that was, and how much it disenfranchised queer students and male survivors."

"College administrators still stonewall students across the country. Until schools are willing to own up to their own failures and take responsibility for the tremendous harm these traumatic policies have had on students, and truly begin to be trauma-sensitive in their approach, rape culture will permeate higher education. Students have brought about tremendous change, but that culture shift among administrators is something I have yet to see."

Nowmee is a sophomore at Emory University originally from Dhaka, Bangladesh. She is a Student Coordinator for RespectCon, a conference held by Emory's Respect Program (an organization dedicated to preventing and responding to sexual assault and relationship violence on campus). Nowmee recently received the undergraduate Unsung Heroine Award from the Center for Women at Emory.

"I think one of the biggest obstacles is getting people to realize that rape culture exists. I think a lot of people are hesitant to talk about sexual violence and view it as a taboo topic even though our culture, especially popular and media culture, is inundated with sexual images/sexual violence. This is one of the great ironies of rape culture — people don't think twice about making a rape joke yet shy away when talking about consent."

Meghana is a senior at the University of Michigan, where she is the coordinator for the Sexual Assault Prevention and Awareness Center's Men's Activism Program. She is working to educate all genders on issues of sexual assault.

"The project I am most proud of has been No Shave November for Consent. Since growing a beard is an inherently masculine activity, it is a unique way of inviting men into a movement that they may have felt alienated from. ... Through this campaign's humor and sex-positivity, participants learn that consent doesn't have to be a stiff or awkward conversation but rather is an important part of sexual activity that actually makes sex better for everyone involved."

"The fact is that the majority of perpetrators are men, so all primary prevention methods on college campuses should have a large male activism component. ... Addressing and altering the way some men are socialized to be sexually coercive won't happen if sexual assault prevention messages continue to be accusatory or exclusive."

Cinneah El-Amin is a sophomore at Barnard College and a peer educator at the Barnard Columbia Rape Crisis/Anti-Violence Support Center. Last fall, she worked with FORCE: Upsetting Rape Culture in creating a viral hoax that replaced Playboy's top-party school list with a list of "top schools practicing consent."

"The biggest obstacle I see is challenging EVERYONE (because everyone — from students to admin — is responsible) on college campuses to rethink their commonly held beliefs in a nonconfrontational and nonjudgmental way. Rape culture is so intrinsically ingrained in our daily social lives that sometimes it's hard to plainly see."

"I feel proud to be in this moment — I see college campuses all over, in particular, where I attend (Columbia University) shifting their cultures to engage with issues around sexual assault."

7. Our Harvard Can Do Better, Harvard University

Our Harvard Can Do Better was founded two years ago and is devoted to "advocating for survivor-centric and intersectional reform of Harvard's sexual violence policies." The group recently filed a Title IX complaint to the Office of Civil Rights.

"As we mentioned in our op-ed, Harvard has a culture of victim-blaming and administrative indifference that makes it difficult for survivors to seek the help they need. ... We believe it impossible to create a culture supportive of survivors in the context of an institution that consistently marginalizes them — and far more difficult to build a culture of peers holding perpetrators of sexual assault accountable when the administration and disciplinary bodies of the school don't even do so. We are hopeful that a possible OCR investigation of Harvard and the current attention to this issue on campus and in the national media will precipitate critically-needed policy change."

Emma Goldberg is a sophomore at Yale University. She is the Outreach Coordinator at the Yale Women's Center and a student representative on the Title IX Committee.

"Thanks to incredible advocates around the country, we're well on our way to addressing rape culture. It can get challenging because of administrators who drag their feet, survivors who get silenced, activists and allies who get burnt out, and the very fact that we're addressing such insidious and deeply ingrained behavior. We can become desensitized to shocking statistics about rape on college campuses, and simply come to accept the status quo — but we have to remember that we can do better, and we can push our communities to do better."

All images courtesy of the students and used with permission.

If you or someone you know has been affected by sexual violence, it's not your fault. You are not alone. Help is available 24/7 through the National Sexual Assault Hotline: 800-656-HOPE and online.rainn.org.