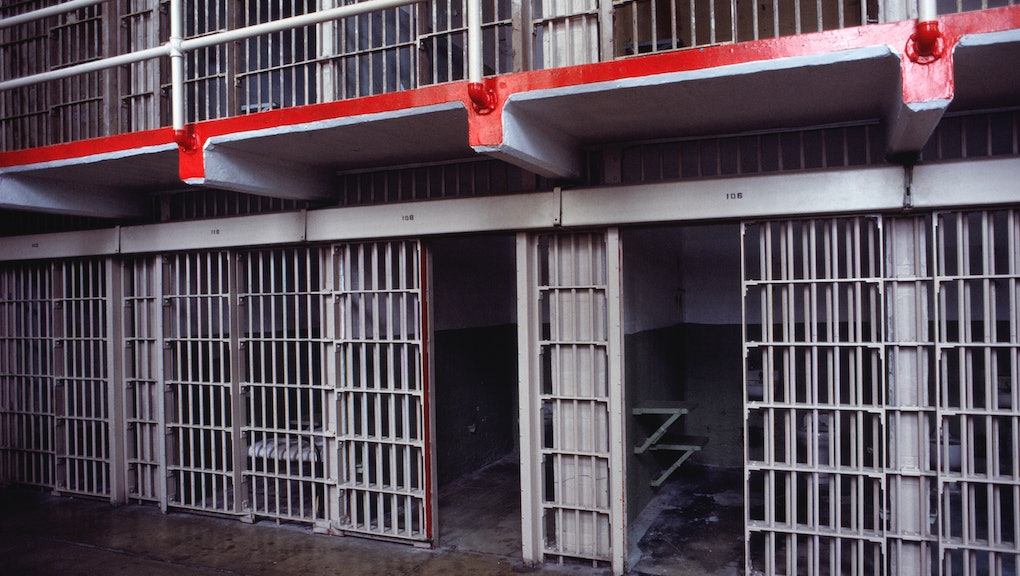 The news: A new report from the Treatment Advocacy Center says over 10 times as many mentally ill inmates are languishing in the nation's prisons as are receiving treatment in American hospitals and mental health facilities. In 2012, a combined 35,000 patients were being treated or held in state psychiatric hospitals. But 356,000 of the mentally ill were in prison or jail. Forty-four of the 50 states, as well as the District of Columbia, have at least one jail that holds more inmates with severe mental illness in a correctional facility than they do in a treatment program.

"The lack of treatment for seriously ill inmates is inhumane and should not be allowed in a civilized society," says TAC founder and lead author Dr. E. Fuller Torrey. "This is especially true for individuals who — because of their mental illness — are not aware they are sick and therefore refuse medication."

An infographic by Mother Jones' Brett Brownell shows just how stark this problem is:

And when you look at the state of mental health funding across the nation, it's pretty pathetic. The U.S. is more or less not even trying to combat mental illness, observes Mother Jones:

This bleeds over. And this disparity applies to other sectors like education. Holding prisoners isn't cheap, especially ones with psychological problems. In Washington state, the most seriously mentally ill prisoners cost a whopping $100,000 per prisoner in 2009. Most states are spending three to four times as much per inmate as they are per student; California spends $47,000 per inmate and $9,000 for every student. In New York, that's $56,000 per inmate and approximately $16,000 for every student. Michigan pays about $34,000 per prisoner and just $11,000 for a student.

In many states, a year of prison costs more than a year of tuition at Harvard. It doesn't take a genius to reason that spending so much more on a prison system that demonstrably fails to help people than basic education is leading to far worse outcomes than one that allocated resources in a sane manner.

What does this mean in practice? Mother Jones compiled a few key observations from the report:

One Mississippi deputy at the Hinds County detention center described his facility: "They howl all night long. If you're not used to it, you end up crazy yourself." An inmate in the jail "tore up a damn padded cell that's indestructible, and he ate the cover of the damn padded cell. We took his clothes and gave him a paper suit to wear and he ate that. When they fed him food in a Styrofoam container, he ate that. We had his stomach pumped six times, and he's been operated on twice."

Our failure to adequately treat the mentally ill has consequences reaching far beyond just prisons. When mentally ill people don't receive the care they need, poorly prepared police end up having to deal with the problem. In 2013, TAC found that at least 50% of lethal officer-on-suspect shootings involved a mentally ill victim. And the Orlando Sentinel found between 1999 and 2002 in central Florida, of 428 reported police killings, 30 followed after family members called to report a suicidal person.