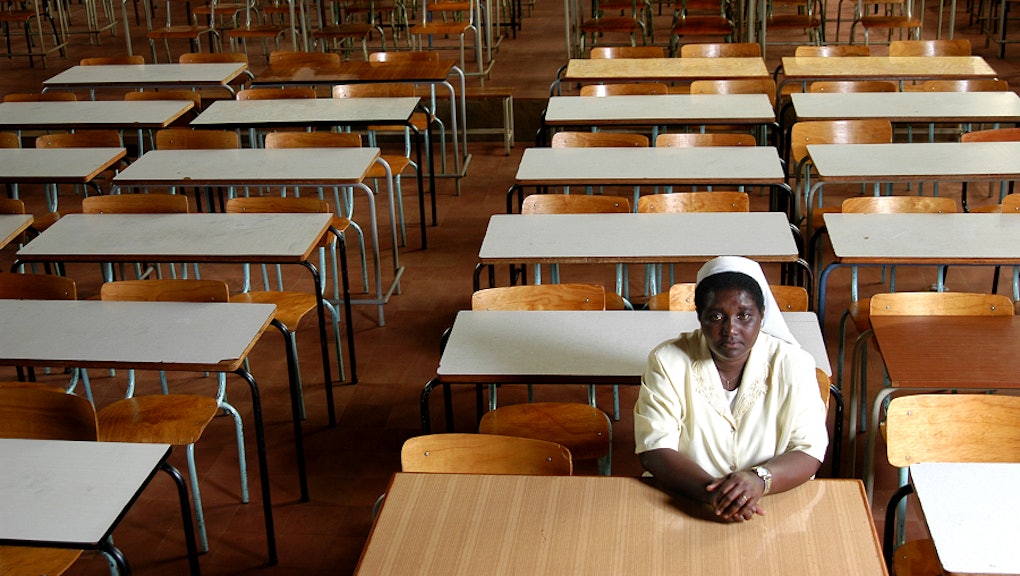 Would you have the courage to protect someone your country told you to hate?

On Monday Rwanda launched a week of official mourning to commemorate the 20th anniversary of the 1994 massacres in which more than 800,000 people were slaughtered in just 100 days by ethnic Hutu extremists, targeting members of the minority Tutsi community and political opponents. While the rest of the world stood by, however, some people stood up.

Resisting the prejudice and violence around them, these ordinary Rwandan citizens risked their lives to save their Tutsi neighbors, showing the power of moral courage and bravery during a time of severe chaos and devastation.

PROOF: Media for Social Justice, a nonprofit organization that uses visual storytelling for genocide prevention and peace-building, highlighted 30 Rwandan rescuers in a 2009 exhibit called "The Rescuers: Picturing Moral Courage" with photographs taken by well-known Italian photographer Riccardo Gangale. What initially started out as a peace-building project between the Hutus and the Tutsis soon became an exhibit of inspiring photographs and stories from the Holocaust and genocides that occurred in Bosnia-Herzegovina and Cambodia as well.

"They're ordinary people that did something in extraordinary times," said Leora Kahn, founder and executive director of PROOF. "They were part of the same society that the killers were in. They were part of the same 100 days when everybody else decided to go along and kill people as part of their job, every day. Their job, instead, was to save the other. They said these are the same people yesterday and they are not my enemy today just because the government is telling me that."

In addition to teaching people to think critically, Kahn said the exhibition allows for "society to heal itself" through the example of these brave individuals who questioned when something is wrong and "stood up to save the other."

Here are 12 Rwandan rescuers who risked everything to save neighbors, friends or strangers in the face of injustice and violence:

When the persecution began against the Tutsi community, Rwanburindi asked several of them to stay with him, caring for those who were injured. He even built them a house when his own was too small for them to live in.

"Many times the local authorities forced me to appear before the bourgmaster, and every time it happened my family would lose all hope of seeing me again," said Rwanburindi. "But at the end of the day, I would return. My neighbors rushed to advise me to evict the refugees from my home as soon as possible, but I told them, 'I know that the only relationship between them and me is that we pray in the same congregation, but I cannot chase God's people from my house.'"

Rurangirwa was just 18 when he decided to hide members of the Tutsi group in his house. He helped dispatch a group of Tutsis to different homes, moving them from one house to another in abandoned houses and banana trees.

"I took the Tutsi side by my own decision. Neither Tutsi nor someone else chose for me what to do," said Rurangirwa. "It was a big problem to find enough food to feed them because there were so many. They ate once in the night. A group of seven ate at home, another three at my mom's house and so on. ... When killers came, we organized ourselves to hide."

Hiding students and families in two dormitories, Sister Helene gave everyone school uniforms and had enough food and firewood to serve one meal per day in the morning.

"I locked everyone inside to hide them, so people who come to steal things wouldn't find the people," said Sister Helene. "The soldiers would abuse me and talk hell, but at the end of it all, they would not get what they wanted, so they would just leave. I was very lucky that the people I was hiding didn't make noise, they were very quiet, and so whenever thieves and killers came, there were no signs of people."

From their hill in Kigeme, Christine Kamunani and her family could see the chaos happening below. When she heard a knock at the door around midnight, she told her children, "Kids, our last day has come. Stay calm. I am the one responsible for this home." She walked out to find some people waiting outside her gate.

"I was scared and praying inside, but I heard God's voice within me saying, 'Don't be afraid,'" said Kamunani. "It was dark and a man said to me, 'We are going to put a huge burden on your shoulder. Are you ready to take it? If not, let us know so we can continue our way.' I replied to that man, 'I am ready to die with you.' I hid them in the barn next to my house."

When a woman at his doorstep asked to be let in, Augustine Kamegeri asked where she had been since the start of the assaults. He learned that the woman, together with her brother and mother, were injured by machete cuts and took shelter in a Hutu neighbor's house. When working in her neighbor's sweet potato field, she saw her brother get taken to Lake Kivu to be drowned, so she ran away.

"I hid her and others in [a] small forest of bee trees that killers wouldn't dare enter. So they would hide in the forest and spend the night among bees," said Kamegeri. "It is true cowardice to not do anything for someone dying right in your sight."

When the genocide began, Silas Ntamfurigirishyari was in a military camp. After visiting a friend's family, he met a group of people, including an old woman and a child, heading back to the camp in a truck full of soldiers.

"They were going to kill them, so I stopped the militias and told them not to waste their time on the old woman, that I would kill her myself," said Ntamfurigirishyari. "They left the woman and the kid with me after I convinced them. We went in the bushes and ... told her not to wander in the forest, but to wait for me. That night I went back and took her to Burundi, with the child she was carrying on her back. I safely returned to the camp without any incident."

"I would tell the killers to kill me first, which for some strange reason they wouldn't do," said Mutsindo. "They all survived. All the 322 of them, God saved those men and women."

More than 50 people from Karabaye, Kicukiro, sought asylum in his house. Only the women found room to sleep while he slept outside.

"One day the soldiers came to our house and asked my wife for her identity card and I intervened. They fought and tried to destroy my kitchen with a gun-propelled grenade. By the will of God, it didn't explode, so lives were spared."

Alice Musaniwabo says more than 100 people took refuge in her house where she and her husband, who was part of the military, taught them how to cook and shared everything they had for a week before they were evacuated. She was pregnant at the time and said she felt sick every time she heard the sound of guns.

"I had 50 people in my house and in the compound and around the house. It was very tiny but people used to squeeze," said Joseph Habineza. "We used to cook in the backyard and women and like fifteen children would go in the house for shelter when it rained, and the men were positioned around the hill to prevent the attackers from getting closer. Men only came in small groups for food and go back in positions."

Half of Habineza's house was destroyed when militia threw a grenade inside. When he stopped them from entering the house, they attacked him with axes, machetes and clubs, breaking his leg.

When Mutezintare Gisimba Damas heard that the president's plane had been shot down on the radio, he went to the nearby orphanage to see and comfort the children. When other people came to hide as well, he gave them food. The orphanage was attacked shortly after they ran out of food.

"They killed them right in front of me after torturing them for a long time, asking them to say where the other adults were hiding in the house. But they never said a word ... They sacrificed their lives to save others." said Damas.

"I believed inside that dying on the side of neighbors and brothers was the best choice other than telling people to go away."

Josephine Dusabimana and her husband hid her neighbors, a man and his two daughters, in their house before helping them escape to Congo with a canoe. Her father warned her that she would get killed if caught with the paddles, so she hid them in sweet potato leaves.

"When I was bringing the paddles, I met some people who asked me if I was planting sweet potatoes," said Dusabimana. "When I replied yes, they said, 'You are lucky to find sweet potato seeds.' I answered, 'I do not know when all this chaos will be over but in the meantime I must keep planting.'"