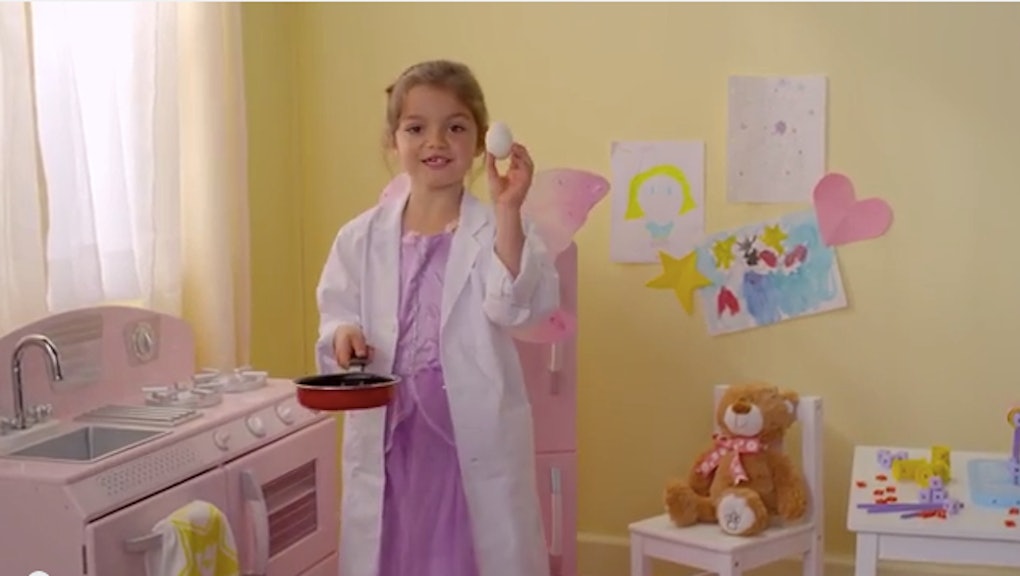 We all remember the iconic fear-mongering advertisement from the '90s: "This is your brain on drugs." It showed some delicious butter melting in a pan as an egg is dropped into the sizzling saucer. This, a male voice informs you, is what happens to your precious head when you're under the influence.

Goldie Blox, a small toy company committed to empowering girls, has decided to take this impactful ad to the next level by showing what a young girl's brain looks like when she's on "princess." Ok, maybe Sleeping Beauty and Snow White aren't as bad as crack, but they certainly have a lasting impact on girl's psychosocial development.

Staying true to its roots, Goldie Blox made sure that a female creative team led the entire production of the video. The video is filled with amusing constructions built by girls sprinkled with little informational tidbits like the one below. Just like the products the company is selling, the advertisement is the perfect mix of fun and smart.

But the video also points to a serious issue that academics and policymakers have raised. Many experts believe the pinkification' of girls' toys has contributed to lower levels of female students in fields like math, science and engineering. Politicians in the U.K. such as Jenny Willott and Chi Onwurah have debated this topic extensively only to conclude that this issue is about more than just play things. As Willott explained in one address, because "children learn through play, it's how they develop skills and interests." If girls never experiment with science kits and math games, how will they ever figure out how to mature those talents?

Although there is no research linking a child's interaction with toys to his or her professional path, numerous studies have disproved that girls are "wired" to like pink stuff. In fact, most research suggests that socialization most dramatically determines what children choose to play with. If you were ever told as a child, "that's just for boys," you know what I'm talking about. Kids are surrounded by these types of sexist messages from the moment they leave the womb, but they also internalize social scripts and follow them religiously by performing something called "self-socialization."

When we look at what's available in toy aisles, Goldie Blox's assertion that girls start losing interest in math and science when they're as young as 7 shouldn't come as much of a surprise. The result: Only 13% of engineers end up being women, according to GoldieBlox. Given that engineering jobs are the fastest growing in the country and that female engineers make 33% more than women in other fields, it's worth analyzing what's stopping girls from being interested in that profession in the first place.

Although some of us played with princesses and ended up fine, it's important to talk about the harms that can be caused by these toys. The "princess phase" hasn't only become highly ritualized and accepted. It has become damaging for girls because they are already being told from a young age that looks should take precedence over actions and brains.

Despite all this depressing data, girls can have it all. Owning a few princess movies doesn't disqualify you from one day becoming a badass scientist. The key element here is choice. Girls (and boys) should be able to choose from a wide array of toys and if you look at the commercial landscape right now, options are severely lacking.

Let's let girls know that the possibilities are endless and encourage them to discover all of them. Who knows, some of them might end up becoming feminist activists. I certainly know a few who did ...