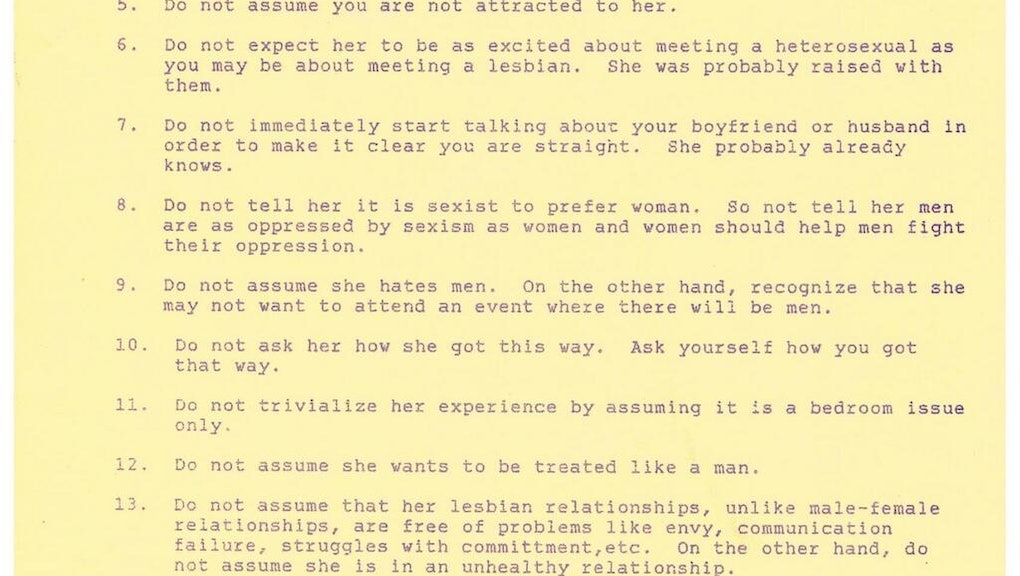 What to Do When Confronted by a Lesbian, as Told by a Rare '80s College Cheat Sheet

It's amazing what you can find when you start digging in the past. Jody Rosen, New York Magazine's pop critic, posted a gem of an "educational" cheat sheet to Twitter, unearthed by one of Rosen's friends during a recent move.

The typed handout is apparently from a 1988 UW-Madison Women's Studies class and is titled, "When you meet a lesbian: hints for the heterosexual woman." PolicyMic read through it and can we just say, this is the guide to meeting lesbians we never even knew we needed!

The handout ends with a homework assignment requiring students to pretend to be a lesbian for 24 hours and asks, "What kind of things do you notice about how different this feels?"

The UW-Madison list appears to have been adapted from an Atlanta Lesbian Feminist Alliance newsletter dating back to 1976, which also included the advice: "Do not assume that her heart will leap with joy if you touch her," and "If you are tempted to tell her she's taking the easy way out, THINK ABOUT THAT."

At first read, these how-to guides seem pretty funny — some people responded on Twitter that it must have been tongue-in-cheek — but the handout left others wondering about the sometimes painfully slow pave of social progress.

LGBT equality has absolutely come a long way in the past few decades. There was a time not so long ago when police departments and schools teamed up to create anti-gay propaganda films.

But it's worth noting that some people could still benefit from a few of the handout's more pertinent pointers:

"Do not tell her it is sexist to prefer women. Do not tell her men are as oppressed by sexism as women and women should help men fight their oppression."

"Do not ask her how she got this way. Ask yourself how you got that way."

"Do not trivialize her experience by assuming it is a bedroom issue only."

As one Gawker reader commented:

Relationships between women in America are certainly portrayed more and more in popular culture — but to what affect? As several articles have pointed out, the lesbian aesthetic may be in fashion magazines, but there's often an implicit separation between two women appearing intimate together for the camera, and two women intimate in real life.

At the very least, however, the Women's Studies handout is valuable due to this rather timeless piece of advice that can be applied across almost all social situations, really.

"Do not run screaming from the room. This is rude," the handout advises, adding "If you must back away, do so slowly and with discretion."