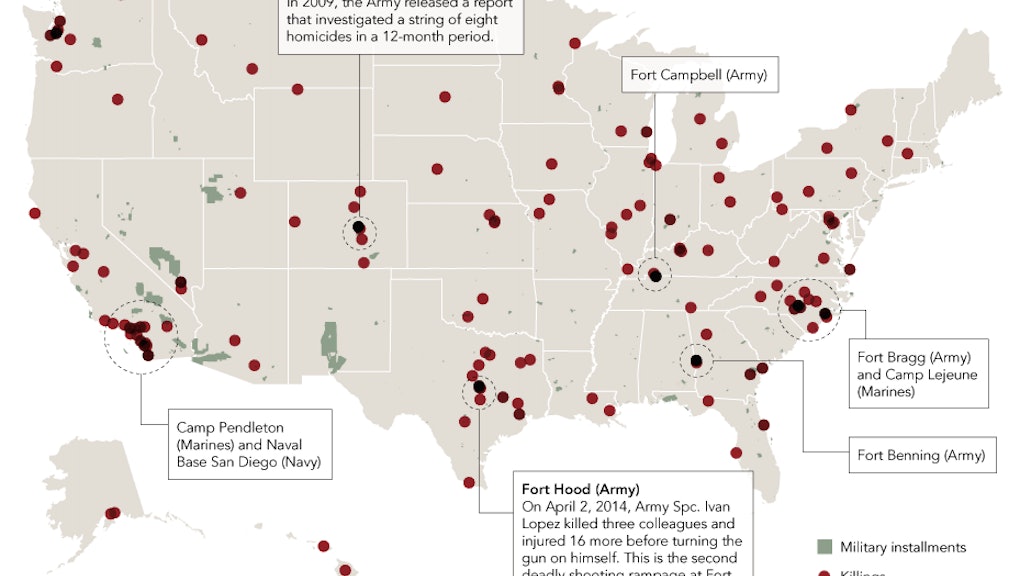 The Toll of Untreated Veteran PTSD, in One Devastating Graphic

Even as the American military engagement in Afghanistan comes to a close, the effects of war can still be felt at home. Returning veterans from Iraq and Afghanistan bring their battlefield traumas with them, and the dangers that untreated mental distress poses — on the veterans themselves, their loved ones and their community at large — are often overlooked.

Despite government attempts to increase the accessibility of PTSD screenings and education, many veterans struggle with mental disorders that have been caused or exacerbated in the line of duty. And as tragedies such as the Fort Hood shootings show, this lack of recourse can lead to devastating consequences.

A comprehensive and telling map from the Huffington Post illustrates 194 instances of killings carried out by Iraq and Afghanistan veterans and portrays the sobering reality: By letting down the very people who fought to preserve this country, we are putting them and those around them at risk.

The map also highlights other disturbing facts, such as the correlation between troop casualties and veteran violence, the concentration of killings around military bases, as well as the prevalence of veterans killing family members.

Government failure: The most frustrating aspect of this deadly trend is that it could be easily avoided with better treatment and care of veterans. The fact is that of the 2.6 million service members returning from Iraq and Afghanistan, nearly one in five are estimated to have symptoms of PTSD. But despite repeated recommendations for annual PTSD screenings, there is currently no such mandatory policy — letting veterans who suffer debilitating conditions to go undiagnosed.

According to a RAND study, "about 57% of those reporting a probable TBI (traumatic brain injury) had not been evaluated for a brain injury, only about half of troops screening positive for PTSD or major depression had sought help, and only half of those troops received 'minimally adequate care.'"

Right now, veterans who believe they suffer from PTSD can take — no joke — an online test to assess their symptoms. "Instead of screening troops through a face-to-face interview with a qualified mental health professional, the DOD relies on an ineffective system of paperwork to conduct mental health evaluations," concluded a study by the group Iraq and Afghanistan Veterans of America.

A change long overdue: It's important to keep in mind that veterans are not predisposed to violence, and that they are more likely to hurt themselves than hurt others. Still, the dark truth is that the very government that sends these troops to combat ends up putting the veterans and those around them in danger — and that's not a reality we can afford to ignore.