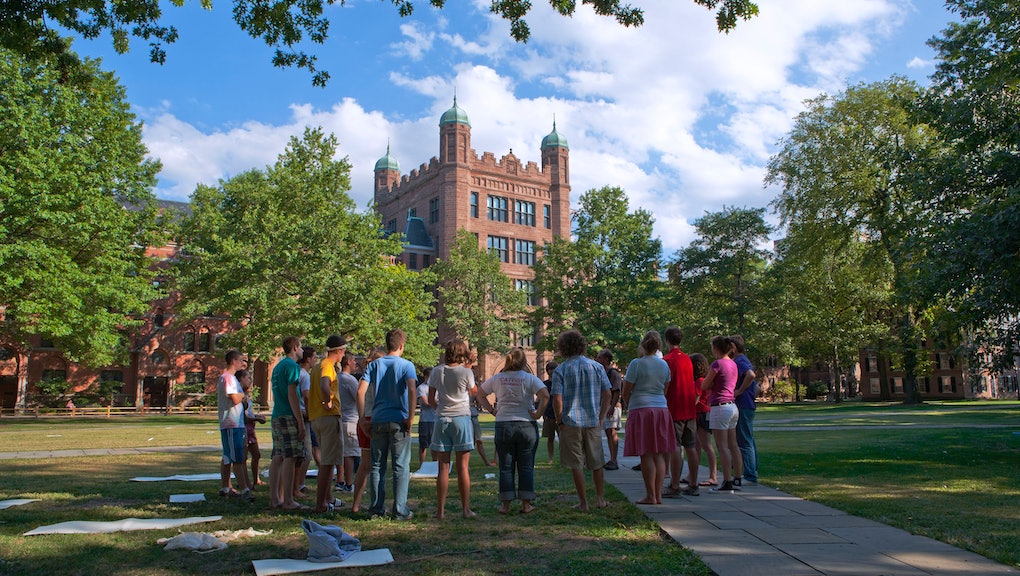 Getting Into Elite Colleges Is Harder Than Ever

The news: On April 1, colleges across the country notified high school students of their admissions decisions, and to many, it may have seemed like a cruel April Fools' joke. While one lucky student may have gotten into all eight Ivies, most students had a difficult time standing out in a pool of equally smart, talented, well-accomplished students. And it's no wonder that they did — elite schools in the U.S. had the most competitive year ever, as acceptance rates hit rock-bottom in a vicious, self-perpetuating cycle.

"Kids see that the admit rates are brutal and dropping, and it looks more like a crapshoot," said Bruce Poch, a former admissions dean at Pomona College in California. "So they send more apps, which forces the colleges to lower their admit rates, which spurs the kids next year to send even more apps."

If you were curious, these colleges have the lowest preliminary acceptance rates in the country right now:

Chicago's rate plummeted from a 40% acceptance rate just a decade ago.

Why is the college game getting harder? As Poch pointed out, students are applying to more schools than ever — but it's more complicated than that. Not only are students motivated to try their luck at as many schools as they can, but the Common Application system directly enables that. As more and more schools accept the standard Common App — 517 this year, up from 315 just seven years ago — applying to one additional college has become no more difficult than clicking a box.

And not only are American students competing with each other, but they also have to stand out in an increasingly international market. An Ivy degree is now "a consumer good," and well-off students from overseas are applying more and more to top U.S. colleges for their history and prestige.

But it's not as bad as you think: If these numbers are making you a bit queasy, don't panic. The preliminary acceptance rates are guaranteed to go up as students accepted to multiple schools make their final choice. Those who were on the waitlist will move up, also freeing up spots at the schools where they originally planned to attend.

And the fact is, the fear of rising college selectivity is mostly overblown. While acceptance rates may be dropping, you also have to account for the fact that more students — who are not all necessarily qualified — are applying than ever.

"The net effect of this behavior is to create an illusion of increased selectivity," wrote TIME's Dan Edmonds. "However, students who meet the academic and extracurricular thresholds to qualify for competitive schools will still get into a selective college; it's just less likely that they'll get into a specific competitive college."

So to all the prospective college applicants out there, don't get discouraged — you might not end up at your dream school, but your chances are as high as ever to end up at a college that is equally good. Besides, employers think an Ivy diploma is overrated anyways. Just keep doing what you're doing, cross your fingers and hope for the best.