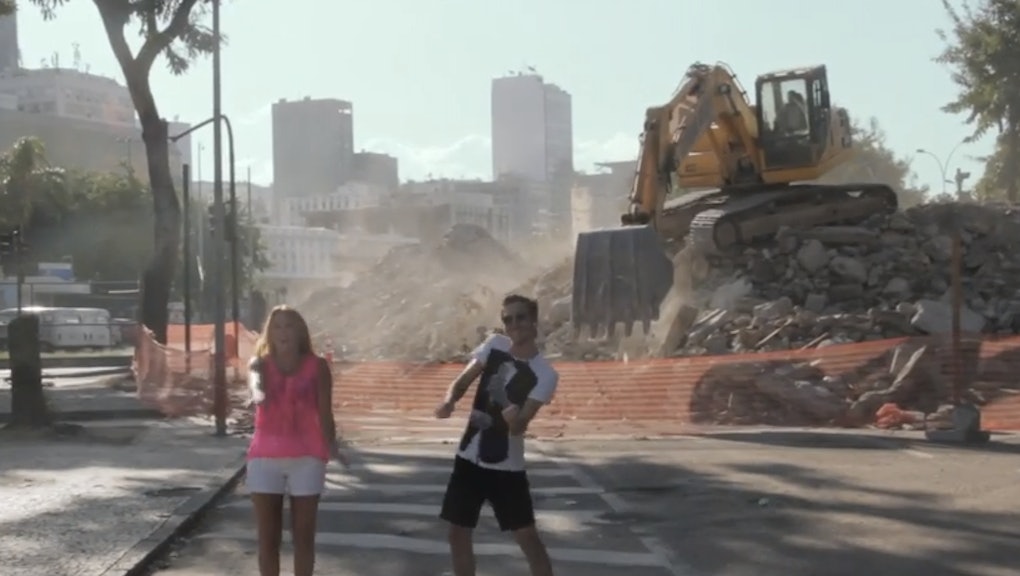 Brazilians Put a Unique Twist On the 'Happy' Craze, With This Parody Ahead of the World Cup

A quick search on YouTube shows how crazy the world is about Pharrell Williams' hit song "Happy."

Young people from around the world have uploaded videos of themselves happily dancing around their cities to the catchy song. That craze has also caught on in Brazil, but in a slightly different way.

Over the past few weeks, young people in several Brazilian cities have produced videos depicting the inconveniences of urban life to the ironically upbeat soundtrack of "Happy." The actors smile and dance through traffic jams, unfinished construction projects, piles of trash, crowded buses and muggings. The parodies' subtext is the litany of unfulfilled promises — including improvements to infrastructure, transportation and security — that have failed to materialize ahead of the upcoming World Cup.

(For those wondering about the naked guy tethered to a lamppost in the video, it’s a reference to an incident earlier this spring in Rio de Janeiro in which self-proclaimed vigilantes stripped a black teenager and, a la Breaking Bad, u-locked his neck to a pole in the middle of the sidewalk.)

In the southern city of Porto Alegre — which, coincidentally, translates to "happy harbor" — the creators of the "Porto (Un)Happy" video say, "Our protest is NOT against the Cup itself, but against the delays in its construction and the scant attention paid to the population." Their rendition of the song includes subtitles describing each of the unfinished construction sites the dancers visit, including start and expected finish dates. For the bulk of the projects, there is still no end in sight. The video also highlights graffiti and protest art with messages like "Cup for the rich, evictions for the poor."

Their frustration is understandable. As global anticipation for the World Cup has been building, Brazilians have been stuck with the bill — some $11 billion in public financing — and the traffic caused by never-ending construction. The urban poor face the threat of forced evictions, as well as serious shortcomings in the government's attempts to "pacify" Rio de Janeiro's favelas. Many are dismayed that while FIFA has relentlessly pressured the government to stay on schedule with stadium remodeling, the interests of everyday Brazilians lack such a powerful advocate.

The videos emerge as approval of the World Cup is at an all-time low. Currently, barely more than one-third of Brazilians (36%) believe the event will do the country more good than harm. That represents a stunning deterioration in support. In late 2008, some 80% of Brazilians were in favor of holding the World Cup in Brazil. Even just a year ago, public opinion was still evenly divided on whether the event would be a net positive.

But the parodies are as much a reflection of the country's fatigue with the World Cup as they are of protests that the event has generated. The massive demonstrations that rocked Brazil last summer were out of character for a country that usually laid-back. Polling trends indicate that the majority of Brazilians would prefer not to repeat the episode.

Back in July 2013, when over 1 million people poured into the streets demanding better services and governance, 80% of the population supported the protesters. Now, however, more than 60% of respondents believe that protests should not take place during the World Cup, due to the perception that the demonstrations have since been coopted by more hardline and violent groups. "(Un)Happy" represents a decidedly less confrontational form of protest. As the one of the video's producers says, "Our objective is to show our city's problems in a way that Brazilians enjoy, light-hearted and with humor, but without losing purpose."

It is still too soon to definitively characterize the World Cup as an unpopular waste of money. Its legacy depends on how smooth the tournament's roll-out ends up being, and, of course, how the Brazilian squad fares. Londoners were famously morose during the run-up to the 2012 Olympics due to concerns over cost and security. Yet in hindsight, 80% of Britons say the games were worth it.

If Brazil wins its sixth World Cup on home territory, the years of traffic jams and perpetual construction may be quickly forgotten. If not, well, even Pharrell may not be enough to cheer them up.