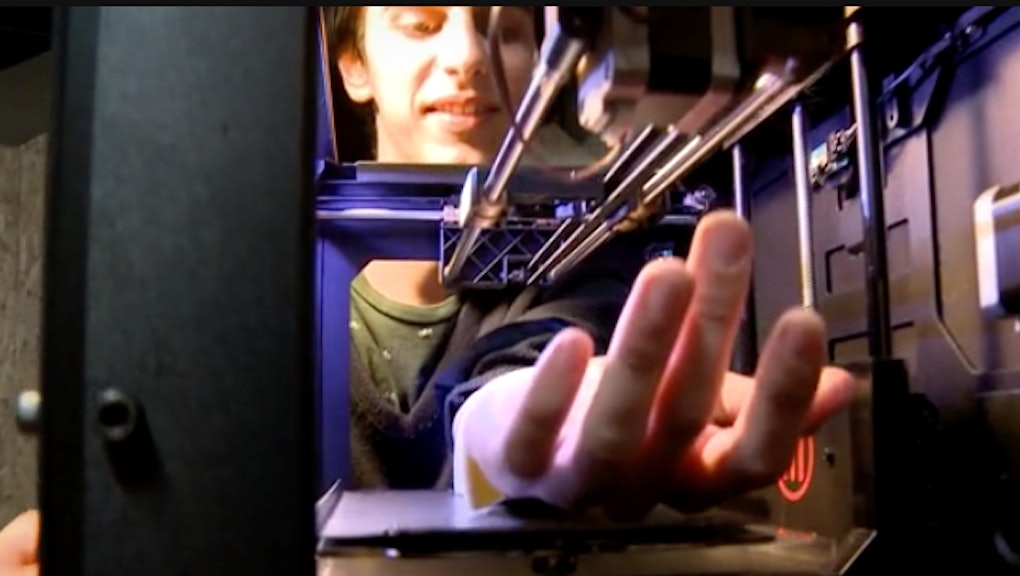 Thanks to 3-D Printing, Getting a Tattoo Will Never Be the Same

Three French students transformed a 3-D printer — a MarkerBot Replicator 3-D printer, to be exact, (price tag: less than $3,000) — into a tattoo machine. We can now officially add "gives tattoos" to the ever-growing list of things 3-D printers are capable of.

The three French design students' 3-D tattoo plan was motivated by a workshop hosted by ENSCI les Ateliers, a famous design school in Paris, which invited paricipants to spend one day (eight hours) transforming something in the public domain into another use entirely. While many of the participating teams came up with pretty similar ideas, this team opted to hack a 3-D printer into a tattoo artist. By the end of the eight allotted hours, they had figured out how to get a desktop 3-D printer to trace on skin, but they weren't done with the project and wanted to make these tattoos real. They kept working.

With a little more time, they got the 3-D printer to create a circle, first on fake skin and then eventually on a volunteer. And voila, the first 3-D printed tattoo was etched.

You can follow their process step-by-step at their Instructables site. In case you want to modify your own 3-D printer machine, it's as easy as: Replacing the 3-D printer’s extruder (what is normally used to squeeze or print with) with a tattoo gun, creating or acquiring a tattoo printing program, keeping the skin taut and finding a person who is ready to be tattood by a robot.

The 3-D printer is essentially the dreamer's Swiss Army Knife. What will be printed next? And will robots be the tattoo artists of the future? We'll have to wait and see.