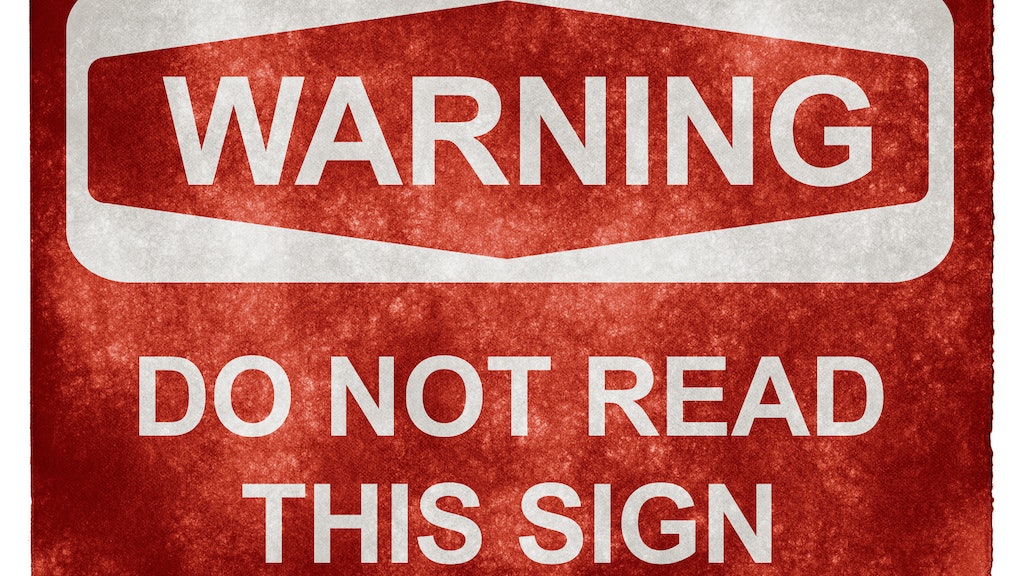 This is truly "the year of the trigger warning," as Slate foretold.

Trigger warnings are blurbs that appear at the top of articles, academic texts and, now, even tweets that are "designed to prevent people who have an extremely strong and damaging emotional response ... to certain subjects from encountering them unaware," according to Geek Feminist Wiki.

This pre-emptive feminist strategy has been widely debated in the blogosphere, even as it becomes increasingly prevalent online and in the classroom. Indeed, students from colleges across the nation — Oberlin College, Rutgers University, the University of Michigan and George Washington University, to name a few — have made formal requests through their student governments that literature be labeled to pre-empt any readerly distress.

A student a Rutgers, where I both taught and earned my Ph.D., wrote, "The examination of suicidal tendencies in Mrs. Dalloway may trigger painful memories for students suffering from self-harm." He then contended, "Reaching a compromise between protecting students and defending their civil liberties is imperative to fulfilling the educational potential of our university's undergraduates," attainable through trigger warnings, which would help students "immediately learn whether courses will discuss traumatic content."

The literature being targeted primarily deals with struggles related to race and gender. At Oberlin, for instance, students sought a trigger warning for Chinua Achebe's Things Fall Apart because it may "trigger readers who have experienced racism, colonialism, religious persecution, violence, suicide and more."

Students have sought out protections against unwanted harm and have asked for those "triggered" to be excused from class without penalty. But before we adopt this ad hoc, student-proposed solution, it's important to evaluate the use of trigger warnings in academia. There is something inherently controversial about categorizing, labeling and regulating impulses or emotional responses to a person's cultural experiences.

If education means encountering difference, thinking through one's set of beliefs and critically thinking about and parsing information is to arrive at a more informed, pronounced understanding than one had before.

As the student agenda spread, so did the controversy, with everyone from the New York Times to BuzzFeed weighing in. Bustle suggested the issue was that professors were too lazy. The point of the piece was that it takes "two seconds" to write a trigger warning and that we should be more "sensitive" to students' needs.

Every semester, I tell my students that my classroom is a "safe space" for — not against — discussion. I tell them they can say what they want with the language in their arsenal, but they should expect to be engaged by their peers and by myself. My classrooms are safe spaces not because we avoid talking about delicate matters, but because we have the freedom to discuss them.

As an adjunct with no job security, I also worry about the repercussions of an environment where students can appeal grades based on academic discomfort. Last year, I wrote about how a student appealed her grade and told my department chair that she felt like I was "shoving lesbianism down her throat" because we were reading Audre Lorde's Zami. She won her grade appeal, I was slapped on the wrist by the department chair and my teaching load was reduced by one course — which is substantial, since adjuncts are paid by the hour.

Ultimately, while the issue of trigger warnings is certainly not black and white, as a professor, there are several compelling arguments about why we need to rethink their prevalence in the world of academia. Here are nine of those reasons:

1. They make assumptions about the text and the reader.

Trigger warnings, in order to function as objective, cautionary labels, operate under a number of assumptions about the person consuming the text, as well as the text itself.

2. They can prevent dialogue in the classroom.

Trigger warnings provide what could be seen as a more politically correct excuse for sustained avoidance of what is presumed to be "triggering" or problematic. But there is no dialogue when a person refuses to engage with a text; said person can remain "safely" unchallenged.

"We may not have PTSD," Meghan Daum contends in the Los Angeles Times, "but consciously or not, we customize our information delivery systems so we mostly see, hear and read what won't upset us too much."

3. They misunderstand what it means to be triggered.

The basis of trigger warnings is actually a misunderstanding of how "triggering" occurs. Anything can trigger a person who suffers from a trauma or post-traumatic illness. Trigger warnings falsely focalize on presumed triggers without acknowledging that being triggered is profoundly subjective.

Jessica Valenti noted as much in the Nation: "[A]s someone who has had PTSD, I know that a triggering event can be so individual, so specific, that there is no anticipating it. Last year, a position in yoga class gave me a panic attack because it so closely resembled the position I was in when I had an emergency C-section.

4. They single out the emotions of the few.

"Trigger warnings are presented as a gesture of empathy, but the irony is they lead only to more solipsism, an over-preoccupation with one's own feelings — much to the detriment of society as a whole," Jenny Jarvie wrote for the New Republic.

"Structuring public life around the most fragile personal sensitivities will only restrict all of our horizons. Engaging with ideas involves risk, and slapping warnings on them only undermines the principle of intellectual exploration."

5. They rely heavily on generalizations.

In order to work and to have power, trigger warnings establish authority through objectivity, which means that they must universalize the experience of reading, thinking and feeling. This universalization presumes that every person responds the same exact way to a text, that individuality is negligible and that we are essentially flesh-machines.

The primary concern about trigger warnings on college campuses is that they curtail academic freedom by acting as a form of censorship, especially if teachers are prohibited from teaching certain texts or students are excused from reading assignments or class because of a potential trigger.

7. They can offer an easy out.

Coded as a protective measure, trigger warnings can actually serve an anti-intellectual agenda.

"Students should — and do — have the right to walk out of any classroom," Jill Filipic observed in the Guardian, "[b]ut students should also accept the challenge of exploring their own beliefs and responding to disagreement. Trigger warnings, of course, don't always shut down that kind of interrogation, but if feminist blogs are any example, they quickly become a way to short-circuit uncomfortable, unpopular or offensive arguments."

8. They are not proven to be effective.

"This is the truth of my trouble with trigger warnings: There is nothing words on the screen can do that has not already been done ... I don't know how to see beyond this belief to truly get why trigger warnings are necessary. When I see trigger warnings, I don't feel safe. I don't feel protected. Instead, I am surprised there are still people who believe in safety and protection despite overwhelming evidence to the contrary."

Or, as Lisa Hajjar says in the New York Times, "Any student can request some sort of individual accommodation, but to say we need some kind of one-size-fits-all approach is totally wrong."

9. They provide "safety" under the guise of surveillance.

Trigger warnings underpin the imagined "safe space" of the classroom. As a pro-trigger warning student said in the New York Times, these warnings would ideally eradicate a student's feeling of entrapment: "People suddenly feel a very real threat to their safety — even if it is perceived. They are stuck in a classroom where they can’t get out, or if they do try to leave, it is suddenly going to be very public."

Beyond the basic fact that in university settings students absolutely have the right to leave at any time, as an adult person, there is an irony underlying safe space: "Safe" for whom?

"Safe" here intimates surveillance, not freedom of dialogue, which negatively affects a professor's ability to teach without fear of censure or dismissal.