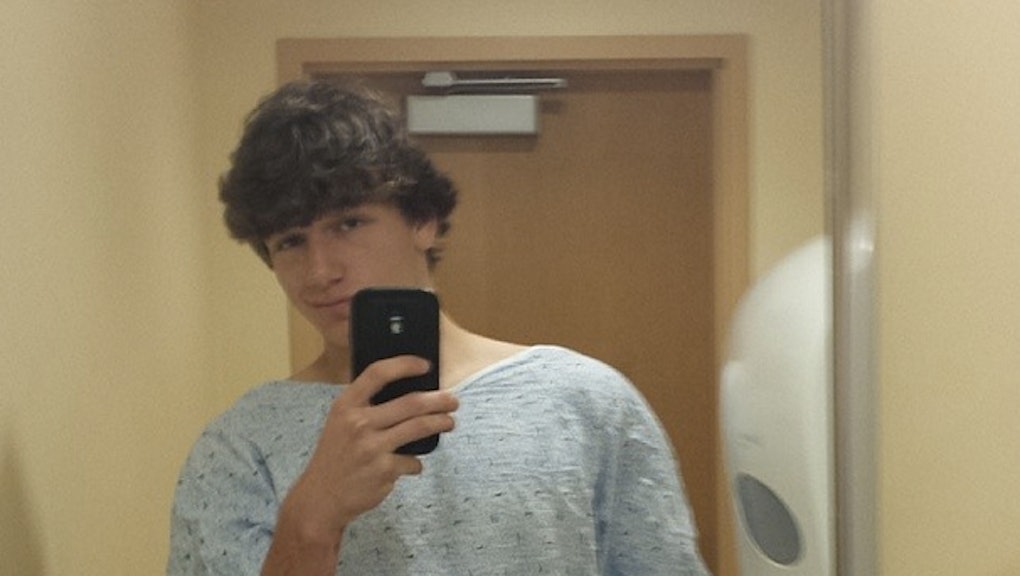 The motive remains unclear, but fortunately no one appears to have been killed in the assault. Witnesses say the stabber was tackled by assistant principal Sam King as well as senior Ian Griffith, who saw the suspect injure a school security guard. Many more could have been injured if not for the heroic actions of staff and students, including Nate Scimio, who alerted the entire school by activating the fire alarms after taking a wound to the arm defending two other students. Later in the day, Scimio posted this selfie from nearby Children's Hospital of Pittsburgh at UPMC:

Tragic as the whole incident is, that's a well-deserved victory shot. But even while he was still recovering from the awful events of the day, Scimio was being targeted for an interview by the media:

Griffith himself doesn't seem to have made it out of the school parking lot before being surrounded by reporters. (Come on, guys, let the kid go home.) Impressively, he's super humble about the whole ordeal:

Other heroes included junior Gracey Evans, who held pressure on the wound of a severely injured student for 10 minutes, perhaps saving his life.

"The pressure she applied probably played a significant role in his ability to survive this," said Mark Rubino, chief medical officer at Forbes Regional Hospital.

"None of these are superficial wounds. These all have significant stab wounds," said Forbes trauma surgeon Chris Kaufmann, whose institution treated eight of the most seriously wounded. "Patients who are stabbed in the abdomen and chest have, by definition, life-threatening injuries." One 17-year-old taken to UPMC Presbyterian received a single 4-centimeter stab wound that went straight through to his spine, missing his heart and aorta by mere millimeters.

As horrifying as Wednesday's incident was, the damage done could have been worse if not for the courageous and decisive actions of staff and students. Every person present at Franklin Regional Senior High School survived Wednesday thanks to their striking bravery.