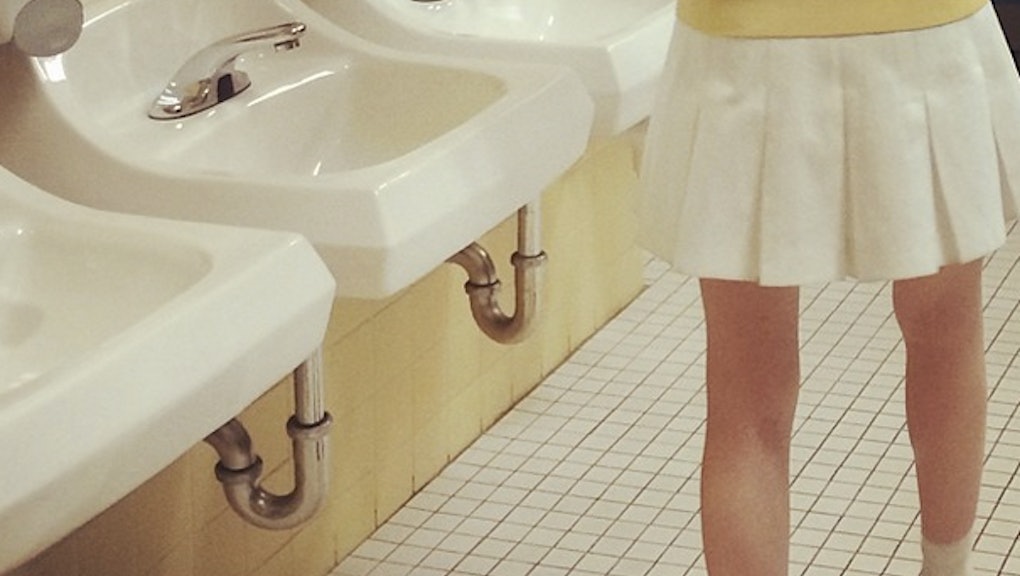 Largely thanks to this series, the 21-year-old, Toronto-born photographer is enjoying her moment in the sun. She has her first solo show, "Discharge," at New York's Capricious 88; she is the resident photographer for Tavi Gevinson's beloved online magazine Rookie; and she is being applauded by many young women for embracing the feminist label.

In a recent New York Times piece highlighting members of what the Times calls the "Tavi Generation" — young, feminist-identified women creating communities of self-empowerment — 18-year-old Gevinson was credited with helping launch Collins' career. Among the women featured, fashion writer Arabelle Sicardi was the only woman of color among them. Perhaps that is not surprising given the fact that mainstream feminism has become synonymous with white women, but it is still an unsettling reality as we look to define "who's who" among the next generation of artists.

Collins and Gevinson's work focuses on the path to womanhood, and they're both lauded as the feminist voices of our generation as a result. If the womanhood they depict is any indication, the future of feminism means continuing to erase women of color.

The many ways in which mainstream feminism has failed women of color is well documented, though one of the movement's most egregious and unforgivable mistakes is its failure to see that they exist at all.

Other women at the margins — trans women, queer women, and so on — also are often unacknowledged. When representations of queer individuals do make the subject of well-received work, they are overwhelmingly white. Nan Goldin, for example, who has been a celebrated artist for four decades, has been applauded for tenderly recording girls in various locations, women looking at themselves in mirrors and drag queens, but her images will leave you wondering if people of color — and women of color in particular — exist.

Diversity in the art world is a conversation we need to continue to have. It's no coincidence that in a world of thin models and artistic subjects, 42% of third grade girls want to be thinner. And it's no coincidence that Hollywood beauties like Lupita Nyong'o have suffered crises of identity and self-esteem based on the fact that the art and media landscape has historically underrepresented women who are anything but white and thin.

As activist Marian Wright Edelman said, "You can't be what you cannot see." Women have suffered these crises before, and our lack of diverse representation only perpetuates the problem. It should be our priority to spotlight diverse young artists who depict womenhood in its many forms.

The lack of representation emerges frequently and depressingly often in settings where young artists are being recognized. At this year's Whitney Biennial — an exhibition that showcases young and lesser known artists —  curators asked viewers to consider the art through the lens of the Obama era. Unfortunately, that did not seem to translate to the artists chosen: Only 9 of 103 were black. It's a figure that underscores the problem of representation as it relates to the artist.

Writer Eunsong Kim and artist Maya Isabella Mackrandilal wrote about the lack of people of color in the 2014 Whitney Biennial for the New Inquiry. They concluded, "The problem is structural, rooted in a long violent genealogy of gatekeeping." The most recognized names in feminism and among women artists are white women, and there's no reason to believe anything will change as the next generation comes of age. What Kim and Mackrandilal say to white curators also applies to these artistic feminist gatekeepers: "Diversity isn't more white women."

The current state of affairs is tragic for a lot of reasons, namely because there are so many women of color artists doing work that also speaks to the experience of womanhood without purporting to represent all women and without receiving the attention that the young women of Rookie or artists at the Biennial get.

One of these women is 28-year-old visual artist and activist Amaryllis DeJesus Moleski. Working with organizations like the Brown Boi Project and Strong Families, DeJesus Moleski's bright, bold digital work features masculine-of-center womyn, queer and trans people and people of color. She tenderly reflects various communities of color, depicting queer motherhood and families that include incarcerated loved ones. In the world according to DeJesus Moleski, women of color — and particularly queer women of color — are not footnotes. They are front and center.

Another undersung artist, Tatyana Fazlalizadeh, creates work about visibility in a very different way. The 28-year-old's series, Stop Telling Women to Smile, addresses gender-based street harassment. Her portraits, drawn from photographs and based on interviews with diverse women, provide responses to not only the street harassment they face daily, but also on the catcalls they receive. Examples include, "I am not your geisha china doll Asian fetish," and, "No me llamo mamacita chiquita preciosa cht cht."

In an essay penned by Collins she wrote, "Even if society tries to silence you, keep on going, keep moving forward, keep creating revolutionary work and keep this discourse alive."

Her words, even if not her images, ring true for people everywhere in the art world. This is magnificent advice, especially for women of color artists who must push to be seen and fight to have representations of their womanhood acknowledged as equally valid. Let's keep this discourse alive.