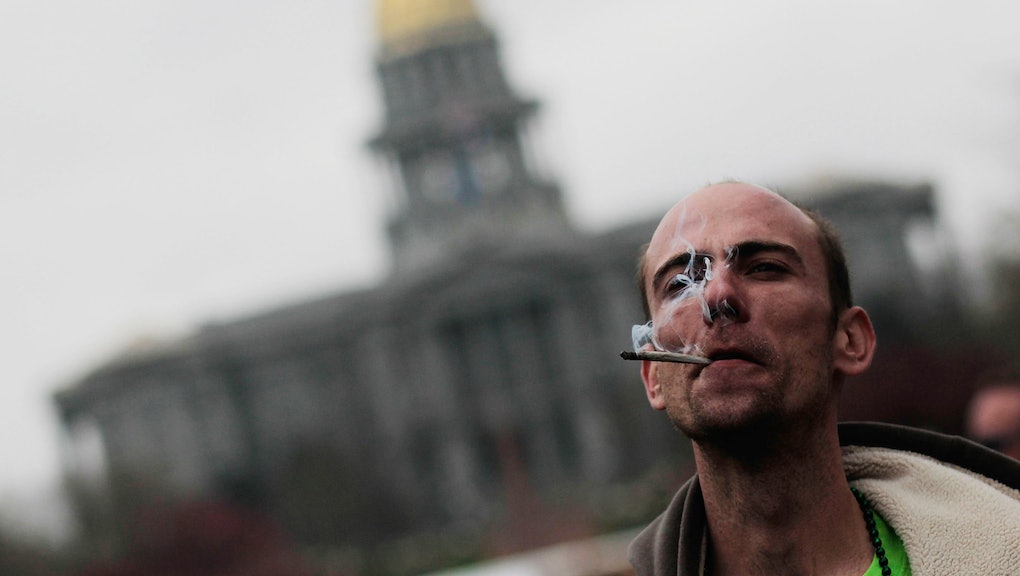 A Running List of All the Politicians Who Support Marijuana Legalization. So Far.

Three out of four people in the U.S. believe that marijuana legalization is inevitable, but you wouldn't know that listening to the political talk coming out of Washington, D.C. Despite the great economic success that Colorado has had (and Washington state is bound to have), there are virtually no other politicians in the country who have voiced clear support for full legalization of marijuana.

But as they say, baby steps. While politicians may be less willing to go whole hog when it comes to recreational marijuana, there are many more vocal proponents of legalizing pot for medical and compassionate uses. Others have spoken broadly about the need for drug policy reform and criminalized marijuana's devastating effect on the American criminal justice system.

Though we may be years away from full marijuana legalization across the country, more and more politicians are coming out of the marijuana closet to voice their incremental support. Here are 18 people from across the political spectrum who endorse decriminalization or legalization of marijuana to varying degrees.

"These [recreational marijuana users] are incredibly upstanding citizens: leaders in our community, and exceptional people. Increasingly, people are willing to share how they use it and not be ashamed of it. ... These laws just don't make sense anymore. It's time for politicians to come out of the closet on this." - the New York Times

"We have police officers … arresting people for 10 grams, 11 grams, 12 grams. A huge amount of time dedicated to that. Then, they go to court. That means they're not on the street fighting gangs, fighting gun violence. ... This is a healthy discussion to have because we're making a change. I think it's a smart change because I want our police officers focused on serious violent crime." - on Chicago's decriminalization of small amounts of marijuana, the Chicago Sun-Times

"You know, I held my father's hand while he died of cancer, and it's really painful when you do something like that up close and personal. ... And it puts me in a position of saying, if there's something a physician can prescribe that can help someone who's suffering, I'm in favor of that. Now, I want to make sure they've got the right restrictions. It should be like any other prescription drug. That there's careful control over it. But I think it's really hard to watch somebody suffer that you love." - Boston's WTKK-FM

"I think that most small amounts of marijuana have been decriminalized in some places, and should be. We really need a reexamination of our entire policy on imprisonment." - Rolling Stone

"I am optimistic that we will reach a day when America has the smart, sensible marijuana policy that we deserve. ... We are at a tipping point, on the unprecedented cusp of legalization. The progress at the state level has led the way, but it won't come nationally until it happens in a critical mass of states. Then there comes much more pressure on Congress to legalize and regulate at the national level. Our streets will be safer and our economy stronger." - speech at NORML conference

"Medical marijuana — heck yes. I do not understand, that there are drugs more toxic, more dangerous, more challenging, in drug stores all over my city and all over my state, but yet we single out this one drug and say you can't even have it in a medical fashion. The reason why I said I want to go beyond that is because of the drug war. ... We have seen so much of our national treasure being spent in the drug war." - the Huffington Post

"I support the action taken by the state legislature. It's wrong to have so many people behind bars for the use of marijuana. ... There is a growing recognition in both parties that a system that locks upof millions of nonviolent offenders is counterproductive." - on Maryland's decision to decriminalize small amounts of marijuana, Politico

"What I can do as the governor of the second-largest state in the nation is to implement policies that start us toward a decriminalization and keeps people from going to prison and destroying their lives, and that's what we've done over the last decade." - speech at World Economic Forum

"Middle-class kids don't get locked up for smoking pot, and poor kids do. ... We should not be locking up kids or individual users for long stretches of jail time when some of the folks who are writing those laws have probably done the same thing. It's important for [the legalization of marijuana in Colorado and Washington] to go forward because it's important for society not to have a situation in which a large portion of people have at one time or another broken the law and only a select few get punished." - the New Yorker

"If you'd asked me this question a dozen years ago, it would have been easy to answer — I would have said no, because [marijuana] leads to other stuff. But I can't say that anymore. ... I think we need to take a real close look at this. I think that there's some medical reasons for marijuana. ... I guarantee you one thing. We waste a lot of time and law enforcement going after these guys that are smoking marijuana." - Las Vegas Sun

"We know that marijuana can provide relief for patients suffering from serious illnesses. I applaud Rhode Island's effort to make it available for that purpose." - on Rhode Island's decision to decriminalize marijuana, GoLocalProv

"The people of California have made it legal for patients to have safe access to medicinal marijuana, and as a result thousands of small business owners have invested millions of dollars in building their companies, creating jobs and paying their taxes. We should be protecting and implementing the will of voters, not undermining our democracy by prosecuting small business owners who pay taxes and comply with the laws of their states in providing medicine to patients in need." - U.S. News & World Report

"Maybe we should legalize. We're certainly moving that way as far as marijuana is concerned. I respect the will of the people." - Talking Points Memo

"Over the years, I've been moved by the brave patients and veterans who are fighting terrible illnesses. They need and deserve pain relief. This new law will provide that relief and help eligible patients ease their suffering, while making sure Illinois has the nation's strictest safeguards to prevent abuse." - on Illinois' decision to legalize compassionate use of marijuana, press release

"Allowing doctors to provide relief to patients through the use of appropriately regulated and dispensed medical marijuana is the compassionate and right policy for the State of New Hampshire, and this legislation ensures that we approach this policy in the right way with measures to prevent abuse." - On New Hampshire's decision to legalize medical marijuana, press release

"Final approval of this legislation accepts the reality that the current law does more harm than good — both in the impact it has on people's lives and the burden it places on police, prosecutors and probation officers of the criminal justice system. ... There is no question that the state's criminal justice resources could be more effectively utilized for convicting, incarcerating and supervising violent and more serious offenders." - on Connecticut's decision to decriminalize small amounts of marijuana, press release

"Marijuana decriminalization is an issue that will undoubtedly become more prevalent over time. ... The U.S. already has the highest incarceration rate in the world. We lock up the majority of inmates for nonviolent drug-related crimes. Instead of attacking the consumers, we should give them alternatives to poverty and street life, to steer them away from drug abuse in the first place. It simply doesn't make sense to waste billions of dollars putting hundreds of thousands of Americans in prison for nonviolent offenses of the law." - Politico

"I actually think that having marijuana as a Schedule 1 drug is the height of silliness. Meth is a Schedule 2 drug. I mean, this just makes no sense. It's nuts. I've also always supported allowing marijuana to be used medically … in a prescribed way." - the Olympian