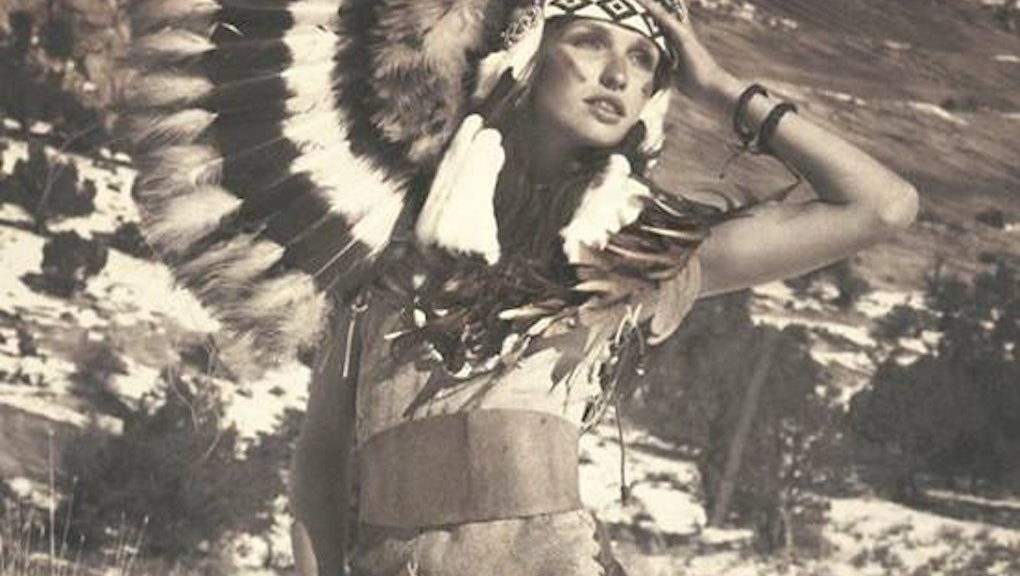 Back in January, designer Walter Van Beirendonck sent a model down the runway wearing a comically large headdress with the words "stop racism" scrawled across it. It was a potent and powerful message, a message that apparently Heidi Klum didn't get. In a continuation of fashion's backward practice of cultural appropriation, Klum had contestants on Germany's Next Top Model travel to Utah and pose as sexy indigenous people. What?

In this latest iteration of fashion's ongoing cultural faux pas, the models posed in headdresses, blankets and face paint, some holding peace pipes and spears. The photos were later shared in a photo set on Facebook and described, in a supreme case of tone-deafness, as "Endlose Weite und einsame Wildnis – meine Girls beim Shooting in Utah" ("Endless length and lonely wilderness - my girls during the shoot in Utah"). Think Progress deservedly put the media microscope on the images yesterday.

Unfortunately, the sight of models in "red face" is a frequent occurrence. From headdresses on Victoria's Secret runways to the recalled "hipster headdresses" at H&M, the fashion industry somehow hasn't caught on to the fact that this is downright offensive cultural appropriation, no matter how often and how impassioned the online masses call them on it.

Indigenous people have long been stereotyped as serene and romantic token images, a practice obviously still perpetuated in fashion and pop culture and brought frequently to dreamy photo shoots. Even as Native, activist and feminist voices consistently explain why it's wrong the internet continues to be forced into a position of ethical counterweight as big fashion business repeatedly opts for appropriation.

The outcry against Klum's latest has been uniform and entirely legitimate. Writing at Last Real Indians, Ruth Hopkins, a self-proclaimed fan of Heidi Klum’s show Project Runway since episode one, summed up the both the broad Native response to the shoot:

"As a Native woman, I’m tired of being bombarded with negative, false imagery of who society thinks I am. For once I’d like to enjoy a fashion show, a music video, a football game or a photo spread without being singled out because of my race. It’s not just offensive, it’s discriminatory and just plain rude."

So far, two weeks since sharing these photos, Klum has not issued any apology or statement.

It's high time the fashion world opened their eyes, put away the offensive regalia and listened to the masses. We're right.