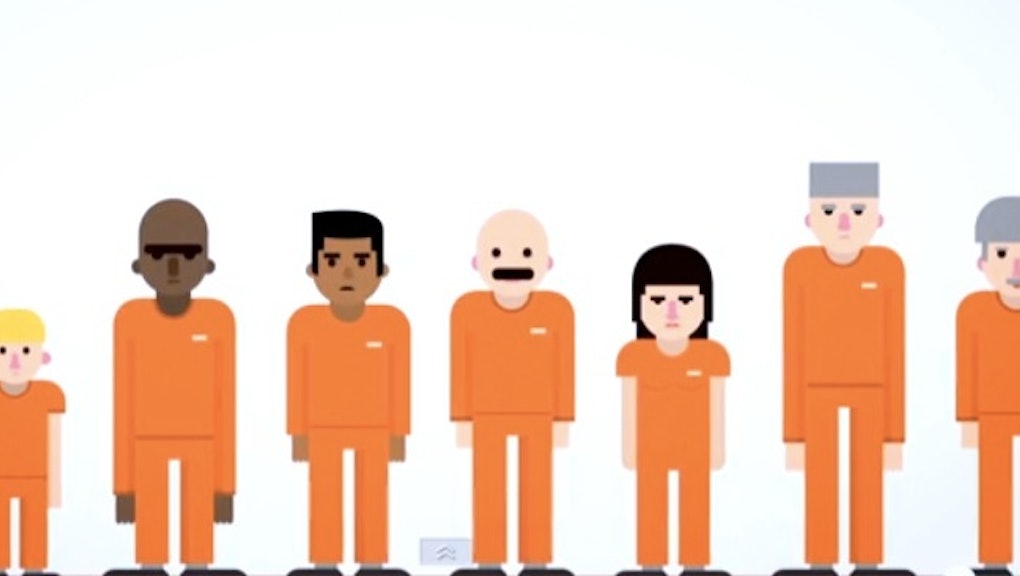 The United States accounts for 5% of the world's population but 25% of the world's prisoners. The total incarcerated population in the so-called "land of the free" is a staggering 2.4 million, representing a 500% increase over the past 30 years. The statistics are pervasive: 1 in every 108 adults was in prison or jail in 2012, and 1 in 28 American children has a parent behind bars.

Brothers Hank and John Green are famous for vlogging, YA novels and the Crash Course series, which explains everything from biology to literature to psychology with compelling animations. Hank Green made the following video with The Prison Policy Initiative and visual content designers Visual.ly to educate fans and viewers about a system from which, Hank admits, privilege has kept him shielded.

This short animation video touches on everything from the U.S. legal system to how international law considers solitary confinement, a common American practice, to be torture. "America's 40-year policy of mass incarceration is deeply unethical, not very effective and promotes the security of the few at the expense of the many," Hank writes in the video's description.

Video Credit: Hank and John Green produced this video with the help of Visual.ly, Kurzgesagt and The Prison Policy Initiative. The full transcript is available here.

- The U.S. has the highest incarceration rate in the world.

- Children as young as 13 years old have been sentenced to die in prison.

- Less than 25% of crime reduction can be attributed to incarceration.

- Mass incarceration is a $75 billion per year "failed experiment."

- There are more people behind bars today for a drug offense than there were in 1980 for all offenses combined.

- 3 out of 4 young black men in Washington, D.C., can expect to serve time behind bars.

- African-Americans comprised 12% of regular drug users, but almost 40% of those arrested for drug offenses.

- 80% of defendants cannot afford a lawyer. Tens of thousands of people go to jail every year without ever talking to a lawyer or going to trial, and a public defender will routinely have a caseload of more than 100 clients at a time.

READ: "NYPD Commissioner-Turned-Felon Has a Message For Us Now That He's Been to Prison"