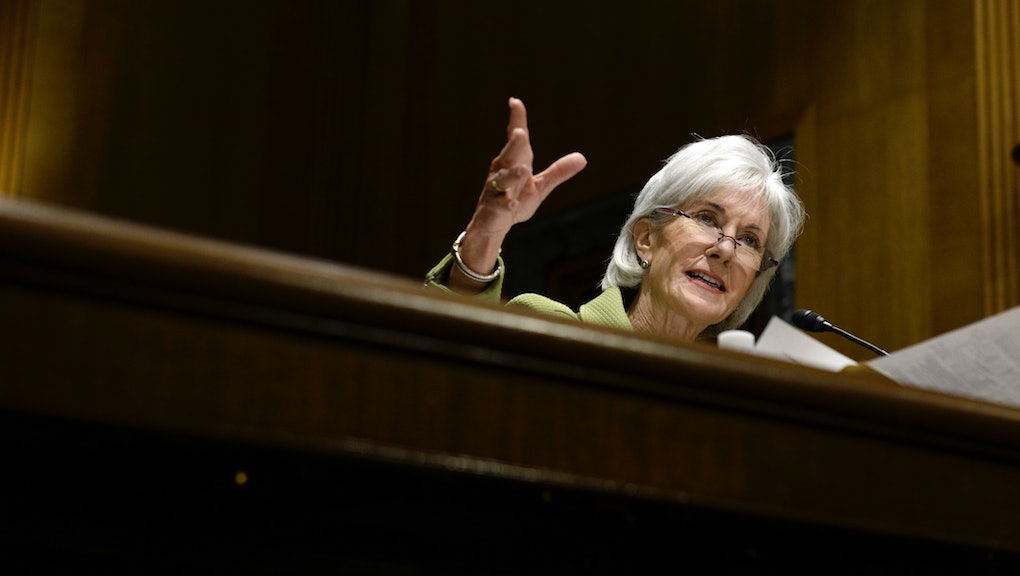 After a Botched Obamacare Rollout, One of Obama's Top Aides Resigns

lEmbattled Health and Human Services Secretary Kathleen Sebelius has apparently hit the road, according to reports from Washington which indicate that the 65-year-old White House official in charge of implementing the Affordable Care Act has resigned effective immediately.

President Obama will accept the resignation later this week, while her replacement will be director of the Office of Management and Budget Sylvia Mathews Burwell. Sebelius' exit will close the chapter on a disastrous first year for Obamacare, specifically obvious and overwhelming technical difficulties on the Healthcare.gov site Americans were relying upon to purchase insurance coverage to comply with the law's mandate. You know, technical difficulties like crashing for days on end and not letting anyone actually purchase insurance.

While the problems were complex and not the fault of any one person, Sebelius took the brunt of the criticism for what is now well-known as one of the worst screw-ups in major federal program history. Fox News critic Judge Napolitano claimed after hearing the news that "She has symbolized, she has personified the catastrophic disaster that ObamaCare has been both substantively and procedurally in its rollout."

But while Sebelius definitely dropped the ball, the timing of her resignation is more than a little puzzling. Why quit now, when Healthcare.gov's problems seem more like a bad hangover than anything else? Headlines have largely been about the unexpectedly large number of signups than anything else — 7.5 million, 400,000 more than when the Obama administration surpassed its April 1 target for enrollments. No one's disputing the Healthcare.gov rollout was a total disaster, but the viciously sought-after resignation of Sebelius at a time when the president's critics seemed to have lost this particular battle threatens to re-ignite the controversy. Maybe Sebelius was tired of the relentless combination of character assassinations and valid criticism and was waiting for the first available opportunity to back out. In that scenario, it's possible the president's desire to keep the hounds at bay have kept her on the job longer than she desired. Or alternately, maybe the administration has agreed it's been just long enough that her removal will only excite the right-wing talk circuit.

And of course Republicans are reacting with thinly-veiled glee.

But with 7.5 million sign-ups, we'll have to wait and see if the American public cares very much about a cabinet official's resignation or more about the pros and cons of their newly-obtained insurance.

In any case, Burwell has a long and tedious job ahead of her managing the growing state and federal exchanges, which hopefully will have a smoother ride in the future.