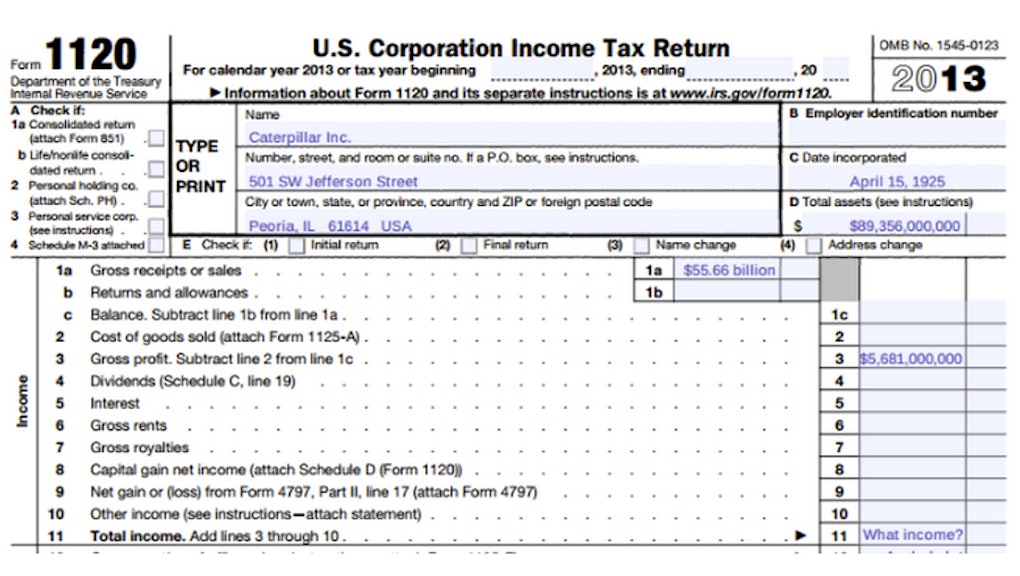 While You Give a Third of Your Income to Taxes, Here's What Corporations Get to Pay

At long last, tax season has arrived! While most Americans dread having to get their records in order and input numerous fields only to be capped by brief euphoria or anger (depending on whether we get any money back), for many corporations, it's a much different experience. For some of them, it's like Christmas.

Many corporations have lower effective tax rates than individuals. While corporate profits have soared, Americans' incomes have staggered and yet we're the ones carrying the tax burden. Not only do many U.S. companies keep their overseas profits in foreign countries, about $2.1 trillion in all, double what it was in 2008, they also spend tens of millions of dollars on lawyers and auditors who help identify possible loopholes. We're overdue for a tax overhaul that is both unjust and overly complex.

Let's look at one egregious example from this week's Senate Finance Committee hearings.

Caterpillar Inc. (CAT) is accused of dodging $2.4 billion in U.S. corporate taxes by "giving" $8 billion in profits to its Swiss subsidiary, thus avoiding U.S. corporate taxes altogether. Senate investigators allege that Caterpillar — based in Peoria, Illinois and the world's largest construction equipment maker — struck a deal with the Swiss government to pay as little as 4% tax on the billions in question. Call it whatever you like — tax avoidance, tax fraud or "strategic tax evasion," but it's a disservice to the American taxpayers who subsidize Caterpillar to the tune of hundreds of millions of dollars.

Caterpillar is ranked #42 on the Fortune 500, employs over 125,000 people, and rakes in $65.88 billion in revenue annually. However, if CAT had to fill out a tax return form, it would look more like that of a welfare recipient than a multinational corporation with assets valued at over $89 billion:

The last 15 years have seen a curious shift in Caterpillar Inc.'s finances. Today, 70% of Caterpillar's manufacturing and distribution operations are U.S.-based, but only 15% of its profits are booked stateside. In 1999, a whopping 85% of its earnings were logged in the United States, a difference of 70% in only 15 years. The Senate Subcommittee's report details how Caterpillar paid PricewaterhouseCooper's (a large tax advisory firm) $55 million in late 1999 to enact a "Swiss strategy" to shift their tax burden to Switzerland, where corporate tax rates are notoriously low (allegedly 4% to 6% in this case).

Sketchiness doesn't stop here. In the U.S., Caterpillar employs 4,900 workers while administering 54 manufacturing facilities and 10 massive warehouses stateside. By contrast, Caterpillar's Swiss subsidiary employs a mere 65 people and has no factories or warehouses. It becomes clear that the company's Swiss division exists largely, if not entirely, to take advantage of favorable tax rates on profits earned elsewhere. This is despite CAT only paying annual U.S. taxes of $600 million while profiting to the tune of $5.68 billion each year. That makes for a startling low tax-to-profit ratio of 9.47%, even when minding the loopholes exploited by other big multinationals.

I am not surprised that Caterpillar has been outspoken in lobbying Congress to end corporate income taxes on all profits earned overseas. Multinational corporations wouldn't need to spend money exploiting tax code loopholes when they can simply pocket their profits. For all it cares, CAT can say "screw you" on the company's tax return and Congress would still find a way to lick its boot.

In 2009, a Caterpillar employee (one Daniel Schlicksup) went public with allegations that the company improperly directed $5.6 billion in component sales to its Geneva division. Schlicksup said that CAT then used a "Bermuda structure" to move the funds back into its U.S. coffers. This move alone avoided $2 billion in U.S. taxes. Routing billions of dollars to a notorious tax haven in Switzerland and re-routing the money back to the U.S. through another notorious tax haven in the Caribbean is almost too by-the-books.

Caterpillar is far from the only large American corporation evading taxes. The U.S. tax code allows companies to defer tax payments on overseas income indefinitely as long as the money isn't brought home. The record $2.1 trillion held in untaxed profits overseas is not invested in anything; it's sitting in foreign accounts waiting for a policy loophole to exploit.

President Obama and Senate Republicans have sung the praises of CAT's practices for years. In 2009, Obama proclaimed that, "You can measure America's bottom line by looking at Caterpillar's bottom line" and "Caterpillar has shaped the American landscape, shown the world what a great American company looks like." Even in the wake of this scandal, Republicans have been rushing to defend Caterpillar's deeds, arguing that it is in the interest of Caterpillar's shareholders to avoid paying U.S. corporate taxes, and that their methods are "completely legal." Our representatives congratulated a company that undermines the solvency of "we the people" in the name of return on investment for an elite few? Really?

Caterpillar Inc.'s annual rate of return to investors was 17.4% between 2002 and 2012. It has a great return on investment because it exploits the U.S. tax code and screws American taxpayers. American families and small businesses don't have platoons of tax lawyers and financial analysts to facilitate foreign tax trickery. Why does a company that successfully lobbied the federal government's export-import bank last December for a loan of $694 million get to skip paying its taxes?

In any case, Caterpillar is in the hot seat right now. This development could lead to some meaningful tax reform, ideally more significant than simply eliminating those much-ballyhooed tax code "loopholes," although it's not a bad place to start.

Anyhow, the Tax Man cometh! May it come for us all, equally.