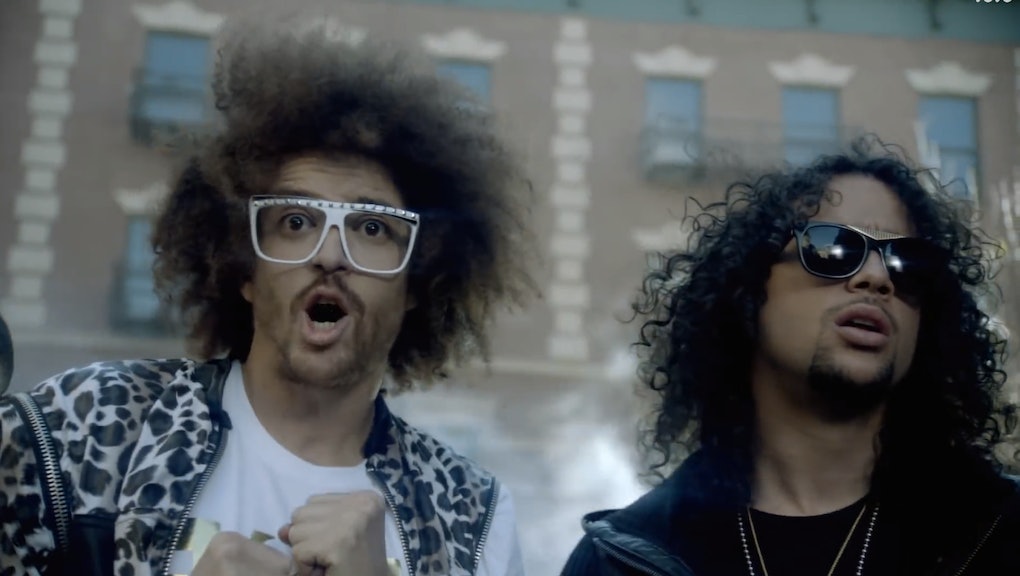 The Defining Pop Anthem for Every Year of Your 20s

Chances are good that you'll make the best — and worst — decisions of your life in your 20s. You'll experience frequent epiphanies about who you are and what you want, and, equally important, who you're not and what you don't want.

Slowly, you'll actually figure those things out. You'll learn and grow more than you ever thought possible, and by the time 30 rolls around, your teen years will seem eons away. Believe it or not, you'll look back fondly on being 21, even though you'll never really want to be 21 again.

With that in mind, here is an uneven, confusing and ultimately redemptive playlist of pop anthems for what will surely turn out to be the weirdest decade of your life:

Your teen years are finally behind you, and you've started telling your friends that you "feel so old," much to the annoyance of elder friends and family members.

But you're 20! You're in college and your major (and ambition in life) is still undeclared, and that's OK for now. You've already started to lose touch with some of your closest friends from high school, which itself feels light years in the past.

You and your friends have another year before you can legally imbibe. That means border runs to Canada (if you live anywhere near the border), or otherwise leaning heavily on your 21+ friends and acquaintances, or your friend's 21+ acquaintances, or friends of your friend's 21+ connections. You get your fix one way or another. And when you can't, you play this song and bask in the warm glow of youth while you still can.

You're realizing college is slipping away, and you should be studying less and making the most of what everyone tells you are the "best years of your life." They're wrong, but you don't know that yet. You'll look back in six or seven years and cringe because you think you have it all figured out.

But you're legal! As a result, you and each of your closest friends have been forcibly ejected from at least one bar in a five-mile radius of your school. You subsist on cheap beer, pizza and undercooked pasta. It's glorious, until it's not. But while it's happening, you're completely unapologetic.

Similarly, in 10 years, you won't be able to believe that you once paid good money for music by a band called "LMFAO." None of us will.

You finally declared a major but haven't yet decided "what you want to do with it" when you graduate. 99.9% of students feel the same way.

There have been a lot of changes. Your friends from freshman year are mostly gone. Your savings are gone too. Your passionate senior year love affair that was your last chance to find true love in college? Also gone. Suddenly Gotye's anthem of alienation begins to make sense.

Most of us have a thrilling, unhealthy and altogether exhausting love affair in our 20s. You're no exception. In between drowning your sorrows with beverages not even Hemingway could stomach (hello, Rubinoff), you're reflecting on what you usually seek out in a lover and what you need. They're not the same thing, and you know that now.

You survived and graduated college, but are unsure of what to do next. You're "self-sufficient," but not quite. You work part-time and are still mulling over whether or not to apply to grad school, which seems pretty unappealing all of a sudden. Maybe take a gap year and travel? You look at your friend's photos from Thailand and it looks fun, but also kind of pointless at the same time.

You dance to "Blurred Lines" when you go out, even though you once argued it was a "rape anthem" (now you're not so sure). Regardless of your lingering uncertainty on the matter, you know three things for sure: one, Robin Thicke is a douche. Two, there's no use trying to deny that beat. Three, life is currently confusing.

You're officially in your mid-20s, and it's freaking you out a little. You're finding out that the older you get, the more difficult it becomes to make new friends, so you stick tight with the old college crowd.

Now that it's time to start living "sustainably," you realize you're broke. But like, seriously broke. Worse than college. You spent what little you had left on a three-month trip to Southeast Asia, or South America, or a roadtrip with your friends to South Carolina — wherever you went, the money's gone. All of a sudden the Goodwill down the street doesn't seem so shady.

You go to the thrift shop. But there are no alligator shoes to be found. Even Macklemore has led you astray.

You've settled into one city for long enough to have tossed your dating hat back in the ring. You start telling people that "you've found someone" ... someone who's "different." Your friends and family, remembering your senior year disaster, pray you're right.

The job situation is looking up too, as your parents, old professors and the president say that next year the economy will turn around, and there will be more and better jobs. Good news, because the interest on your student loan debt keeps piling up. And now that you've come around to the wonders of adult dating (there are some), you're feeling pretty ecstatic and optimistic about life. Beyoncé gets it. You may not be married to Jay-Z, but you can relate.

Your 20s are half over, and 30 suddenly seems like a very real and frightening possibility. You thought you had it figured out, but you don't. You freak out.

You've started going out more. You reconnected with friends from college who are still single. Others have started getting married and spawning offspring, which still feels a long way away for you. You've been part of a wedding party, which was cool, because you got to sit at the fancy table and dress up, but also not cool, because Grandma has started asking you about a wedding of your own. And grandchildren.

But you don't want any of that, at least not right now. Is that normal? Is there something wrong with you for not wanting that? You dig out your old Gnarls Barkley CD just to hear this song. Then you realize your computer doesn't have a CD drive.

"It's better to burn out than to fade away," Neil Young once sang. You're not so sure anymore. You used to romanticize the so-called "27 Club," but you don't anymore. Jimi Hendrix, Amy Winehouse, Kurt Cobain… Life gets better the older you get. Right?

You hope so, because at 27 you are officially in the thick of things, and life still beats the hell out of you once in a while. The one who you thought was so "different" turns out to be... and not in a good way. Your hours are down at work. You feel a bit isolated from the old college gang because it seems like everyone but you is either moving out of town, pregnant or getting married.

You're really getting tough, though. Even when it feels like you can't hold on, you hold on. You feel like a bit of a badass because of it. You've got soul but you're not a soldier. You're starting to loosen up.

As a pleasant consequence, you have a little extra money to fool around with. You're generous with friends and family members — a little too generous. In the morning you shake your head when you remember buying not one, not two but three rounds of drinks for you and all your friends at the bar the night before.

You still remember what it was like to be broke a few years ago, and your pleasant new circumstances feel like a brilliant stroke of luck. Kind of like Pharrell being a part of "Blurred Lines," "Happy" and "Get Lucky" in the same year. But is it sustainable?

20 seems like a lifetime ago, and you're a shadow of your former self — in a good way. What was good about you at 20 has remained and turned into greatness. Not only that, you've managed to shed a lot of your worst habits.

30 still scares the hell out of you, but you're optimistic about the next decade. You look back on the one that's just passed and can hardly believe it. You've started untagging an extensive series of pictures from your younger years for the sake of ego, as well as future employment prospects. You're scared, but you feel ready for whatever's to come.