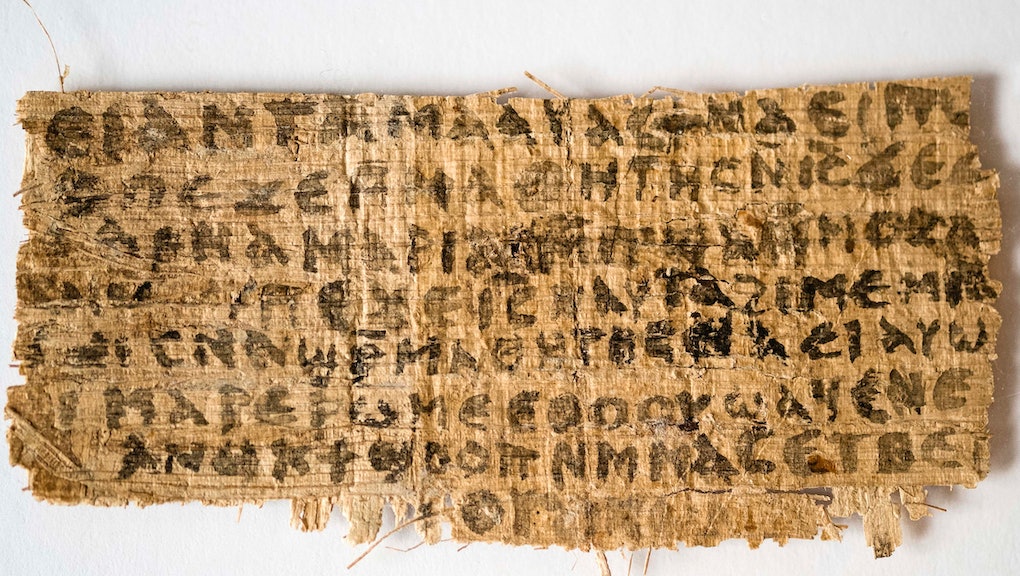 The news: A tiny, business card-sized piece of papyrus has started a firestorm in the archaeological and the theological communities, all with few words of suggestion that Jesus may have been married.

Dubbed "The Gospel of Jesus' Wife," the papyrus was first unveiled in 2012 by Karen L. King, a historian at Harvard Divinity School. Almost immediately, she was assailed with claims that the artifact was poor forgery, and a team of researchers from Harvard, MIT, Princeton, Columbia and Australia's Macquarie University have been working since then to assess the authenticity of the papyrus, the ink, the writing style and the calligraphy. On Thursday, they finally published their conclusion: The papyrus is "an ancient document, dating between the sixth to ninth centuries CE."

"The main thing was to see, did somebody doctor this up?" said Timothy M. Swager, a chemistry professor at MIT who examined the ink. "And there is absolutely no evidence for that. It would have been extremely difficult, if not impossible."

The background: The papyrus fragment contains the phrase, "Jesus said to them, 'My wife...'" There is also reference to a Mary, and the idea that "she will be able to be my disciple."

Does this mean Jesus was actually married? Not at all. The Harvard study merely focused on the authenticity of the piece of papyrus itself and not on the content — just because the document is ancient does not mean that it is telling a true story. There is also the possible interpretation that Jesus may have been speaking metaphorically. Throughout the New Testament, the church is referred to as "the bride of Christ," meaning that the phrase "my wife" could have been an innocuous reference to Jesus' followers.

King has maintained from the very beginning that the papyrus is significant not because Jesus may have had a literal wife, but due to its discussion of women as disciples.

"The main topic of the fragment is to affirm that women who are mothers and wives can be disciples of Jesus — a topic that was hotly debated in early Christianity as celibate virginity increasingly became highly valued," she said in a press release.

The controversy continues: It's unlikely that the Harvard study will put the claims of forgery completely to test. Harvard Divinity School is to publish a dissenting opinion by Brown professor Leo Depuydt, who believes that the document's grammar is too poor to be real. It will also be interesting to see how the Vatican responds, considering how it vehemently denied the papyrus' authenticity back in 2012.

But for King, all of the religious uproar is taking attention away from the historical discovery.

"I think with regard to religion, it's always incredibly important that people take a critical and a constructive point of view to their belief and practice," King told the Atlantic. "Good historical information can be a good resource for people to do that well. My perspective is: We need to do good history, making this as clear as we can. People will take it and do thing we can't imagine."