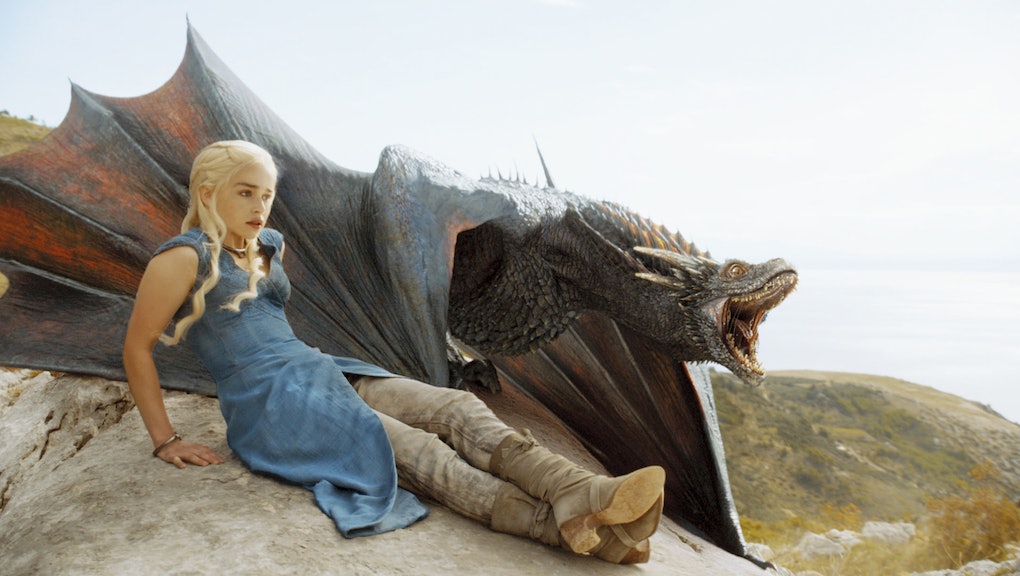 Americans Are Now Naming Their Babies After 'Game Of Thrones' Characters. Here Are the Most Popular.

Game of Thrones star Emilia Clarke has an anecdote about a fan recognizing her in an elevator and addressing her as "Khaleesi," the fictional Dothraki female equivalent of khan. With a surge in Game of Thrones inspired baby names, Clarke may soon be on the other side of the story: 146 baby girls were named Khaleesi in 2012.

George R. R. Martin's epic and brutal fantasy novels have been out in the world since 1996, but it was HBO's 2011 series adaptation that put Westeros on the wider pop culture map. Now Martin's creations are edging into real life. Will we someday have more Eddards, Briennes and Tyrions in our classrooms than Elizabeths, Betsys and Tylers? Well, in 2012 there were more baby Khaleesis than baby Betsys, so the change is here.

The Social Security Administration keeps track of all names registered to U.S. births, and publishes data on names given to more than five babies in a given year. Though five might seem like a tiny number, the truth is even a small uptick represents a cultural shift. From the most recent data, more and more names from pop culture, like Katniss (The Hunger Games), Harper (as in Beckham) and Jessa (Girls), have made their way onto American birth certificates. Have more than a handful of parents been daring enough to call their children Joffrey? Read on to find out.

Peter Dinklage brings the name Tyrion Lannister to life like no other, but starting in 2012, five girls and 20 boys are going to give it their best shot too.

Those 146 Khaleesis have 21 little Daeneryses born in 2012 to help in their quest for the Iron Throne.

Better luck to the 12 boys and five girls than their Greyjoy namesake.

The 178 Catelyns born in 2012 might have half a chance of taking back Winterfell.

This was already an old Welsh and Irish name, but Bran Stark is a little less blessed than his Celtic counterparts. That said, Brandon, his full name, is actually No. 56 on 2012's Top 1000 Baby Names list.

A heartfelt salute to the 18 little girls named after the valiant Maid of Tarth in 2012.

It's super popular in Hungary, but The Hound may have inspired the parents of five boys in 2011 and seven boys in 2012 to look to Ser Clegane as a namesake.