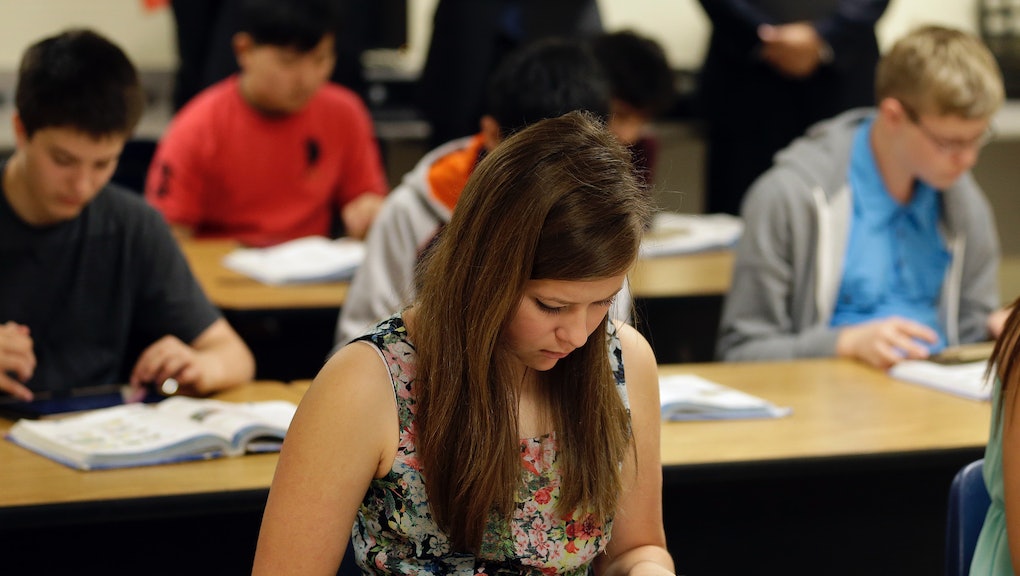 Could You Ace a 6th-Grade Common Core Math Test?

The Common Core, the set of federal educational guidelines being implemented in schools across the country, is attracting a lot of ire. For years, teachers have complained that Common Core will require them to tailor their lesson plans even more to standardized tests. Meanwhile, some education analysts, like the Brookings Institution's Tom Loveless, caution that the program "will have little to no effect on student achievement."

The Common Core's math standards have been under fire recently for unnecessarily complicating subject material for kids. Fox News aired a segment on a frustrated dad's response to his child's headache-inducing homework assignment (pictured below). Even Stephen Colbert picked up on the absurdity, saying, "As it turns out, Common Core prepares our students for what they'll face as adults: pointless stress and confusion."

Is Common Core math so counter-intuitive that you'd have difficulty figuring it out? Let's find out. See if you're able to answer these math problems pulled from a 6th grade Common Core-compliant workbook set.

Hint: Mark your answers separately and check them below.

4. The balance on your savings account is -50, which means that you have $50 of debt. A monthly charge increases the amount of your debt. Which of the following could be your new balance?

7. Calculate the area of the right triangle below.

8. The mean of a data set is 12, and its range is 8. Which of the following values could NOT be value in the set?

How'd you do? Were you surprised by how not heinously confusing the questions are? If so, that's because the media has been telling a slightly twisted version of the truth about Common Core.

Those insane math problems featured on the Colbert Report and Fox News were real questions given to elementary school students. But they weren't Common Core questions, per se.

The Common Core is a set of guidelines for schools to follow. It sets consistent standards for students to meet — it doesn't dictate lesson plans or methods of pedagogy. States and local school districts have flexibility in how they teach math, as long as students learn the required concepts. A "Common Core test" could be as simple and straightforward as the one above.

According to Jason Zimba and William McCallum, the math professors who helped write the Common Core standards, the famously confusing math problems floating around the web are the result of a bad curriculum trying to comply with the standards. As textbook publishers, school districts and teachers grapple with the best ways to incorporate the standards into their lesson plans, they may make some mistakes.

"Like it or not, the standards allow a lot of freedom. People think the Common Core is a curriculum, and it's not. The curriculum authors are going to interpret the standards in different ways," Zimba told the Hechinger Report.

All of that said, there are still countless legitimate criticisms of Common Core, ranging from the fact that the standards have never been field-tested to its one-size-fits-all paradigm, to the fact that it doesn't address significant underlying structural problems actually causing students' underperformance.

The awful Common Core math problems story just isn't one of them.

(The math problems used in this quiz were pulled from Test Prep Review, a website that "provides free unofficial review materials for a variety of exams.")