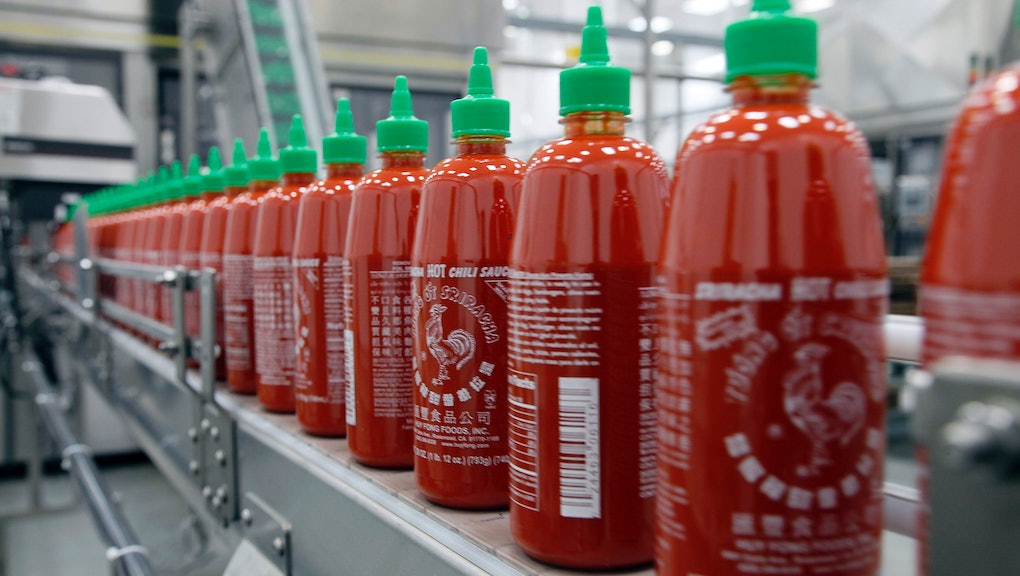 Love Rooster Sauce? You May Have to Find A New Favorite Condiment

The news: This is not a drill, people. The nation's only Sriracha plant is being threatened with a shutdown for the second, and possibly last, time.

Less than five months ago, a Los Angeles County judge ordered Sriracha maker Huy Fong Foods to suspend its operations after residents complained about the overwhelming stench. The city of Irwindale filed a lawsuit claiming the odor caused watery eyes, sore throats and headaches. But now, the city wants to shut down the Sriracha business for good. On Wednesday, the Irwindale City Council voted unanimously to declare the plant a "public nuisance," sparking panic among hot sauce lovers across the country.

The background: The stench comes from the chili, which releases a strong odor when it is ground down. From June to October every year, the Irwindale plant processes millions of pounds of peppers.

November's ruling ordered Huy Fong Foods to halt any odor-causing operations, which wasn't much of an issue since chili-grinding season was over. But now that it's back around the corner, Irwindale officials want to make sure it doesn't become an issue.

But not all hope is lost. The council vote will give Huy Fong Foods 90 days to rectify its odor problem, after which city officials will be allowed to enter the factory, implement changes and make the company pay for the costs. Huy Fong Foods also has the option to file a restraining order to prevent this from happening at all.

Still, it may not come to that. The Sriracha maker has maintained that it is in the process of installing a new air filtration system, and the stench problem will be fixed very soon. "The company has already committed to resolving the issue and think it will be well in hand by June 1," said Huy Fong Foods attorney John Tate.

And even if the Irwindale plant shuts down, the company has already received offers to relocate. As for the much-feared Sriracha shortage? Not a problem. Huy Fong Foods has 18 months' worth of rooster sauce in storage, and many regional distributors have their own inventories as well.

Irwindale can impose as many rules and regulations as it wants, but it will never take our beloved Sriracha away from us.

All GIFs via Sriracha: A Documentary