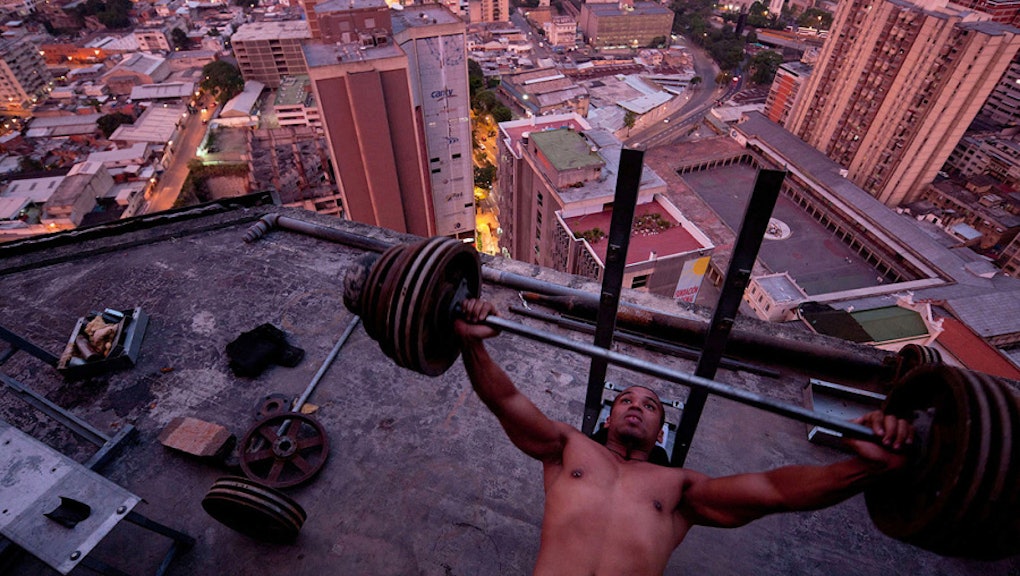 10 Photos Show How People Live in the World's Tallest Slum

Human culture is amazingly diverse. But one radical community is defined by a set of physical challenges: height and gravity. These photos and videos document the society that's developed in Caracas' unfinished skyscraper Centro Financiero Confinanzas, the world's tallest slum.

It was meant to be a world financial center and the third-tallest building in all of Venezuela, a nation known for its sprawling cities and staggering inequality. But in 1994, construction was halted on the building after four years thanks to a banking crisis that saw 17 of the nation's 49 commercial banks fail. Over time, the abandoned building was colonized by squatters from nearby slums. Today, the tower is the world's largest vertical slum — dubbed "Torre David," or "Tower of David," by residents — and hosts a self-contained community of roughly 3,000 people in over 750 families spanning 45 floors, each with their own shops and services. Residents pay a $32 monthly condo fee for 24-hour armed security and run a co-operative mini-government, with non-compliance for the rules being punished with "social work" like chores and repairs around the building.

Caracas is short some two million homes, making the takeover of the CFC building a matter of survival as well as reclamation. Feared as a nexus of crime, poverty and corruption, but also serving as home to a diverse and self-sustaining community, Torre David is a monument to the Venezuela that could have been. Now it's something else entirely. While the tower houses thousands of people who'd otherwise be on the street, it's plagued with the perils that come with poverty and government neglect.

"I have bad news for you," cautions Professor Guillermo Barrios. "This is not a better or nice use of an abandoned structure. In reality this is the 'anti-housing,' the 'anti-residence,' and the government has looked away from the issue."

Plumbing and electrical services have to be provisioned by the residents themselves and are often inadequate. Running water only reaches the fifth floor and the lower levels smell of sewage. The building itself remains an abandoned construction site, and hazards abound. Reuters notes that a young girl fell through the roof to her death years ago, while a motorcyclist who had been drinking drove right off the edge of the parking ramps and died.

Criminal gangs have also been a problem throughout the building's history, with "invasions" by various syndicates and street thugs who wished to use it as a base of operations. The building's general manager, Elvin Marchan, admits that when times were bad, "if someone caused problems, pushing them off a higher storey or shooting them would have been the way of dealing with it." The current de facto leader, Alexander Daza, is variously described as a born-again evangelical Christian and a brutal former gang boss.

But compared to life outside, residents say that the Torre David is a massive improvement.

"I never lived in an apartment before. We're so comfortable now," says 27th-floor resident Thais Ruiz. "We had to get out of Petare and the daily gang shootouts. Once we found a dead body on our doorstep. Now look, we can leave the door wide open."

Other residents admit there are problems. "It's democratic, but it's a nightmare," said 28th-floor resident Joan Torres. "The stairs drive me crazy and I'm sick of scrubbing floors. My neighbour's kids take money off me to do my community chores, but if I don't attend the weekly floor meeting the co-ordinator cuts off my electricity for a week. I'm sick of it."

Spanish photographer Sebastian Liste visited the slum near the beginning of 2013 and took these haunting photos of the tower's residents. "Nothing compares to the experience of walking up the dark stairs, one by one, haunted by thoughts of what might come next," he said, calling the effort to capture the conditions under which the tower's residents survive "a dance between the eyes of the security guards in every corner and the movement of my arm which holds the camera."

For more on the Torre David, check out Reuters photographer Jorge Silva's photo tour of the building at the Atlantic Cities here.