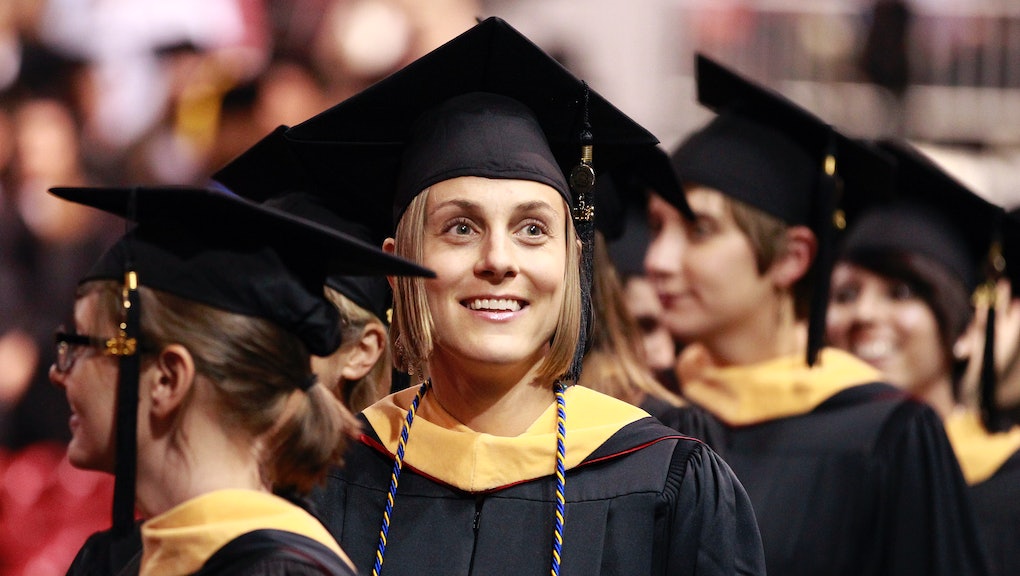 College education around the country is becoming less affordable than ever, putting it more out of reach for those who need it most. But several states are moving forward with a plan to change that.

Oregon and Tennessee have unveiled plans to offer "free" community college for students in those states in a move that, if adopted, could fundamentally realign education in the United States and spur a major economic boom. Everyone, take notice.

The cost of a college education is a running away from us. Between 2000 and 2012, the average four-year college tuition increased 44%. Even public universities, which were established with the intention to provide affordable education for everyone, are becoming inaccessible, as the average public college tuition has increased 71% since 2000. In fact, the majority of Americans (62%) say that public universities are unaffordable.

There's a debate now about whether four-year degrees are even "worth it." But given the clear advantages of higher education in general, accessible community college or technical training post-high school could fill a major void in our education system.

Lawmakers around the country are already moving forward with the idea. Tennessee Republican Gov. Bill Haslam proposed the "Tennessee Promise," a program that would fully cover the cost at two-year in-state colleges for any high school graduate. The plan is part of his campaign to raise the state's graduation rates from 32% today to 55% by 2025, in hopes of increasing job eligibility and overall employment. The Tennessee House approved it on April 15 and sent the bill to Haslam for signing. Oregon and Mississippi are also considering similar programs.

The Tennessee Promise is estimated to cost $34 million each year. Instead of taxes, the funds will come from lottery sales, and the state has about $300 million to spare. The fund will be a "last-dollar scholarship," covering only the fees remaining after all other sources of aid (Pell grants, federal aid, etc.) have been applied. In order to be eligible, students must take 12 credit hours per semester, maintain a 2.0 GPA and complete eight hours of community service per semester. In the words of Haslam, "Net cost to the state, zero. Net impact on our future, priceless."

Typically community college is fairly inexpensive, with a full year’s tuition and fees averaging around $3,300. However, what may seem like a very small price to pay can still be out of reach for those who need college the most: low-income students. In Tennessee, 55.1% of students qualified as low income in 2011.

The plan is by no means perfect and noncontroversial. However, the counterarguments aren't very persuasive. Democrats, such as Tennessee U.S. Rep. Steve Cohen, argue that Haslam's plan diverts lottery funds away from the existing Tennessee Education Lottery Scholarship, which rewards high-achieving students. Four-year colleges fear that it will hurt their enrollment and others wonder if this will actually be effective.

Would it actually boost the economy? Economist Enrico Moretti at the University of California, Berkeley, found in a study that the wages of workers at all levels of education are higher in metropolitan areas with high concentrations of college-educated residents. In addition, Harvard economist Robert Barro found that the rate of return to an additional year of schooling ranges from 5% to 12%. Together the data suggest that by making community college free, it is possible that Tennessee may attract higher-wage jobs and more employers, leading to a stronger economy.

The takeaway: The United States has an education problem, and we need bold solutions. Free community college would be the first step in a radically different approach to education. While the Tennessee Promise plan may have some flaws, it is a serious attempt at tackling the problem and is the kind of bold idea that we need to have the courage to advance.