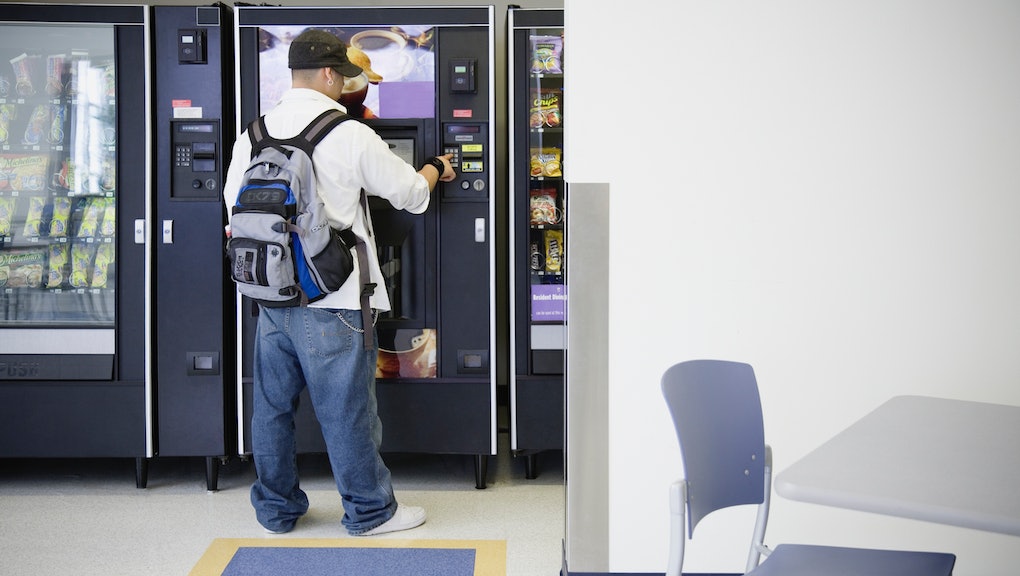 In Colorado, This Might Soon Be How You Get Marijuana

The news: As states across America debate how to move forward with their marijuana policy, Colorado is going ahead with a novel idea that's bound to catch on: a pot vending machine.

Last Friday in Avon, Colo., a company called American Green unveiled the ZaZZZ, "an automated, age-verifying, climate-controlled marijuana dispensing machine." The best part? The prototype can also sell other goodies such as pot brownies and cookies.

Until now, pot vending machines have stayed behind the counter to be used only by the budtenders, which basically defeats the purpose of a self-serving machine. But the ZaZZZ allows the customer to verify his or her identity, make selections, pay for the purchase and leave. Stephen Shearin, the owner of American Green, said the machines will only be stationed at licensed dispensaries and not in public places — and compared their function to the self-checkout line at a drug store.

"Not for everyone, but for those who use it, they love it. Next consider a regular or perhaps a somewhat shy customer who is capable of self-service," he said. "Finally ... consider proprietary products that can be introduced without the dispensary having to change its displays — or manufacturers being able to put products in and see sales for them."

Good for business? There is the question of how these vending machines would impact business. Budtenders who rely on commissions may not like the idea of having their sales taken away by machines, which can't make personalized recommendations like they can.

But Greg Honan, whose dispensary Herbal Elements will be the first to house the ZaZZZ machine, is excited about the possibility of eliminating business costs. "We're looking forward to using the ZaZZZ machine to easily track all this inventory. We're gonna eliminate the middle man," he explained. "The inventory can go directly from the wholesaler, the courier, to our budtender, right into the machine. There's no room for theft by patients, by employees. There's no way to lose track of the inventory."

What now? The ZaZZZ machine won't start dispensing marijuana for a while, but the possibilities are still exciting. The machine's biometric features can help store owners verify customers' identity and eligibility, and it's a great option for small dispensaries that can't afford to hire multiple budtenders.

But perhaps most importantly, the idea of a pot vending machine can help marijuana sales become safer and more mainstream. Marijuana businesses still have a hard time coming across as legitimate establishments, and these machines may get rid of some of that stigma. And maybe one day, buying a late-night pot brownie will mean nothing more than a quick stop at the nearest drug store or corner bodega.