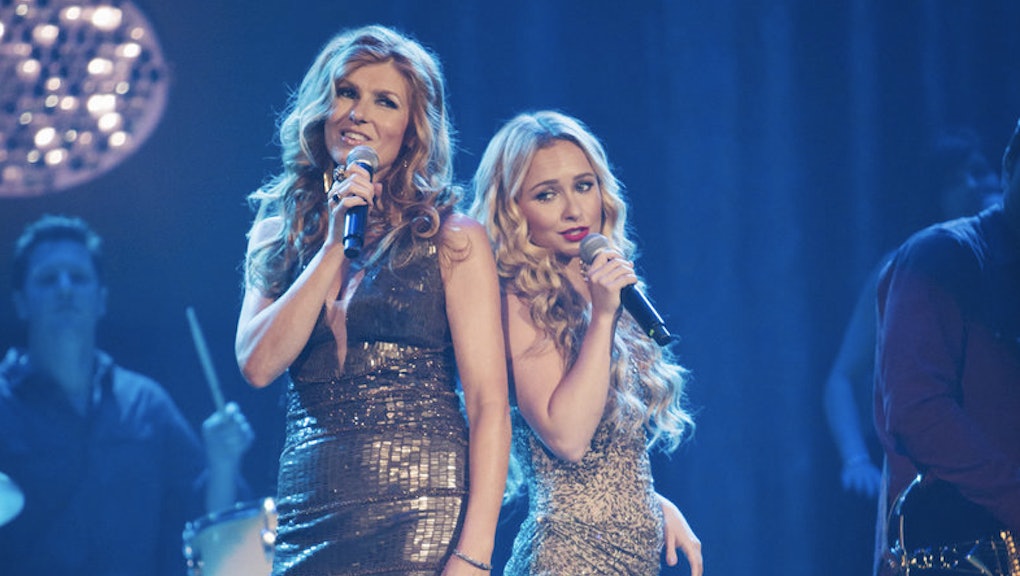 ABC's soapy drama Nashville has brought a lot of attention to Music City. But while the show boasts a (fittingly) killer soundtrack, it doesn't always hit the mark on what it means to live and work in what the New York Times recently deemed the latest "it" city.

Here are 17 things that Nashville gets wrong about the Athens of the South and its No. 1 export, music.

One thing you learn quickly upon moving to Nashville is that no one is actually from Nashville. It's kind of like New York, just in the South. Sure, there are some locals, but in the music industry especially, you run into a lot of transplants who followed one dream or another to this music city's doorstep. The abundance of southern-fried accents on Nashville, then, is way off the mark.

Clare Bowen's Scarlett O'Connor is the worst offender of all, affecting a drawl so over-enunciated she makes Dolly Parton sound like a New Yorker.

2. Celebrities don't hang out at Tootsies. Nobody does.

Tootsies World Famous Orchid Lounge is one of the main attractions on Nashville's neon tourist drag, Lower Broadway. In fact, it's so successful as a tourist draw that no locals ever hang out there, and yes, that includes music stars.

It's a little hard to believe, then, that a mega-star like Rayna would ask Deacon to take her there for a drink (unless, of course, her idea of relaxation is being bombarded by out-of-towners in Elvis T-shirts and fanny packs).

You're far more likely to see celebrities at local restaurants like City House or Rolf and Daughters. If you do, though, mind your Nashville manners and leave them alone.

3. No one willingly goes to Murfreesboro.

Deacon's decision to restart his post-accident career at some random bar (Shotgun Sally's, to be exact) in Murfreesboro is one of the show's stranger missteps. So much so that even Avery questions his decision, asking, "Murfreesboro. Why?"

4. Nashville is a (mostly) paparazzi-free town.

Although TMZ did recently open a much-maligned office in Nashville, most celebrities are able to go about their business undisturbed.

In Nashville's most recent episode, though, Rayna is swarmed by dozens of camera-wielding maniacs after her daughter Maddie posts one vaguely interesting YouTube video, which is something that would happen approximately never.

On Nashville, superstars like Juliette Barnes gallivant around town (and shoplift from Kroger) without a bodyguard in sight. The absence of security is as unlikely as the presence of paparazzi.

But a real-life Juliette like Taylor Swift can't leave the house without security. In addition to strange men trying to swim to her Rhode Island home, Swift was recently granted a restraining order against another fan who had threatened to kill "any man who gets in [his] way."

So Juliette, the next time you want to swipe a nail polish, maybe bring a bodyguard or two.

In the most recent episode, Gunnar receives a royalty check to the tune of $400,000. Let's do some math here:

By law, a songwriter receives 9.1 cents for each track sold, half of which goes to the writer's publisher. In order to make $400,000, then, a writer's song would have to sell just under 9.9 million tracks. To put that in context, the biggest-selling song of 2013 was Robin Thicke's "Blurred Lines," which was downloaded 6.5 million times.

Now technically the check was from ASCAP, meaning it was for performance royalties rather than mechanical ones. But still, that number is insane.

7. Labels don't boss their stars around.

Labels are dependent on their major artists for survival. Without big sales numbers, a label like Edgehill Republic can't keep the lights on. In most cases, then, the label is far more likely to bend over backwards for the artist than vice versa.

That's not the case on Nashville, though. Edgehill CEO Jeff Fordham constantly belittles Juliette and tries to dictate her career, which would send most established stars storming out the door.

When Rayna James tries to woo Will Lexington into signing to Highway 65 Records, she sets up a one-on-one meeting at the Mother Church of Country Music, the Ryman Auditorium. Apparently she can do that because she's Rayna James.

Now, for future reference, the Ryman is not available for your private conversation needs, but it is open for daily tours, and, of course, some of the best live music you'll ever see.

9. No one has secret conversations by the river.

What is it with Nashville and the Cumberland River, anyway? It seems like every other episode there's some clandestine meeting underneath the pedestrian bridge, like that's a normal thing to do or something. Can you even get down there? Why were you even hanging out on Broadway if you were trying to keep something secret?

Now, I'm no local politician, but from my experience most conversations regarding unplanned pregnancies, illicit affairs and government scandals are held within the comfort of one's own home. But maybe that's just me.

10. Working in the music industry isn't that glamorous.

Sure, it sounds exciting, but working in the music industry isn't all it's cracked up to be. Nashville shows all the parties and awards shows but leaves out the 14-hour days and middle-of-the-night email emergencies.

Oh, and don't count on getting rich quick. Your boss may drive a Ferrari, but you'll just be grateful when your salary finally hits $30,000.

11. There are venues besides The 5 Spot and the Bluebird Cafe.

Nashville is home to dozens of music venues of all shapes and sizes, but according to Nashville there are only a handful. Granted, The 5 Spot, Bluebird Cafe and Ryman Auditorium are some of the best around, but it's time to start sharing the love.

Need some suggestions, ABC? The Station Inn, Exit/In and the End are all Nashville institutions in their own right.

12. Avery is not an "East Nashville hipster."

Walk around East Nashville and you might as well be in Brooklyn: it's beards, brews and bikes as far as the eye can see. That ABC describes occasional guitarist/frequent lothario Avery Barkley as a "dead sexy East Nashville hipster," then, is as laughable as asking for a Bud Light at your local biergarten.

Want to hipstafy ole Avery? Grow out the beard, get him some thick-rimmed glasses and stick him on a fixie. Maybe then he'll have enough cred to grab a biscuit at Barista Parlor, or to pay $7 for a carbonated coffee beverage that even he won't enjoy.

So yeah, we get it. Gunnar is becoming a successful songwriter. But when someone from the Mercy Lounge calls him up to come play a gig, it rings a little false.

First of all, Gunnar's band has played, what, one show? And most artists are begging venues to book them, not the other way around. So not only does Gunnar live in a magical fairy land where his first royalty check is six-figures, but apparently he doesn't even need to hire a booking agent. Music is so easy!

The whole Lamar/Teddy/Peggy debacle was confusing and unnecessary. Yeah, yeah, Nashville is a drama and that WAS dramatic, but there are already so many interesting story lines that actually relate to both the city and the music industry that it felt gratuitous at best.

So, sorry to disappoint, but there haven't been any assassination plots against local leaders. Just some cranky old rich people who are angry about a new bus program.

15. Co-writers don't always hook up with each other.

According to Nashville, behind every hit is a hookup.

In real-life Nashville, though, writers get together without getting together all the time. And thankfully, their songs are no less emotionally-charged than those of their TV counterparts.

16. You won't get relationship advice from a country star.

...Unless you're listening to one of their songs (in which case, don't take it). On Nashville, though, it's as simple as Gunnar running into Jay DeMarcus (Rascal Flatts) on his way out of a meeting.

The only thing more unbelievable than DeMarcus helping Gunnar with his love life was the ease with which the two set up a co-write for that afternoon. Seriously though, shouldn't a multi-platinum recording artist be a little busier than that?

In the second episode of Nashville, we see a music video by Juliette Barnes featuring the infamous "Musica" sculpture.

Built at the end of Music Row in 2003, "Musica" features several 15-foot high nude figures dancing in a circle. Though the sculpture was meant to convey the joy of music, most locals refer to it simply as "the naked statue."

Even with strategically placed backup dancers like Juliette's, any "Musica" video couldn't be taken seriously. And hey, maybe that's all the more reason to make one.

Correction (4/15/2014): An earlier version of this story stated Gunnar received a mechanical royalty check. In fact, he received a performance royalty check, the profits of which would be calculated differently.