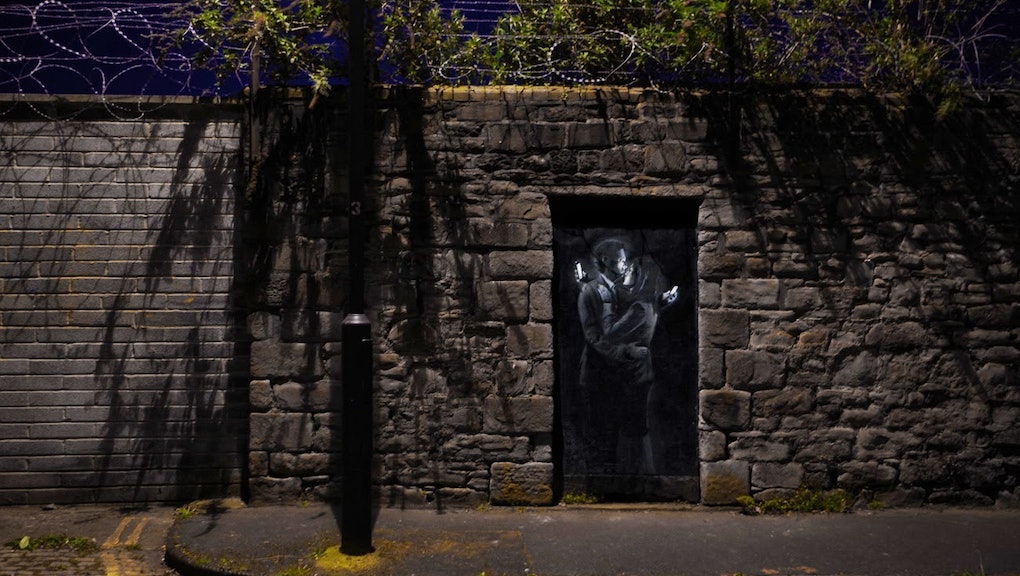 Banksy Is Back! And This Time, He’s Taking on Britain’s Version of the NSA

The elusive street artist Banksy seems to have been very busy over the weekend. Two stirring new works of street art were unveiled in the U.K. — one already claimed by Banksy and the second yet to be claimed but showing all of his famous hallmarks.

Both works use Banksy's signature stencil style. And if they are indeed both his, they work in remarkable conversation with one another, both highlighting the uses of technology as it applies to our public, private and political lives.

The piece causing the most waves popped up between Saturday night and Sunday morning in the town of Cheltenham. The work takes an old-style phone booth but reclaims and subverts it by adding in the images of three 1950s-style secret agents listening in on the phone call.

The work holds particular weight and relevance due to its Cheltenham location. Cheltenham is the home of the Government Communications Headquarters, a British intelligence agency accused of sharing private data with U.S. intelligence agencies, and the mural is an obvious rebuttal to the business of wiretapping. While Banksy has yet to claim the work, sites like Street Art News say it echoes his characteristic "narrative, style and execution."

The second weekend work, definitely by Banksy as it was announced on his website, is "Mobile Lovers." The stencil work also incorporates phones, this time showing the way technology has creeped into our most private moments and emotions, including love.

The piece is somewhere in the U.K., though the exact location is yet to be disclosed.

These are the first works from Banksy since the end of his month-long New York residency last fall. Hopefully the Brits won't take a page from New York's bag of tricks and defame the works right after they go up.