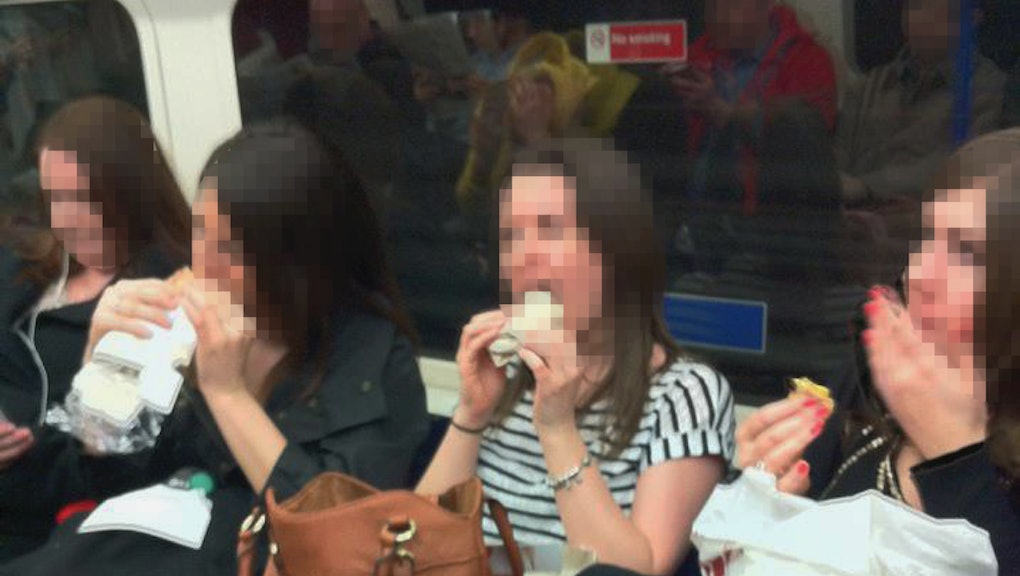 Eating on the London Tube, the city's underground subway system, is no crime, but filmmaker Tony Burke's "art" project, "Women Who Eat on Tubes," has come under increasing fire for carrying out various acts of policing and harassment under the guise of "photography."

The project was originally designed as a Facebook group, but has since spawned a spinoff on Tumblr. The original Facebook page, which is now private, has more than 24,000 members and consists of unsolicited, oftentimes blurry camera phone shots of women eating on public transportation. In a twist that has made some women particularly upset, many of the photos include the time of day and train line where the pictures were taken.

The covert process of taking the pictures intimates that Burke is providing us with something taboo: women eating. Burke's photography insinuates that women are beastly for indulging in such public eating habits. But, even more insidiously, the secretive photos seem to condone or suggest eating disorders, particularly binging, which is cloaked and deliberately hidden from public view.

Protesting that the project has become "mutated" because of how the media has publicized it, Burke insists the project is neither offensive nor misogynistic. "I sympathize with the feminist argument," Burke said in a BBC Radio 4 interview and discussion with dissenting critic Lucy Brisbane Mckay. "But I honestly think that it's irrelevant... Catching people unawares is the art."

Fascinated by the fact that women eat and are conscious of the fact that they are eating in public, Burke continues: "Everywhere I go I see women eating on tubes, like little mice hiding packets of crisps and biscuits in their bags and purses, slowly, secretly, guiltily raising each bite-sized morsel to their salty lips in the hope that no one's watching. Well, I'm watching. And I'm photographing, documenting the fascinating world of the Women Who Eat on Tubes."

For Burke, the project raises issues of privacy and observational art. But many women (and some men) beg to differ. Salon's Mary Elizabeth Williams argues that in fact, the photos are little more than voyeurism.

"First of all, we females don't actually need you to 'embrace and cherish' us, thanks, any more than we need to be compared to rodents or fish," Williams writes, referencing Burke's recent public defense of the group. "Second, we're just humans trying to get from Point A to Point B, possibly eating some French fries along the way. When we open our mouths and put food in them, it's really, I swear to God, not for your entertainment. ... Third, when a caption of three women sitting together on the Tube and eating is 'Three little pigs,' I don't believe you when you say this is about embracing and cherishing. When you note that 'She just couldn't stop jamming those party wafers in her mouth,' I am sensing judgment, sir."

The whole controversy, with its issues of consent, privacy and misogyny, seems a lot like the arguments regarding Women Who Eat on Tubes' Reddit equivalent and "gentler, less sexually aggressive cousin," Creepshots and other Tumblrs of the same ilk.

Are sites like this illegal? In many cases, probably not. But they should also be called out for what they are: intrusive, nonconsensual and generally shudder-inducing platforms designed for entertainment at the expense of women.

It seems highly unlikely that any of the women Burke photographed for his project would have given him permission to do so, calling into question his stated premise that the series "embraces them." Just ask Sophie Wilkinson, a woman who was shocked recently to find her face among Burke's images.

Writing in the Independent, Wilkinson notes that she hopes "by identifying the phenomenon of stranger-shaming, people will think twice before doing it."