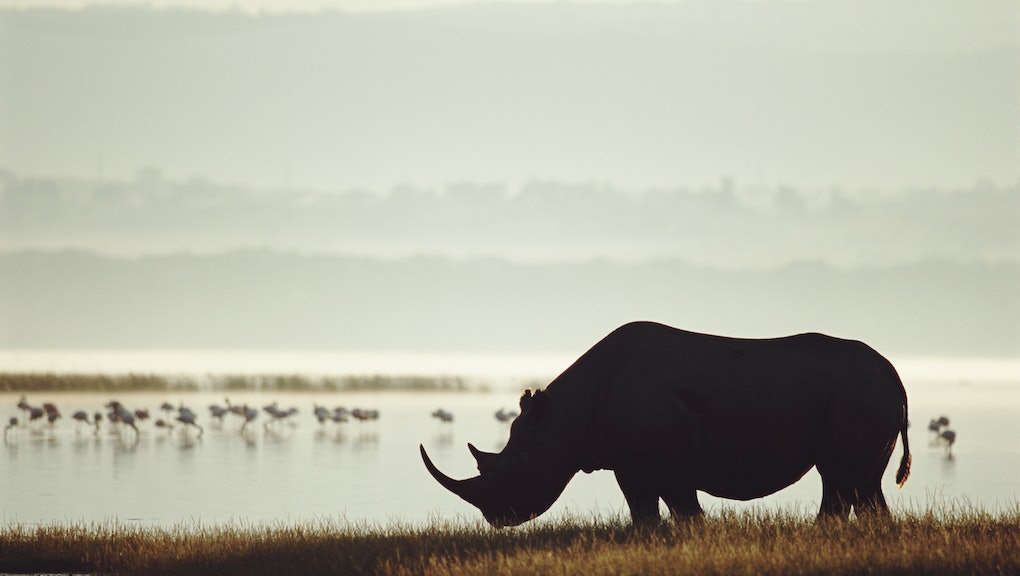 A new estimate by a conservation organization illustrates the alarming decimation of Africa's rhino population: according to the Born Free Foundation, current rates of poaching will wipe free rhinos off the planet by 2020.

The worst part? Not only would we lose an entire species, but the profits from its extinction would go to line terrorists' pockets.

"There are now just 20,000 white rhino and 5,000 black rhino left in the wild. If poaching carries on at the rate it is now for six more years it will devastate the numbers," said Will Travers, chief executive of the Born Free Foundation. "There will probably be no free-living rhinos as the remaining numbers will be fenced off in military-style compounds which are alarmed and heavily guarded by armed patrols."

Horns for terrorism: That staggering spike can be attributed to criminal organizations and militias in Africa, which have mobilized to profit off the vast market for "blood ivory." The illegal wildlife trade generates as much as $19 billion a year, and rhino horn is an especially valuable commodity: according to a July report from the Congressional Research Service (CRS), a kilogram of ground rhino horn can go for as much as $20,000 to $30,000 — making it more valuable than gold, platinum or cocaine.

And the groups that are hunting these rhinos are not your run-of-the-mill poachers. CRS reported that the organizations involved are "highly organized, mobile, and well-financed criminal groups" that use "sophisticated tools to poach rhinos, including helicopters, night-vision goggles, tranquillizer darts, and silenced heavy-caliber guns."

A report by the Elephant Action League indicates that illegal ivory trade is funding as much as 40% of al-Shabaab's operations. The Somali terrorist organization reportedly makes over $650,000 every month from blood ivory. Other groups, including al-Qaeda and Lord's Resistance Army, are cashing in as well.

A grim picture: Though South Africa and other countries are attempting to step up to protect their elephants and rhinos, they may be outgunned by these brutal criminal syndicates. About a thousand park rangers are reported to have died in the past decade while defending the animals.

The U.K. announced last November that it will send 25 British troops to train Kenyan rangers, but that is far from enough. What these countries need is more manpower, money, surveillance and defense tools as well as international backing. As the profits of illegal poaching are increasingly funneled into international crime, it is more urgent and relevant than ever for other countries to step up and contribute.

And attention should not only be on the source of the crime, but on its customers. Illegal rhino horns remain extremely popular in countries such as Vietnam and China, where ground ivory is used for traditional medicine. Though China has increased penalties on traders of poached goods, Vietnam has relatively lax rules (it has already hunted its own subspecies of the Javan rhino to extinction). Cutting off demand at these countries will encourage poachers to hunt less, and that requires international coordination and cooperation.