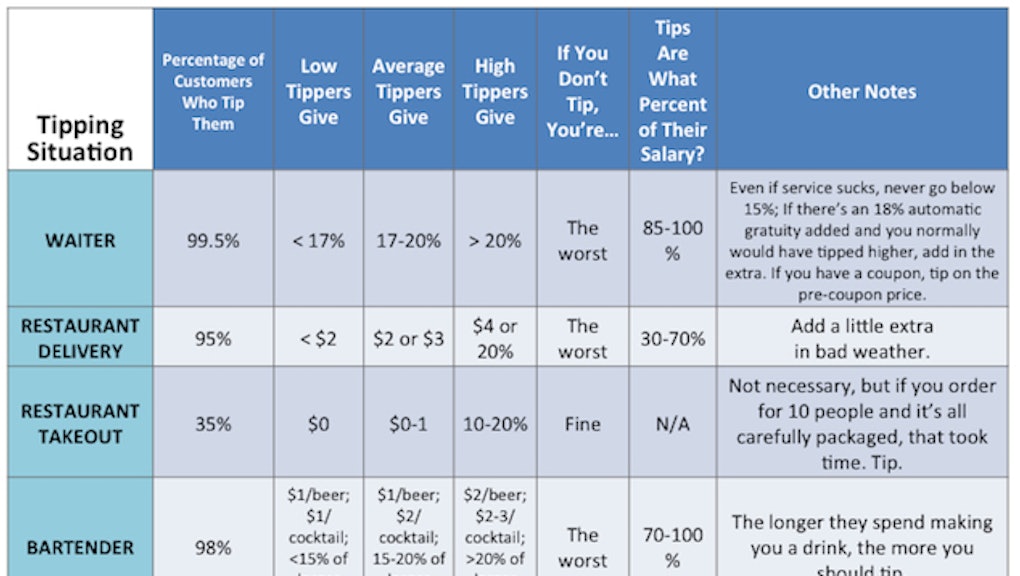 The Definitive Chart for How Much to Tip in Every Scenario

Whether it's a local restaurant, a bar or your go-to ramen place, everyone knows what it feels like when the bill finally arrives and it's time to break out those high school math skills as you try to leave an appropriate tip.

That struggle may become a little bit easier, thanks to this former waiter who pounded the pavement to analyze who expects to be tipped and how much. This simple chart should help you with your tipping decisions, even if you're wondering whether your doorman expects a little more than a box of your grandmother's cookies.

Ten years after waiting tables in college, Tim Urban, who blogs for Wait But Why, decided to find out if other people in the service industry face the same conditions he did — meager salaries and rude guests. So he went around New York City, from Harlem to SoHo, conducting 123 interviews with bartenders, manicurists, valets and delivery men on how much they are tipped and what they expect.

The fruit of Urban's efforts is his anecdotal, but still very informative, chart which succinctly lays down some of the unwritten rules of tipping culture. Knowing when to tip, and by how much, is not just an issue of "etiquette," however, it's an issue of survival for the many service industry workers who rely on tips to supplement their salaries.

Believed to have been imported to America from Europe, tipping is often traced back to Tudor England, according to the New York Times. Today, millions of Americans work far below the minimum wage due to their status as workers who receive tips. Currently, the minimum hourly wage for tipped workers is still a measly $2.13 an hour. And efforts to raise this minimum have been met with staunch opposition from lobbyists and some restaurant associations.

It's a complicated issue, but for your average consumer, the question really boils down to awareness. That's what Urban hopes to help raise with his chart, which emphasizes the perspective of the employee over the employer.

Urban has also compiled an average annual guide for tippers, based on spending habits and financial constraints.

So far Urban's efforts appear to have met with a positive response, especially from internationals and tourists, some of whom said this information should be given out on planes. One of the things that makes tipping etiquette so difficult after all is the way it varies from region to region.

But ultimately, charts like these may become irrelevant, thanks to an American movement attempting to do away with tipping altogether. Recently more and more restaurants have become no-tipping establishments, because keeping a tab of who is getting tipped how much disrupts work atmosphere and encourages an unhealthy dynamic between waiters and bartenders. Some like Restaurant Riki, a Japanese pub in New York, are doing it because it's not in line with their culture and fosters unnecessary competition, while others are just tired of making customers do the math.