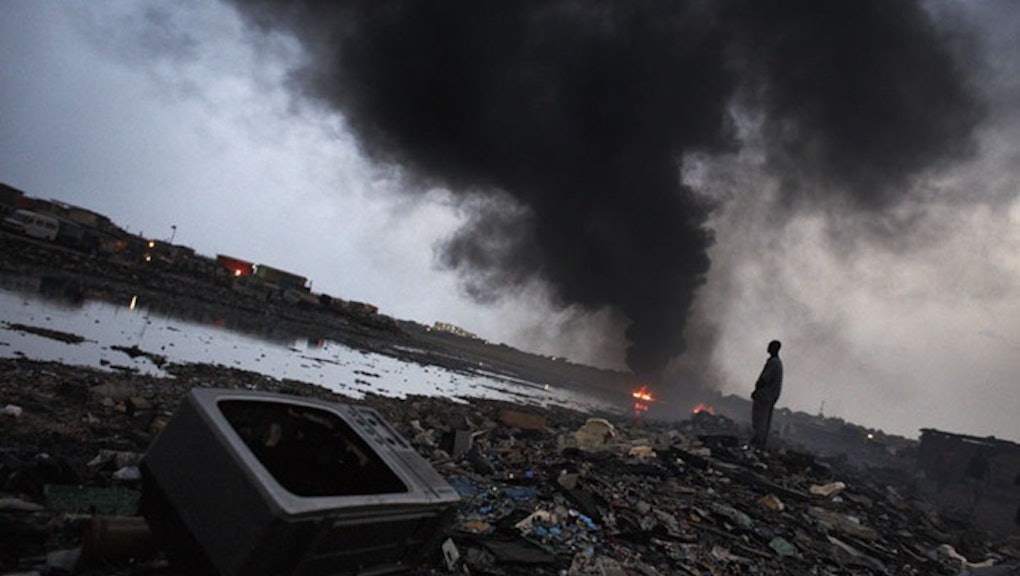 7 Stunning Statistics Show the True Cost of Owning A Smartphone

The iPhone 6 has been called the “most anticipated Apple smartphone ever,” which likely puts it in the running for most anticipated electronic device in recent history. Millions of people will buy, upgrade or rob unsuspecting subway passengers for it, and the image of hypnotized commuters and rude dinner dates transfixed by its glowing screen will become as common as … well, as it is right now with every other smartphone.

In short, business as usual. But there’s a dark side to the story that few people are talking about. Our semi-utopian view of the technologies that, for our generation, have become the equivalent of an extra limb conveniently ignore the troubling process by which they’re made and disposed of.

A prime example is the 10-minute documentary that’s been making the rounds over the past few days, in which directors Heather White and Lynn Zhang explore some of the troubling labor practices and health side effects linked to Apple factories in China. It’s a solid introduction. But in reality, the entire global life cycle of a smartphone, tablet or other such device bears closer examination, if not a massive logistical overhaul:

The point is this: It’s entirely possible to make a smartphone without also producing large-scale human suffering. The process of changing current practices is ongoing, but considering the information presented here, it’s certainly worth investing in further.

Here are seven statistics that show how destructive the production and disposal of a modern electronic device truly is:

1. The computer chips used to build smartphones and laptops require a mineral called columbite tantalite, or “coltan.” Eighty percent of the world’s coltan reserve is in the eastern Democratic Republic of Congo – a well-known war zone.

Since the mid 1990s, the region has seen its share of cholera, volcano eruptions and rebel militia occupation. The names and makeup of the rebel forces have shifted over the years, but one factor remains constant: The mining and trafficking of coltan funds much of their activities.

These groups routinely force children and adult residents of regional cities like Goma into slave labor, mining the mineral which is then purchased by middlemen and sold to major electronics manufacturers. In late 2000, when Sony feared it would not meet its Christmas demand for the Playstation 2, Citibank and other multinationals were at one point directly negotiating with the Rally for Congolese Democracy, a ruthless militia that had been plundering the region and killing or enslaving the locals.

In recent years, coltan has been labeled a “conflict mineral.” Activist pressure has forced many companies to take steps toward “responsibly sourcing” where their coltan comes from, but the progress has been slow, with many failing to respond at all.

The labor force is populated largely by the over 12 million teenagers who must leave home to find work every year in China. They join the 260 million Chinese who already must travel long distances to make a living.

3. At electronics factories in China, a 15-hour workday is not uncommon.

This can include just one day off per month. Workers are often forced to stand for 24 hours straight, cleaning, dusting and assembling devices, all while being exposed to toxic chemicals with no ventilation. In 2011, “aluminum dust build-up” led to two explosions that killed four workers. They are also exposed to benzene, a chemical compound known to cause leukemia.

4. One manufacturing plant saw 14 employee suicides in the span of 10 months.

The Foxconn plant in Longhua, which also supplies Microsoft, IBM, Samsung, Amazon, Sony and a host of others, came under fire in 2010 when 18 workers tried to kill themselves by leaping from the factory rooftop. Fourteen succeeded. Instead of improving its labor conditions, however, Foxconn opted to install these:

Those are nets designed to catch people as they fall. The factory subsequently required employees to sign contracts stating they would not attempt suicide. To this day, Foxconn continues blaming the workers for their depression and maladjustment to its working conditions, and has altered its labor practices very minimally.

And according to GOOD, many countries are finding it easiest to ship their obsolete electronic devices to massive dumps and landfills overseas.

Dumps frequently have to burn this waste to keep its volume at a manageable level, emitting copious amount of CO2 and other damaging toxins into the atmosphere. In the area surrounding Guiyu, China's largest e-waste dump, "residents exhibit substantial digestive, neurological, respiratory, and bone problems," according to the Population Reference Bureau. Eighty percent of the area's children have respiratory ailments, and face an uncommonly high risk of lead poisoning.

This includes 25 million televisions, 47.5 million computers and 100 million cellphones. The ratio of how much we recycle versus how much we simply dump is staggering:

China produces the second most e-waste, with 2.6 million tons.

7. The U.S., European Union, China, Australia, Japan and South Korea produce most of the world’s e-waste. Yet most of the “known and suspected” dumps are in South America, Africa and Southeast Asia.

Is this at all surprising? According to the Guardian, it is illegal to send e-waste to developing nations if it can be “reused or refurbished,” but lots of it is sent anyway under false pretenses. "Much is falsely classified as 'used goods' although in reality it is non-functional,” said a spokesperson for Interpol. “It is often diverted to the black market and disguised as used goods to avoid the costs associated with legitimate recycling.”