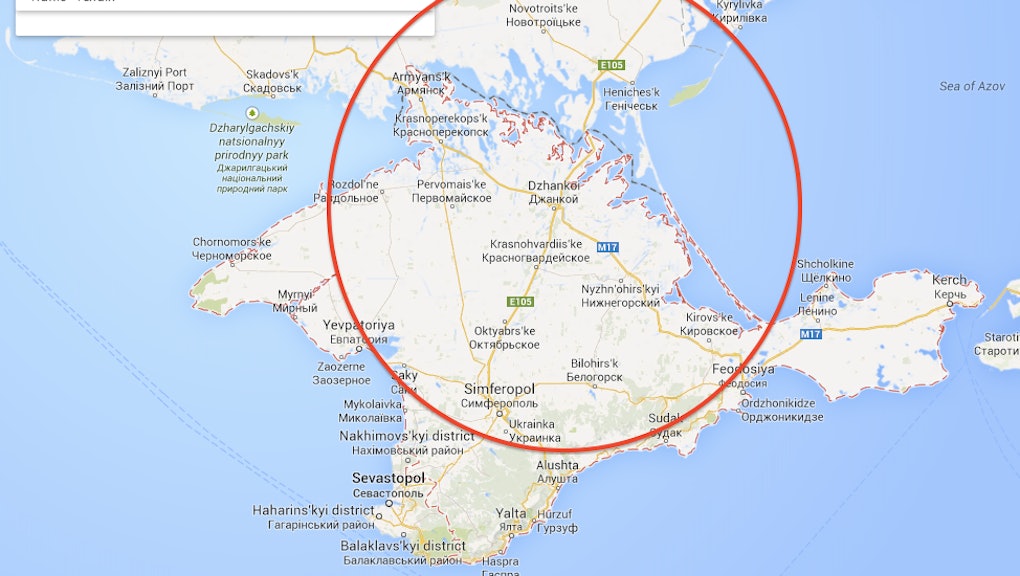 Here's Who Controls Crimea, According to Google Maps

The news: While Russia and the rest of the international community continue debating the territorial status of Crimea, one Western website has gone ahead and deemed the peninsula Russian land — for Russian users, at least.

Right now, if you're outside Russia and go onto Google Maps, you can still find the contested region listed under "Crimea, Ukraine." There is a dotted line separating it from the rest of the country, which means the area is currently under dispute.

But if you access the site from Russia, you see a solid black line between Crimea and the rest of Ukraine, indicating the peninsula has officially become Russian territory.

What does this mean? While the U.S. and its allies consider Crimea "occupied territory," Google Maps prefers not to take sides in land disputes. Instead, it defers to regional definitions of international boundaries for localized versions of its sites.

"The Google Maps team is doing its best to objectively mark disputed regions and landmarks. In relevant cases the borders of disputed areas are marked in a special way. In countries where we have a localized version of our service, we follow local laws on representing borders and use of landmark names," said Google Russia spokesperson Svetlana Anurova.

This policy also applies to South Ossetia and Abkhazia, the breakaway regions of Georgia. Although Russia supports their sovereignty, most members of the international community do not recognize their independence.

According to a NPR report, Google keeps 30 different versions of its mapping platform in as many different countries. But its decision to create alternate borders for Crimea may have stemmed from government pressure: The Moscow Times reported that Russia's media inspection agency was recently asked to examine how Bing, Google and Wikipedia depicted Crimea's territorial status.

While this might look like a simple case of semantics, defining a country's borders has serious implications for geopolitical diplomacy. Maps lend legitimacy to territorial claims, and Google Maps is no exception. The site will likely change as the situation in Crimea — and the rest of eastern Ukraine — evolves, and it will be interesting to see how firmly Google clings to neutrality through this increasingly tense dispute.