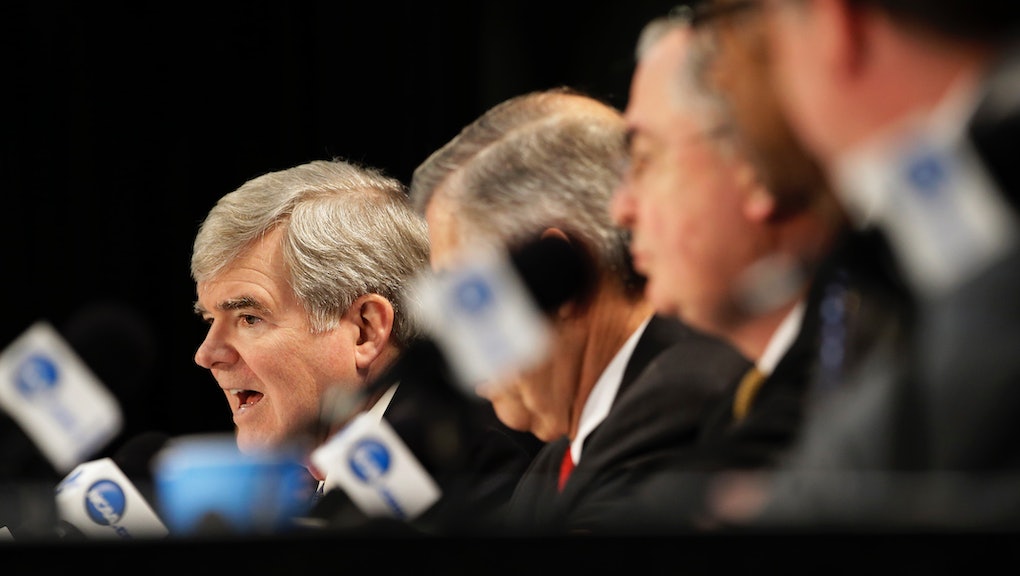 Over the past few years, a groundswell has begun to shape the way we speak about collegiate athletics, surrounding one topic in particular: player compensation.

Now, April 25 looms large as a key date in the battle over a question with major implications: Are college athletes employees of the schools they play for? As the NCAA argues against this change, it's been eye-opening to listen to their hypocrisy.

Last month, football players at Northwestern University took a major step toward redefining the existing model of college sports by moving to be recognized as a union, insomuch as they consider themselves "employees" of the university. The players have until next Wednesday to vote and officially decide if they wish to be represented by a union.

The unionization move was originally spearheaded by now-former quarterback Kain Colter, with a petition filed by the National College Players Association on behalf of Colter and an undisclosed number of his teammates. After a two months of deliberating, the National Labor Relations Board agreed with them in March.

In the defining quote from the ruling, Regional Director Peter Sung Ohr ruled, "I find that players receiving scholarships from the Employer are 'employees.'" That was the shot heard 'round the sporting world.

The hypocrisy of the NCAA in all of this is gut-busting. The multi-billion dollar, nonprofit organization has long been hiding behind the myth of the "student-athlete" for its justification in not paying the ones who keep that gravy train chugging along.

The players are compensated with scholarships they say, i.e., free access to higher education. You know, because education is the primary focus of all Division 1 athletes.

However, according to the ruling, it would appear this line of reasoning, no matter how silly it may be constitutes enough of a transaction for the employer-employee relationship to be legally recognized.

What the players would be demanding with their new found right to collectively bargain amounts to little more than baby steps. They aren't actually even asking for payment of any kind. Colter explained to the Chicago Tribune, "A lot of people will think this is all about money; it’s not. We’re asking for a seat at the table to get our voice heard."

They plan on using that seat at the table to demand more benefits, such as increased safety precautions (e.g. independent concussion experts at games and limited-contact practices). They also want schools to pay all medical expenses for sports-related injuries and for athletic scholarships to cover all costs of attending college in addition to tuition, like the costs of food, laundry, and trips home while on break or vacation. Oh, the horror!

This process as it stands now is still very much in its infancy. The university has appealed the decision, so now it moves on to federal court with many anticipating the Supreme Court having the final say.

"This will go to the Supreme Court, it's such a fundamental change," said NCAA President Mark Emmert. In any case, it will likely be several years before anything is finalized.

However, the attempted unionization, as well as the ongoing Ed O'Bannon lawsuit, which calls bullshit on the refusal to give athletes a cut of the money made from video games using their likenesses, are both serving to chip away at the NCAA's cartel model, and it seems like only a matter of time before it's torn down completely.

Naturally, the NCAA is taking a measured, well thought out approach to the news and has proposed its own suggestions for ensuring its athletes aren't exploited.

Kidding, they're losing their shit. The bosses are freaking out and throwing very public tantrums at the mere notion of a union. They're referring to it as "pay-to-play" and have even released anti-union talking points.

Hell, as of a year ago it was a violation to "improperly accept benefits" in the form of cream cheese on a bagel. Mercifully, that rule was eliminated last year. No word yet on the legality of Nutella however.

Even some right-wing U.S. Senators have weighed in, as this issue provides a fresh opportunity and new angle from which to launch the usual anti-union assault. Richard Burr (R-N.C.) suggested the entire effort is being orchestrated by United Steelworkers as an insidious attempt to bring the union scourge to college playing fields.

Lamar Alexander (R-Tenn.) called the ruling "an absurd decision that will destroy intercollegiate athletics as we know it," to which anyone with the ability to process simple facts should say "good riddance." No where else in the world is amateur athletics wed to higher education and billions of non-profit dollars like it is here, and yet the sports and the schools survive just fine.

This fervent opposition to even the slightest level of compensation for players could amount to the NCAA shooting themselves in the foot. Think of it like refusing a plea deal with misplaced hopes of a full acquittal, only to be found guilty and slapped with a 25-year sentence. One analyst, Jonathan Mahler, actually thinks the NCAA should be begging for a union before the free market has the final word and players, you know, start earning their fair market value.

Regardless of the outcome, whenever it comes, it's fantastic to see some athletes fighting the system from the inside out. Hopefully, it'll serve as a stepping stone toward some common sense reform to one of the more corrupt organizations out there. One can dream.

Seriously though, for God's sake let these kids have some Nutella.