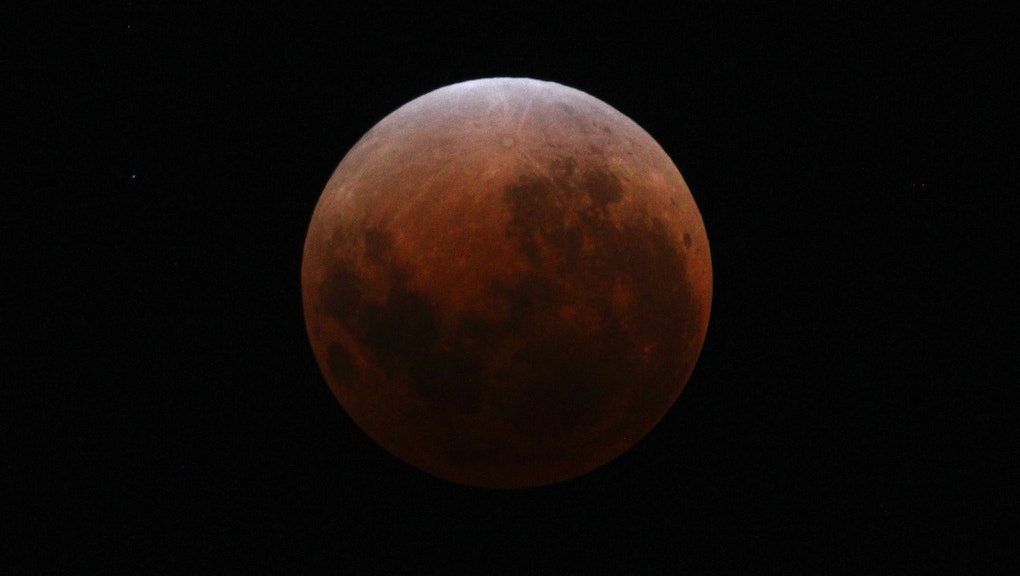 Why Is the Moon Blood-Red Tonight?

A total lunar eclipse happens when the Earth, sun, and moon are perfectly aligned such that the Earth's shadow falls over the lunar body entirely. But it won't block out the moon entirely. Instead, it will make the moon take on a red tint, which depending on the observer's vantage point will appear as any number of shades ranging from copper to a deep crimson. This particular blood moon will be visible from the entire continental United States in addition to Central America and some of South America, and will show on the West Coast earlier than the East.

Sky and Telescope explains lunar eclipse has five stages, beginning with the penumbral eclipse, when the coloring of the moon's leading edge will appear to change. The effect will be weak at first, but become much more striking when "the disk intrudes about halfway across the penumbra." Then ensues the partial eclipse, where the blood-red shadow creeps slowly across the moon, eventually leaving just a bright sliver of silver on its visible edge. The total eclipse will last for one hour and 18 minutes. During this period, the red glow visible on the moon comes from the refracted light of all the sunrises and sunsets across the edges of the globe. (If you were standing on the moon, you would see the earth as a black disk surrounded by a dazzling corona of light.) Another partial and then penumbral eclipse follows as the moon slips out of the eclipse in the same direction.

For viewing purposes, Sky and Telescope assembled a schedule below, where those on Earth can best view each stage according to their time zone. Try to catch the first partial eclipse, which is when the moon will be the most easily visible:

Some evangelical Christians have proclaimed that the blood moon signifies the imminent end of the world - such as best-selling author John Hagee, who claims that "God is literally screaming at the world: 'I'm coming soon.'" As Mother Jones points out, that's patently false. Blood moons are pretty common, with the last falling in December 2011. Though this blood moon is slightly more unusual than others since it marks the first in a series of 4 (the next will fall on October 8), such tetrads of blood moons happen at least every few decades. The last was in 1967, and nine sets of tetrads will occur over the course of the 21st century. So, sorry, the Apocalypse won't be coming, but you will have a rather ominous introduction to April 15's Tax Day. Which for some of us is the same thing.

But definitely watch out for roving packs of werewolves. They are gonna be pissed off tonight.