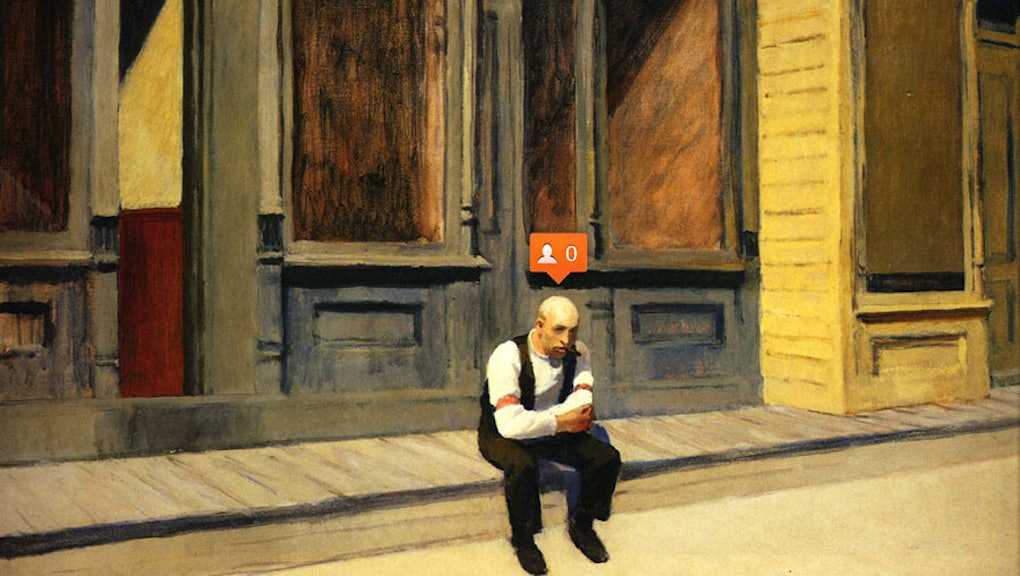 What Fine Art Looks Like in the Selfie Era

Art is a reflection of its era. With that in mind, it's not surprising that, in the age of apps and emojis, Ukrainian artist Nastya Nudnik is using the vocabulary of social media to rebrand familiar images for a digital world.

Her collection, Emoji-nation, reimagines some of art history's most celebrated works by adding symbols from our e-world — a move that challenges our conceptions of "traditional" art and makes museum masterpieces accessible to a wider audience. Nudnik's four-part series doesn't concentrate on a specific time period; it covers everything from Michelangelo to Degas to Magritte. However, for a 21st-century viewer, perhaps her most successful and moving interpretations are based on realist paintings by 20th-century American artist, Edward Hopper. His classic bar scene, "Nighthawks," embodies the birth of the first world problem with its bleak commentary on human interaction. Capitalizing on the desperation and emotional vacancy of Hopper's work, Nudnik uses some of his less iconic canvases for the purpose of her stirring reinterpretations.

If Hopper's paintings are solemn and poignant, Nudnik's social media additions take them into another level of meaning. Her renditions propose a disconcerting vision: In the 21st century, Hopper's loveless wanderers are not only stuck in their minds, they're also glued to their phones. Here, the human experience is little more than liking and posting for others to notice.

Nudnik claims that her feelings towards technology are more positive than negative. Nevertheless, though her oeuvre is playful, it offers a valid (and horrifying) criticism of how we connect. Hopper's figures are captive to their own psychés and when Emoji-nation enters the dialogue, digital obsession only amplifies that terrifying loneliness.

With an ellipsis looming over a woman's frowning visage in Hopper's Summer Evening, Nudnik reminds us of the inner worlds these figures also occupy. Does the emoji kissy face and ellipses pairing represent a past text chat, their thinking in the moment or the fear of the immediacy of real life? Emoji-nation forces us to consider what life would be if it wasn't constantly obscured by a screen.

All images re-printed with permission by the artist.