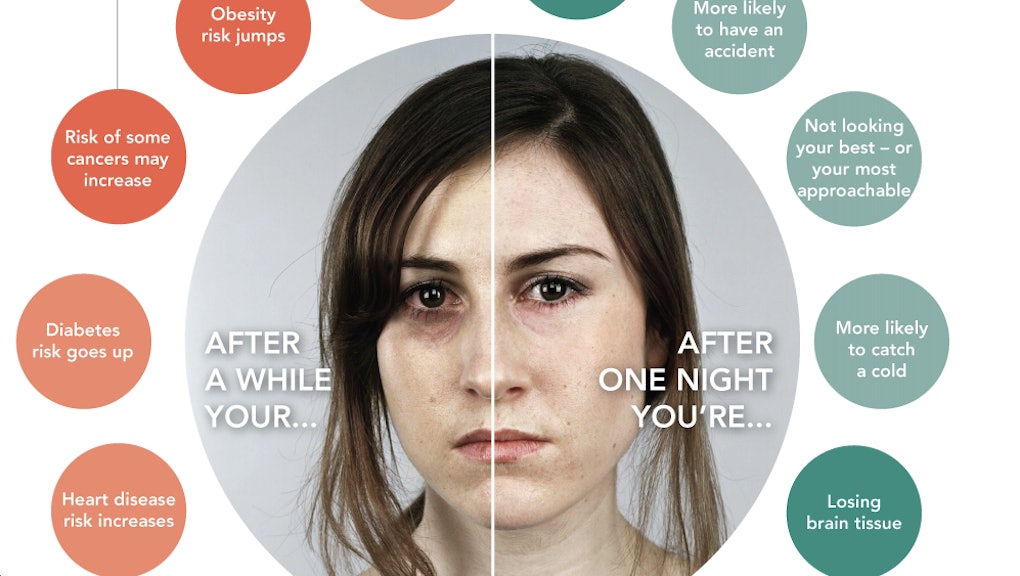 Not getting enough sleep? Just one week of sleeping fewer than six hours per night can lead to serious health issues, including the modification of over 700 genes, reports the Huffington Post on a study published in PNAS last year. Other symptoms of chronic sleep deprivation include everything from bloodshot eyes to quadrupled stroke risk. This infographic from Huffington Post's Alissa Scheller explains:

Humans need seven to nine hours of sleep per night to function properly, but just 59% of American adults surveyed by Gallup in 2013 got enough sleep — way down from the 84% who reported sleeping that much in 1942. Just 14% said they got five or fewer. That's enough to seriously endanger health and well-being in most people. According to the CDC, insufficient sleep is an "epidemic," with a survey conducted by the agency finding 35.3% of people get less than seven hours of sleep on average. A surprising 37.9% reported being tired enough to doze off during the middle of the day in the past month, while an unnerving 4.7% admitted to sleeping at the wheel of a car.

WebMD claims that sleep deprivation can cause accidents, lower your intelligence, numb your sex drive, impair your memory and contribute to depression and weight gain. A survey in 2005 of 10,000 adults between the ages of 32 and 49 found that those who slept less than seven hours a night were significantly more likely to be obese. In March, research published in the Journal of Neuroscience found that prolonged wakefulness permanently damaged locus ceruleus brain cells responsible for keeping mice alert and awake.

"We now have evidence that sleep loss can lead to irreversible injury," said lead study author Sigrid Veasey, MD of the University of Pennsylvania. "This might be in a simple animal but this suggests to us that we are going to have to look very carefully in humans."

"We're shifting to a 24-hour-a-day, seven-day-a-week society, and as a result we're increasingly not sleeping like we used to," the University of British Columbia's Najib T. Ayas told the Washington Post. "We're really only now starting to understand how that is affecting health, and it appears to be significant."

According to former Bellevue Hospital Sleep Disorders Center Director Dr. Joyce Walseban, "Mood and sleep use the same neurotransmitters. It's very hard to tell if someone has sleep loss or depression."

The CDC recommends that people time their sleep requirements according to the following chart, "although there is no 'magic number' as individual sleep needs vary." These estimates should put you in a ballpark range of whether or not you're getting enough sleep.