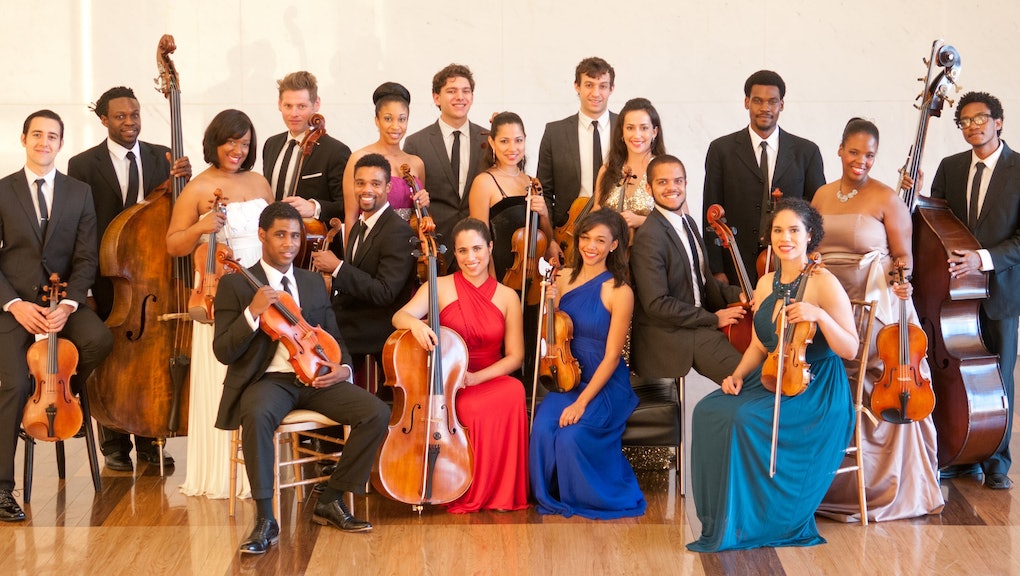 10 Black and Latino Musicians Changing the Face of Classical Music

Let's be honest, the field of classical music isn't exactly diverse. Long dominated by, well, white people, even modern orchestras aren't exactly a great representation of our population. Only 4% of American orchestras are African American or Latino (though Asian demographics are admittedly on the rise). Major classical composers are, let's face it, basically all white European men (Mozart, Beethoven, Bach). Similarly, classical music audiences tend to be older, Caucasian and nearly dead. It's not looking great.

But the Sphinx Organization and its annual competition is looking to change all that. Open to only young black or Latino classical musicians, the competition and its founding organization's mission is "transforming lives through the power of diversity in the arts" and through a whole lot of funding to people who can't normally access classical music. The organization provides needed resoures to aspiring young musicians. With quality instruments costing thousands of dollars, and tuition at major conservatories even more, it's a hard career to try breaking into.

This competition might be the secret to saving classical music. Here are 12 musical portraits of Sphinx kids who will grow up to change the face of the art.

Though only 14 years old, Sterling Elliott has the musical accomplishments of someone far older. That's largely because he's been playing the cello since he was three. He earned the First Place Laureate post of the Sphinx Junior Division this year. But he has also appeared on NPR's From the Top (a feature show on America's most talented young musicians) and won the Jack Kent Cooke Award.

As for his burgeoning career in music, he credits Sphinx for help changing its direction. In an interview with the Newport News, he said, "Before Sphinx, I was stuck between being either a soloist or going into some type of engineering. But now that I've won Sphinx — since it's going to give me so many opportunities with music — there's no reason not to do music now that I have all these chances to do it."

In the meantime, he, his mother and his two other siblings compose the Elliott Family String Quartet.

A viola isn't exactly the most appealing instrument for a kid. Most classical divas find their way to the violin or cello, but Mira Williams is already widely renowned for her viola skill as a 15-year-old.

She's already a winner of multiple music competitions and is the principal violist of the Academy of Music Institute of Chicago. This year, Williams took second place at the Sphinx Competition Junior Division. Williams is also a member of SugarStrings, a very talented string trio run by children. She formed the group with her two younger cousins, Ayanna and Adé, and they have performed for CNN, PBS and Brian Williams' Nightly News.

Hailing from the Milwaukee area, 13-year-old Hannah White has been playing the violin for seven years. She has racked up awards at a large number of competitions, including third place at this year's Sphinx competition for the Junior Division.

Along the way, she has been a soloist for various orchestras, including the Milwaukee and Madison Symphony Orchestras. Pulitzer Prize winner Paul Hayes described her as, "a dose of hope for the future ... pure talent approaching perfection ... a national violin virtuoso."

The First Place Laureate of this year's Sphinx Competition's Senior Division (and the first bassist to ever win) Marietta Georgia's Xavier Foley is not only an accomplished musician, he is also a composer, studying at the Curtis Institute of Music in pursuit of his bachelor's degree.

Xavier wishes to become one of the few musicians to play music composed by himself, especially since the classical music double bass repertoire is solely lacking. But he's an able performer too — he knows what it means to do more than simply play a part: "it's important to not just play the notes, but communicate a feeling to the audience."

Currently, he's studying at the acclaimed New England Conservatory of Music as a violin performance major. In a pretty hilarious inversion of the way most people learn music, he's inspired his parents to take up the cello and the viola. He didn't need their motivation, though: Sphinx is allowing him to do something he needs in his life: "I can’t even imagine myself doing anything but playing the violin"

Nicholas Mariscal is not only the 3rd place winner of this year's Sphinx Senior Division competition, he also already has an album. Titled Nubes Bajas: A Collection of Solo Cello Music from Latin America, its recording was brought about by his win at the Jacobs School of Music's Latin American Music Center's Recording Competition. A Tucson, Ariz., native, Nicholas is also an alumnus of the Interlochen Arts Camp and the famous World Youth Symphony Orchestra.

Karla Donehew Perez is in her late 20s and she's already played at Carnegie Hall. A founding member of the Catalyst Quartet, Karla has also played at the Kennedy Center in Washington D.C. Born in Puerto Rico, she started playing the violin at the age of three and since has played the Berkeley Symphony, the Sacramento Philharmonic, the San Francisco Chamber Orchestra, the Oakland East Bay Symphony, the Sphinx Symphony Orchestra, the Sphinx Chamber Orchestra and the New World Symphony.

A graduate of the prestigious Juilliard School of Music, and holding a Master's in Composition and Film Scoring from NYU, Jessie Montgomery is a veteran of the New York music scene and a native of the city. She understands the importance of blending pop and classical to create accessible music, "A true artist doesn't care from where or whence you draw your greatest influences; it is how you manipulate and package those sources that will entice listeners and continue to bring insight to the art form."

She's one of the founding members of the highly successful PUBLIQuartet, and her compositions have been showcased at New York's SONIC Festival. She is also a two-time recipient of the Composer's Apprentice Award by the Chamber Music Society of Lincoln Center. She, along with fellow Sphinx musicians Karla Donohew Perez and Paul Laraia, is a member of the Catalyst Quartet.

Christopher Johnson is a graduate of the New England Conservatory of Music and holds a Master's from the Manhattan School of Music. He has played in master classes with various well known and respected musicians, including Yo-Yo Ma, Edwin Baker and Jeff Turner.

But he's more than a classical musician: he also plays with Brooklyn's Pitch BlakBrass Band as a percussionist and vocalist, which is a New York based 10-piece band that "represents hip-hop from the 1980s to present day."

Another violist killing it as a solo performer, Paul Laraia has been featured on both NPR and Detroit Public Television. He made his first solo performances with the Pittsburgh and Atlanta Symphony Orchestras in 2011, and he's also a member of the Catalyst Quartet.

Paul's family is from New Jersey and several are musical: his siblings, Steven and Tiffany, also play viola and study at the New England Conservatory of Music and Juilliard, respectively. Paul is a member of the Bela Quartet, and he knows well the importance of music to a community. He's an active participant in community outreach, bringing music to hospitals, inner city schools and nursing homes.

Correction April 19, 2014: An early version of this article included two students from the Sphinx Stars Detroit competition which addresses all genres and cultural backgrounds. The national competition specifically addresses the issue of under representation of Blacks and Latinos in classical music.