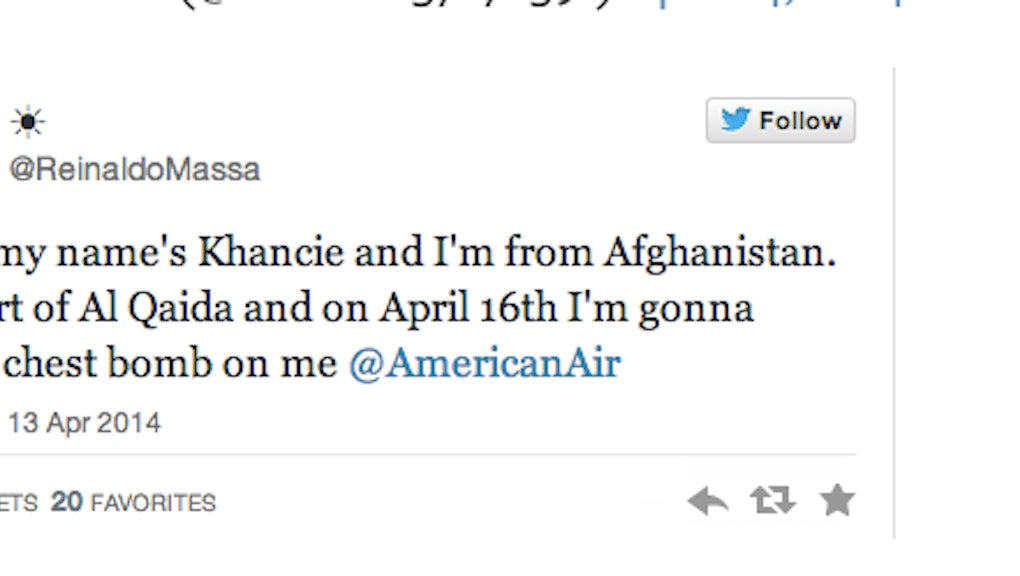 oHere's a piece of free advice for you: Don't tweet fake bomb threats at airlines. Ever.

On Sunday, a 14-year-old Dutch girl was arrested after tweeting at American Airlines. Her crime? Claiming to be an al-Qaida terrorist and sending a threatening message.

Though it may have seemed odd for an alleged al-Qaida member to be a big fan of pop singer Demi Lovato, American Airlines took the threat seriously and immediately took action.

That was enough to set the teen straight ...

Soon afterwards, police in Rotterdam launched an investigation to find out who was behind the account. On Monday, the teen went to the police station with a family member and turned herself in.

There has been no word yet on whether she will be formally charged with a crime, but she has already taught the world an important lesson: to send idle bomb threats to gain viral fame. Apparently, the threat of arrest is not enough to deter fame-hungry young people from doing whatever they can to gain a few thousand Twitter followers.

Of course, this is far from the first time that an airline has received fake threats. In 2010, a British man was arrested for complaining about airport service and threatening to blow it up if it wasn't fixed. But the troubling thing about the Rotterdam case is the legion of copycats it has spawned. Not only do they take up valuable time and resources that should be used, you know, for actual terrorist threats, they also demonstrate next-level Internet trolling that gives no thought to real-world consequences.

The anonymity of social media makes users think these kinds of pranks are untraceable harmless fun, but as various social media platforms become more mainstream avenues for communication and news, people need to understand the consequences of their actions and recognize the age and world we live in.

It's always easy to laugh off these attention-grabbing teenagers as pranksters, but every time they send a dumb tweet, airline authorities and law enforcement officials have to contend with the possibility that it poses real harm. A real threat could be drowned out by the noise of Twitter trolling, and that's no joke.