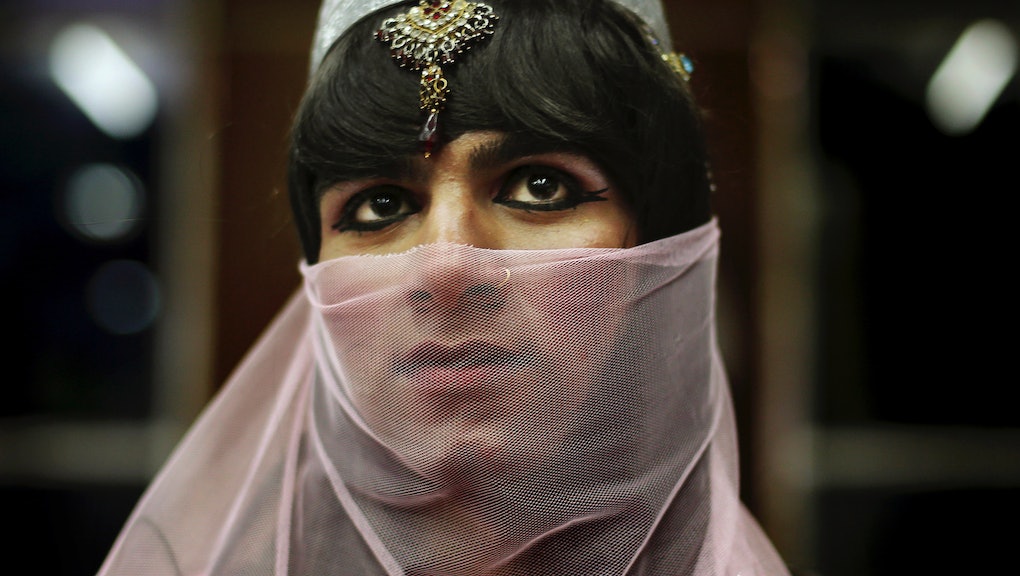 India Is Giving Transgender People a Right That the U.S. Still Won't

A little extra ink could fully enfranchise India's 3 million transgender citizens, just in time for the country's national elections. Thanks to a Supreme Court ruling, Indians who count themselves neither male nor female can check off a third gender option on voter registration forms.

"The spirit of the [Indian] constitution is to provide equal opportunity to every citizen to grow and attain their potential, irrespective of caste, religion or gender," the court wrote in its ruling.

There are, of course, catches.

Throughout human history and all over the world, gender has never been as reductive as one male-female binary, but in India and other South Asian countries, there is a long cultural tradition of transgender hijras, many of whom are now gaining rights and recognitions long denied them.

Yet the path to full equality is not without its difficulties. In 2009 the Indian courts added a third gender to all official government documents, but implementation has not been uniform or swift. Neither has adoption: Only about 28,000 hijras have chosen to register to vote as an OBC, or "Other Backward Class." Assigning hijras this designation is new, but it should give these citizens a leg up in seeking aid, employment and services. Some remain suspicious and disillusioned about the government's intentions, however.

"Politicians come to us seeking votes, but they do nothing for us," said Madhu, a hijra interviewed by ABC Radio Australia. "They don't understand our problems or hardships. Why should we vote for them?"

Because of their unconventional gender identities in an often sexually conservative country, members of the hijra community struggle with poverty and public health issues, including the spread of HIV/AIDS and the risks of engaging in sex work. Activists have had to work hard to ensure the voter registration rolls have properly recorded hijras in the rolls, rather than relying on outdated documents that designate them as male.

"The community is constantly living in fear; there is a lot of police harassment," said transgender activist Anjan Joshi. "The community fears gathering in public places."

"Those who are into sex work, either by choice or misfortune, are being harassed and blackmailed by the police, are being abused physically and sexually by people, criminal elements and the police," she added.

There's a further fundamental problem at hand: dignity and acceptance. "Forget about politicians," hijra Aarti Sharma told ABC Radio Australia. "Our own family members do not respect us."

Recognition in the eyes of state documents may be a small step in the face of such hurdles, but hopefully the movement toward justice can gain momentum from other civil rights struggles in India, including the outcry against and efforts to overturn the recent criminalization of gay sex.

In the words of hijra social activist Laxmi Narayan Tripathi, it's as simple as recognizing common humanity. "Our sexuality can be different, our expressions can be different, but we're as human as any man or woman," she said. "Please treat us with dignity, respect. And a little love."