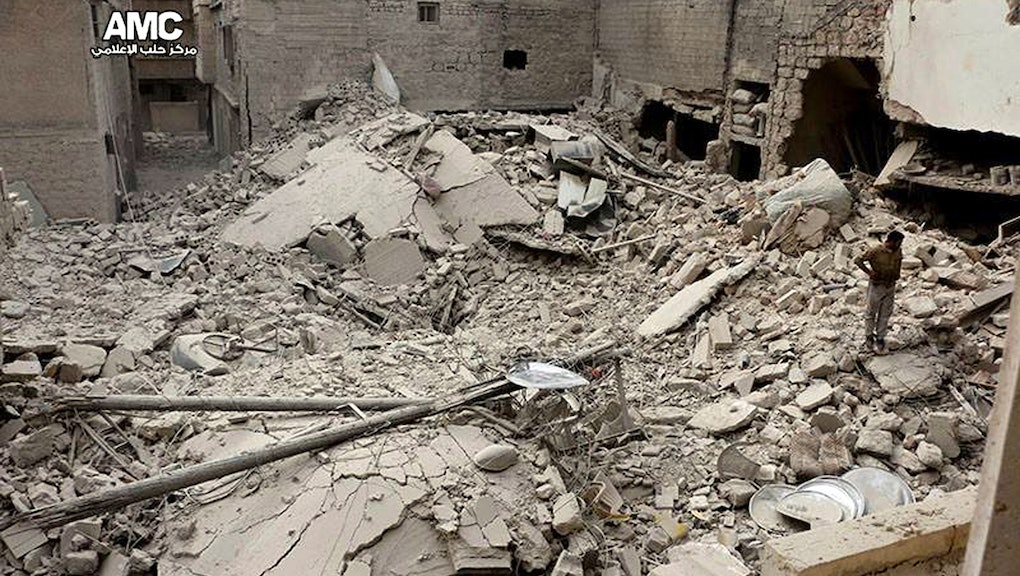 There Was Another Chemical Attack in Syria, and No One Noticed

The news: We're so far past the "red line," you can hardly see it anymore.

On Friday, another Syrian chemical attack took place in the village of Kfar Zeita, and the Syrian government and rebel forces are once again blaming each other for the attack. Around 150 people were affected by the poisonous gases. Two children and an elderly man died.

"A helicopter came and dropped a container," said activist Abdallah Abu Raed. "A sort of yellow dust spread in the sky and coated everything. You can't really distinguish the smell because as soon as you inhale it you pass out."

Footage emerging from a local hospital shows sick people lying on gurneys, as medical workers rush around to deliver aid.

"We are trying to run this down," said Samantha Power, U.S. ambassador to the UN. "So far, it's unsubstantiated, but we've seen, I think, in the past that we will do everything in our power to establish what has happened and then consider possible steps in response."

So will anything happen? Probably not. It's been about eight months since the Aug. 21 attack on the Damascus suburb of Ghouta, which left over a thousand people dead. A month later, a UN investigation confirmed that the nerve agent sarin was used, calling it the "most significant confirmed use of chemical weapons against civilians since Saddam Hussein used them" in 1988.

At the time, Secretary-General Ban Ki-Moon described the attack as a "war crime." But when it actually came to attributing responsibility and holding the attackers accountable, Ban declined to push further. "It is for others to decide whether to pursue this matter further to determine responsibility," he said.

Since then, other international leaders have taken Ban's lead: Though many have denounced the Ghouta attack, there's been little real action.

And if you've forgotten, this was the standard for intervention that President Barack Obama established back in 2012: "We have been very clear to the Assad regime, but also to other players on the ground, that a red line for us is we start seeing a whole bunch of chemical weapons moving around or being utilized. That would change my calculus. That would change my equation."

The line was crossed a year ago, but apparently Obama's equation hasn't changed much.

There's still a lot in the works. Through a deal brokered by Russia, Syrian leader Bashar al-Assad has agreed to give up his chemical arsenal by June 30. Reports indicate that 65% of the stockpiles has been removed from Syria already. That won't stop Assad from making use of the weapons he has left by the June deadline, but for now, world leaders seem inclined to wait and see if he holds up his bargain. After that, perhaps their equation will have to change again.