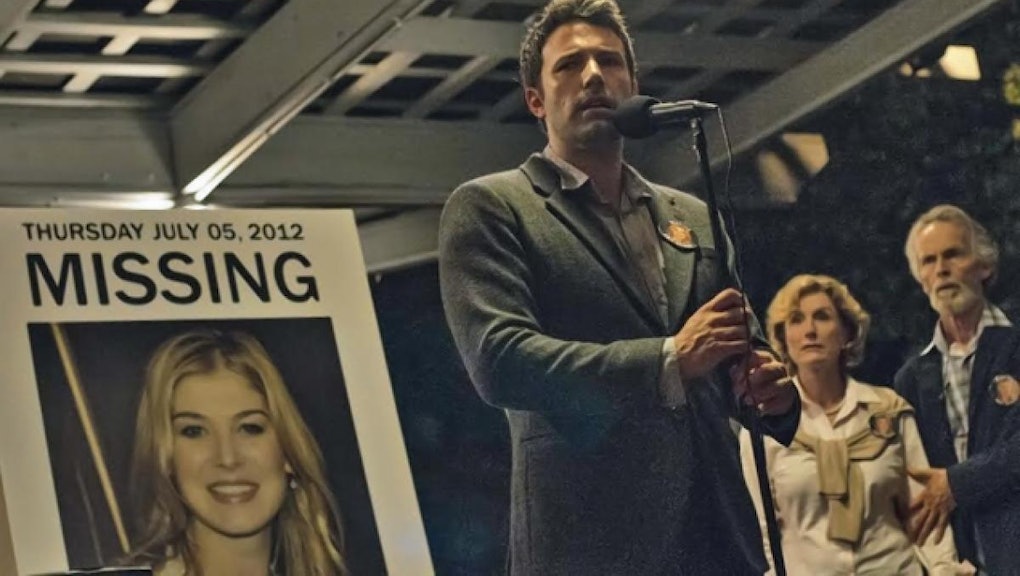 Spoilers for the novel (and probably the movie) below the trailer.

It's coming: The biggest book of the 2010's (so far), Gillian Flynn's Gone Girl, is making the leap to the big screen. Just this week we got a glimpse of the first trailer, and if its producers' pedigrees are any indication (Gone Baby Gone, Zodiac, The Girl with the Dragon Tattoo), it's going to be a hell of a ride. Raised up by luminaries no less than Ben Affleck, David Fincher and the novel's own staggering sales, Gone Girl will undoubtedly be a fall box office smash — but the Internet has a few bones to pick before we get there.

Flynn's staggeringly successful story is about a down-on-his-luck husband whose wife disappears and the subsequent media circus that follows. The book unfolds at a breakneck pace, and while it's been widely-read, it's raised controversy over its depiction of gender.

Like any good bestseller there are questions of the writing quality, but Flynn's book has also been criticized about whether the main character is doing us women the favors Flynn claims she is.

Both Gone Girl and her Flynn's previous novel Dark Places Flynn faced concerns over the characters' sexual politics. As the Guardian points out, "It's true of all Flynn's novels that her women can be reliably predicted to outdo the men in their capacity for moral depravity." A piece in the Observer faults Flynn's main character in Gone Girl for "crying rape." In general, the concern is that the author's work holds a "deep animosity towards women."

But amid an Internet culture so filled with emotion surrounding feminist issues, the movie will be undoubtedly picked to pieces. Is a film feminist if a female character vindicates every men's rights activist on Reddit?

Spoilers below. Really. Don't say we didn't warn you.

To give a little more grounding as to why Flynn's novel received such backlash, look no further than the central plot point, or more specifically, the book's third act. The search for Amy Dunne, protagonist Nick Dunne's vanished wife, ends with the revelation that Amy is not only alive, but has been framing her husband for abuse, rape and murder. Even the reader is implicated as we learn that the diary entries interspersed with Nick's investigation are all fake. It gets even worse: Amy impregnates herself with Nick's semen, just to trap him in their marriage out of spite — this after she decides not to commit suicide as the cherry on top of her scheme. Is it any wonder that readers were upset?

Flynn who identifies as a feminist has answered questions in the past about whether or not her brand of storytelling harms her self-identification. "To me, that puts a very, very small window on what feminism is," she told the Guardian last year. She claims to be bored of the tropes and character types that stock so many books, including "spunky heroines, brave rape victims [and] soul-searching fashionistas."

The question then turns to whether or not the hiccups that ruffled feathers in the book will become the hiccups, and thus the online outrage, of the movie. Flynn, who wrote the screenplay for the film, seems to still have some tricks up her sleeve. Word is that the controversial ending may be totally different. "Ben [Affleck] was so shocked by [the rewrite]," she told EW. "He would say, 'This is a whole new third act! She literally threw that third act out and started from scratch.'" Perhaps she's righted the wrongs, and made her story a little more palatable for her feminist audience.

Are you going to see for yourself whether Flynn fixed what she arguably broke? Gone Girl hits U.S. theaters Oct. 3.