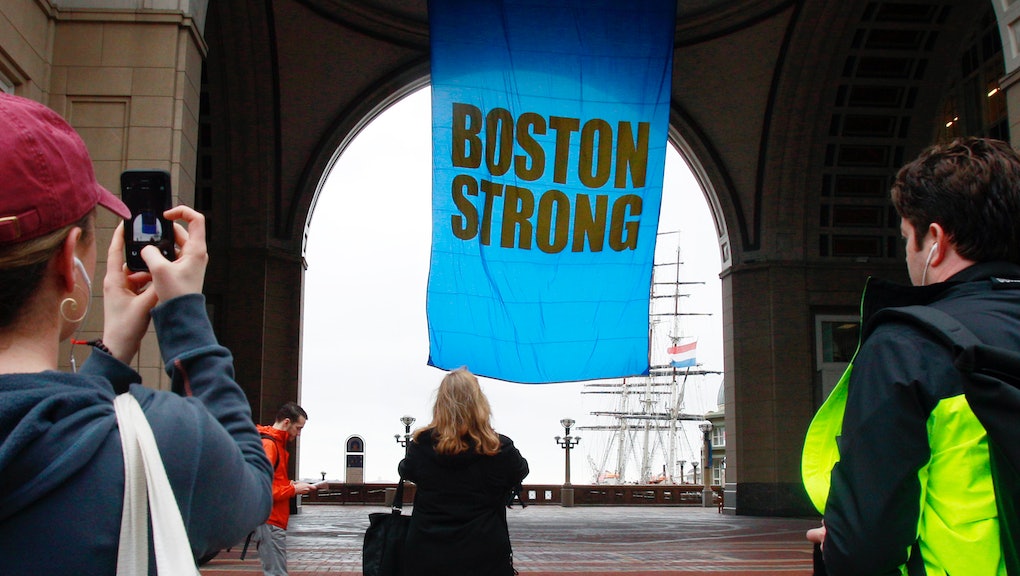 I Was There When the Bombs Went Off, One Year Ago

The horrific attack at the Boston Marathon happened one year ago today. I was in Medical Tent B at that time, about a block away from the finish line, acting as part of a team of nearly 200 volunteers of various medical backgrounds, including nurses, physical therapists, paramedics and physicians.

In moments, Boston would be fundamentally changed.

Initially we saw a steady flow of more experienced runners, finishing at a time of 2:45. They arrived with ailments one typically sees at a race: muscle cramps and hypothermia. By 1 p.m., more and more runners runners trickled into the tent. As it approached full capacity, a volunteer went from station to station urging us to stabilize and discharge as fast as possible to accommodate more runners. That's when we heard the first explosion, meters away.

I never paused: There were so many patients to focus on. Nearly 10 seconds later, we heard a second explosion — that's when we realized we were under attack.

Feeling confused and upset, my concerns, like many in the tent, were focused on the patients we had who were still coming through with running injuries. "We could be next," I kept thinking.

Without a sense of panic, our team leader, Dr. Fred Brennan, a sports medicine physician from New Hampshire who had worked on the front lines in Iraq, informed us in a calm and collected voice that it was not safe for any of us to leave, and that we had to prepare for casualties.

Runners with typical running injuries were still coming into the tent, now along with family members who couldn't find their loved ones. It was heartbreaking trying to help an elderly woman who couldn't connect with her husband, batteries draining precipitously from her cell. My phone was inundated with more than a hundred texts and calls from loved ones, colleagues and even family in Syria who were praying for us.

It was obvious from the emotional trauma we were seeing coming through the tent that something terrible had happened. Nonetheless, our group of volunteers stood our ground until about 6 p.m., when we were told we could leave.

As I walked back home through the Boston Common with a dead phone, I couldn't help but reflect on how, just hours ago, there we were: a team of two hundred volunteers representing every faith and culture from all over the globe who, in the face of tragedy, united for the well being of every person in that tent.

It's common to see providers in a hospital use each others' strengths to save a patient. But it’s incredible see the entire city pull together. Christians, Muslims and Jews drew on the very fundamental aspects of their core values and supported each other, worshipping in each other's houses of God.

That will be a very large part of the legacy of the Boston Bombing: the way residents across ages and faiths banded together to protect each other, that day and in the year since.

After the tragedy, all eyes were on the Islamic Society of Boston Cultural Center (ISBCC), the largest mosque in the Boston metropolitan area. It's a center that is richly integrated into the community and is much more than just a house of worship for thousands of Muslims in the area, who come from all walks of life. It brings different faiths together.

One of the most touching experiences I had was at the ISBCC in Cambridge after the marathon, sitting with Jews, Christians of many different denominations, Hindus and even atheists. Not only was the ISBCC one of the first to condemn the violent attacks, but also one of the first centers to open its doors to runners. They offered counseling for no charge to anyone who needed help processing the tragedy.

“You are not strangers. You are all friends I have yet to meet," said Mayor Henrietta to our congregation of over 200 people.

Out of this experience, people have recognized on both sides that violent individuals do not speak on behalf of religions, and that we are all integral pieces of the fabric of Boston. Immigrants from Muslim counties who may not have felt completely integrated are now feeling more patriotic than ever — that they have an important and positive role in their community. I know many at the ISBCC are excited to attend their first marathon next week, including three from the congregation who are running.

Last Friday, during afternoon prayers at the ISBCC, Rev. Nancy Taylor, CEO and senior minister of Old South Church, stood in the front of the worship room addressing hundreds of worshippers. She eloquently described how over the past year, the interfaith events held in the community bonded us together, and through these new friendships, suspicion and fear were replaced with knowledge and trust.

That is the message we're still preaching today.

"Refusal to automatically link Islam with terror and the willful show of unity is a testament to how far we have come, certainly in Boston and, perhaps, across the country," writes Rev. Taylor.

The events of this past weekend in Kansas City, when the Jewish community endured a painful attack no group should ever experience, should only strengthen our resolve to stand together. On Monday President Obama said, "We've got to stand united against this kind of terrible violence that has no place in our society."

With solidarity and resilience, the very core values that makes us Boston Strong, we can pull on our collective strengths and bring out the best in this country.