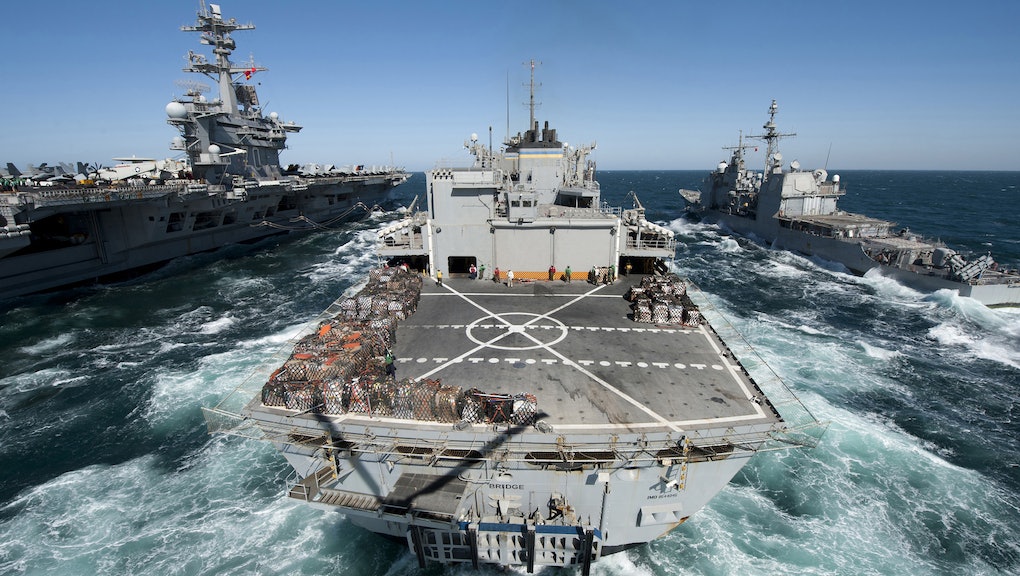 The Navy Just Developed an Outstanding Renewable Energy Source, and Nobody Noticed

In news that has flown under the radar but is sure to rock the fuel industry, the U.S. Navy has announced that they believe they have solved one of the world's greatest scientific challenges: how to turn seawater into fuel. Last week, naval scientists successfully flew a small 2-stroke model airplane running on seawater-derived fuel, proving that engines can run on the energy source they've developed. Essentially the process extracts carbon dioxide and hydrogen from the water and recombines it into hydrocarbon chains that liquefy via a metallic catalyst into a purely synthetic fuel source.

According to the International Business Times:

The development of a liquid hydrocarbon fuel could one day relieve the military's dependence on oil-based fuels and is being heralded as a "game changer" because it could allow military ships to develop their own fuel and stay operational 100% of the time, rather than having to refuel at sea.

Forward-thinking: The Navy realizes that the era of cheap oil is over and points to the new fuel as a milestone after decades of development.

"It's a huge milestone for us," said Vice Admiral Philip Cullom. "We are in very challenging times where we really do have to think in pretty innovative ways to look at how we create energy, how we value energy and how we consume it. We need to challenge the results of the assumptions that are the result of the last six decades of constant access to cheap, unlimited amounts of fuel."

The seawater-derived fuel will be ready in 7-10 years and cost somewhere around $3 to $6 a gallon — pretty expensive. But the Navy already paid about $3.60 per gallon in 2012, while research chemist Heather Willauer's team expects the price of oil to rise significantly enough that the new seawater fuel becomes cost-competitive within nine years.

The current situation: The oil-based fuel brought to Navy ships on the shoreline costs a significant amount to ship and store. The U.S. Navy spends a combined $4-$5 billion yearly on 1.3 billion gallons of fuel. Though it takes an astonishing 23,000 gallons of seawater to make just one gallon of the good stuff, there's essentially an infinite source of raw material. On-board nuclear reactors can provide the energy needed to process the water, meaning it's near-infinitely renewable, and carbon-neutral as well. Some 72 submarines and some of the Navy's aircraft carriers run on nuclear-powered engines, and future crafts could make use of it as well.

Eventually, after testing and re-engineering the process to meet the challenges of converting seawater to fuel on the shoreline on an industrial scale, chances are pretty good you could one day be refilling your gas tank with it as well.

Will it replace fossil fuels for land-lubbers anytime soon? Probably not. But it's still a massive achievement and one that's likely to see widespread use in the future.