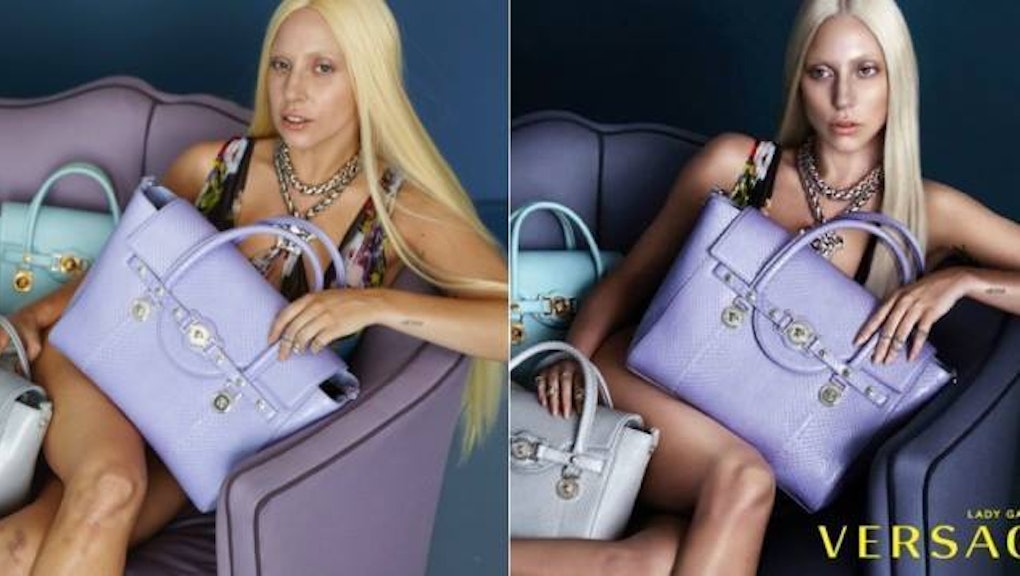 The Media's Obsession With Photoshop Has Gone From Feminist to Destructive

Most women wish that fashion magazines and websites did not Photoshop their models. It creates an unrealistic beauty standard, which is harmful and ridiculous. Unfortunately, while some publications may decide to cut down on the amount of retouching they give their photographs, it seems unlikely that Photoshopping will ever truly go out of style.

Given this reality, the media obsession with policing Photoshopping is starting to wear a little thin. In recent months, sites have made a point of picking over fashion photography, pointing out every blemish artificially covered up and asset altered.

At one time there was a point to all of this. Before awareness of Photoshopping was widespread, these types of stories called attention to an important hypocrisy in American pop culture: the perpetuation of beauty standards so unrealistic they literally had to be painted on celebrities and models.

Then there are the Photoshopping jobs that are damaging because they are anatomically impossible, like this terrible clothing advertisement from Target that created an artificial "thigh gap." Not only are thigh gaps exceedingly rare, impressionable teens need to realize that the body mass necessary to be so thin your inner thighs do not touch is bordering on the skeletal.

However in recent months, it seems like this trend has gotten a bit out of control. With titles incredulously trying to convey some quality of journalism—"The Enigmatic Mystery of Beyoncé's Golf Thighs" — the "feminist" media in particular have latched onto the bodies of celebrities, not the practice, in a way that is disappointingly disempowering. In fact, there is no "mystery" to Photoshop — it is a graphics editing program, and its use has become commonplace in the realm of digital photography.

After years of exposure, why do we still seem so utterly amazed by Photoshop's capabilities and its use by celebrity individuals (Beyoncé), high fashion editorial (Lena Dunham) and high fashion advertorial (Lady Gaga)?

This week, Jezebel ran a widely read piece entitled "What Lady Gaga's Versace Ads Look Like Without Photoshop" in which the author literally explains how Photoshop works. "The finalized images look like they've been color corrected and that the contrast has been upped considerably to give them that glossy Versace feel," notes the author. "Gaga's makeup and wig have also been punched up and some bruising on her knees was removed. Her arms appear slimmer in the final product."

Is this legitimate concern for the female body image? Or has it morphed into something else, something arguably antithetical to feminism — because who is the one actually dissecting women's bodies in a public, (albeit) virtual space? It's not Anna Wintour.

The Dunham item, like the one critiquing Lady Gaga, noted that not that much had been changed, although in general the magazine image made the subject prettier. "While Dunham has not been radically Photoshopped, it's clearer than ever what kind of woman Vogue finds Vogue-worthy: The taller, longer-limbed, svelter version of reality. Vogue is not interested in reality, of course."

Perhaps everyone needs to take a step back and think about what all this policing is really doing to elevate women. At the end of the day, pointing out that Lady Gaga has bruises on her knees and circles around her eyes don't do much in the way of empowerment. But it does make Lady Gaga look bad. The same holds true for Lena Dunham. After her own Vogue  controversy, Dunham noted that the media's hunt for her un-retouched photos seemed like "a monumental error in [its] approach to feminism … It felt gross." Working to hold magazines to high standards of photographic integrity is a noble goal, but let's not become so obsessed that we lose sight of what's really important.