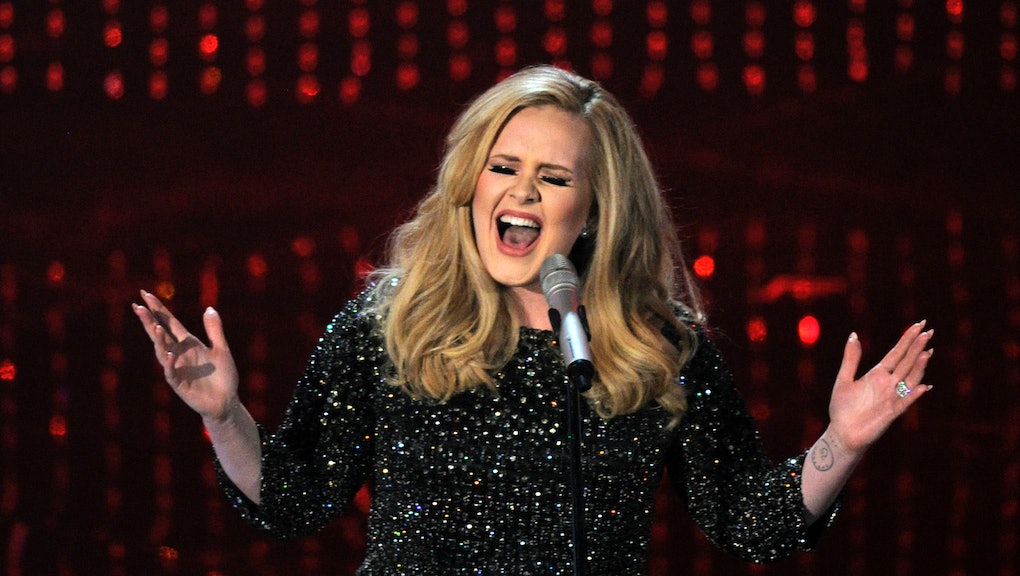 Do you listen to music while at work? Are you at work right now, listening to music and reading this? Let me congratulate you on your multi-tasking skills and reassure you that you are not alone. A new study is out on what Americans listen to while they work, and we have discovered that the decline of America is largely due to Adele.

Streaming-giant Spotify recently conducted a study to determine people's office listening habits, partnering up with researcher Dr. Anneli Haake, a music psychologist frequently quoted in articles supporting music in the work place. They found that almost two-thirds (61%) of the people they surveyed listened to something at their desks, and that the music made them "happier" and "more productive." Or so they thought.

Most people are listening to chart-toppers (34%), followed by rock (29%), and indie (22%). The most listened to artist is Adele (16%), followed by the Arctic Monkeys (14%), Rihanna and Mumford & Sons (13%), and Beyoncé, Bruno Mars, and Katy Perry (12%). To celebrate the research, Spotify created this list of office bangers calling it their "ultimate work day playlist":

The problem is, if you look at the science behind music and the mind, you'll learn quickly that this is literally the worst music you can listen to while you work.

The songs on this playlist violate most relevant scientific research on the qualities make good productivity music. Two separate groups of researchers at Focus@Will and Brain Shift Radio (leading workplace listening apps specifically designed to increase focus and productivity) have concluded that best music to listen to while working is slow (around 60 bpms), rhythmically interesting to keep the mind active, and above all else instrumental rather than emotional. Every study agrees: music with lyrics has "significant negative effects on concentration and attention." In short, please, God, no more Adele:

Participants in the Spotify study actually tacitly acknowledged these negative effects: 20% praised their music for being a "welcome distraction" from their "boring" jobs.

Actually, though, if Fantasy Football is any indication, our listening habits are doing damage to the GDP. Conservative estimates on the sport show that 22.3 million fantasy football owners spend at least an hour a week tweaking their rosters while at work. With some simple multiplication (using $19.33 as the average hourly wage), this results in losses of $430.9 million per week, or $6.5 billion across a 15-week fantasy season.

Imagine, then, how much more LMFAO is syphoning from our GDP, especially when 36% of Spotify survey participants say they're listening between the hours of "9 to 11am, 11am to 1pm, and 2-4pm" — in other words, all damn day.

Still, with demands skyrocketing, wages declining, the length of the workday increasing and job stress rising, you should listen to whatever you please.